Here you will find the complete review of dotOS and also we have shared the complete list of devices to receive the official and unofficial DotOS support.

Android 8.1 Oreo is far better than its predecessors such as Android Nougat, Marshmallow and others. This is because Oreo has refined user interface, it has been significantly optimized to work seamlessly without any cluttering, the apps work perfectly, and the device behaves stable without aborting any apps or service abruptly. But, it is for those who love refining their devices and inducing new features to be used but cannot or don’t want to upgrade to the new OS, you can resort to custom ROMs and when you say that, DotOS is far better ROM than any other as per our tests. DotOS is a blessing for Android users who are using Android smartphones as it has plenty of features that make your phone better than other devices. 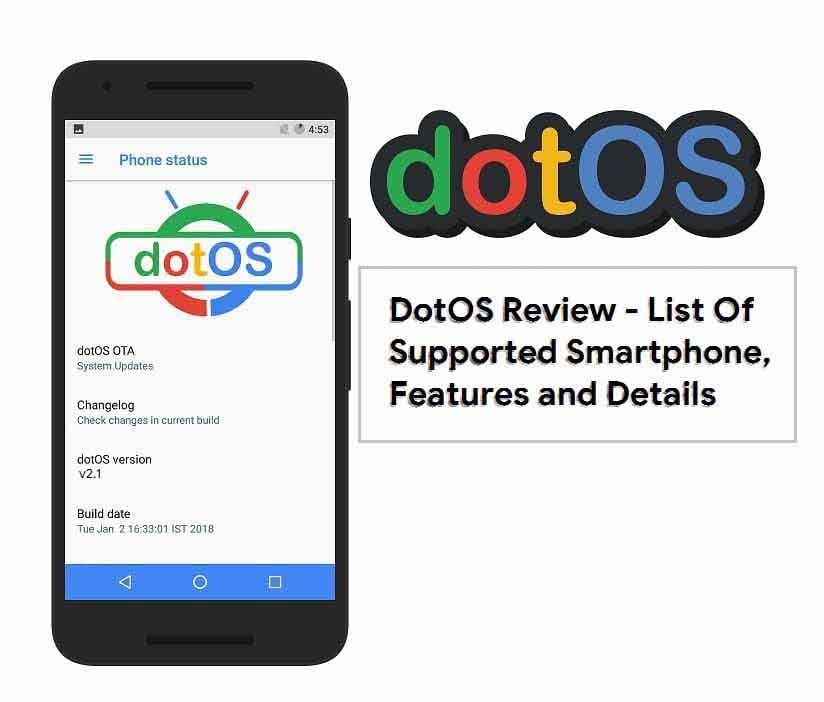 Although this particular review based on the new DotOS, the previous version is equally powerful as this one. DotOS is a highly advanced and refined custom ROM which make use of your phone’s capability and supports features more than what you would earlier use the phone. This is a detailed review of all the aspects of the new ROM that we found exciting and that is something you will feel soon. Most importantly, it touted as one of the best ROM of 2018 with features that are scalable and futuristic.

The new DotOS has refined its audio quality, camera functions and quality, User interface and lagging problem, loading apps and processing it, RAM management, transitions and animations, booting time, benchmark score, battery life and much more since the list is quite long.

Unlike other custom ROMs, the DotOS is far stable and works across all the available smartphone with ease. It has a refined user interface with carefully designed elements such as the notification panel which filled with more tiles and shortcuts used along with a bunch of other tabs on it. New colors have been added in its appearance so that it doesn’t look as dull as Android OSes making it pretty fun to use. The user interface is much cheaper and more beautiful to see and use which can outsmart other ROMs.

The booting time for Android devices varies from model-to-model. Some boot up as instantly as in 35 to 45 seconds while some take over 1 minute to start. However, with DotOS, the booting time is short at just 15 to 17 seconds which is excellent. Although this specified booting up time is only for the few days after installment, the maximum time it takes to boot up after few days is between 20 and 25 seconds which is still far better than other OSes.

Okay, you have an Android device which means you are aware of the fact that using too many apps at once can make the system slower with more cache memory building up that slows the system even further. But what DotOS offers is a seamless stable operating system which has a higher degree of apps and RAM management system pre-installed with it. We used a couple of apps together to check if it lags or not for a period of three to four days and yet, the system never actually crashed, or the apps never stopped working abruptly. To put things into perspective, we use a calculator app, youtube app, a video player, the music app, two games, two social media apps, i.e., eight apps and once were all worked pretty impressive without the system getting frozen, flickering or close apps abruptly.

We were able to toggle between apps pretty quickly. You have to swipe down or up as you set the option in the Settings and get all the opened apps right on a single screen stack one after other without any potential screen freeze.

Android devices are notorious when it comes to battery usage since irrespective of the size of the battery your phone has; the phone will still use most of it in running the background apps and features along with the apps that your use in the foreground. This has severely impacted the battery life but not anymore. With DotOS, the ROM sets a moderate filter on apps like calling, youtube, internet browser, etc. that works as a throttle allowing users to avoid user using the apps that take a major chunk of the battery life.

Unlike other custom ROMs where users are required to search and install upcoming updates on their phone, DotOS provides a built-in feature that allows the phone to receive updates sent via OTA. After receiving the updates, the users can install it to take advantage of the new features and tools.

When listening to a favorite song or watching a favorite or exciting video on the internet, audio quality matters a lot. But not anymore, DotOS comes with a built-in feature that refines and improves the sound quality of the user, thus, giving a more bass-like audio quality rather than giving feeble or low-quality audio.

Android devices have pretty contrasting camera features and quality. In this ROM, you get a developed camera software that has plenty of new options in addition to the one already in use. It is helpful in taking candid shots blurring the background, taking professional quality photographs is easy with it.

List of other features included with this custom ROM

This was a short review of the new and improved custom ROM DotOS. This list also contains names of smartphones for which, the ROM is available to download. You can stick to GetDroidTips for further information and the installation guide and much more.