We all know what Google Pixel smartphone cameras can perform and the quality of images that it can take with just a single lens. Google Pixel smartphones are hands-down the best smartphone in terms of camera performance available in the market right now. Developers have found a way for porting the camera APK for other different smartphones for various OEMs and hence, came into existence the GCam or Google Camera port. Moreover, Google Pixel devices have some solid software processing involved in taking brilliant photos. And, once you use the Google Camera Port or GCam on your device, you will definitely be able to see the difference and what image processing can do to enhance the image quality.

In this post, we will be sharing with how to download Google Camera for Samsung Galaxy A50 and A70 [GCam 6.1]. Recently, Samsung as launched quite a few smartphones this year like the flagship S-series, the budget range M-series and the Mid-range smartphone lineup the A-series of smartphones. We are also awaiting the launch of the Galaxy Note 10 smartphone lineup this August. Moreover, the Galaxy A50 and A70 are some of the best mid-range smartphones available with triple rear camera set-up. And, developers have been successful in porting the Google Camera APK or GCam for these two devices. 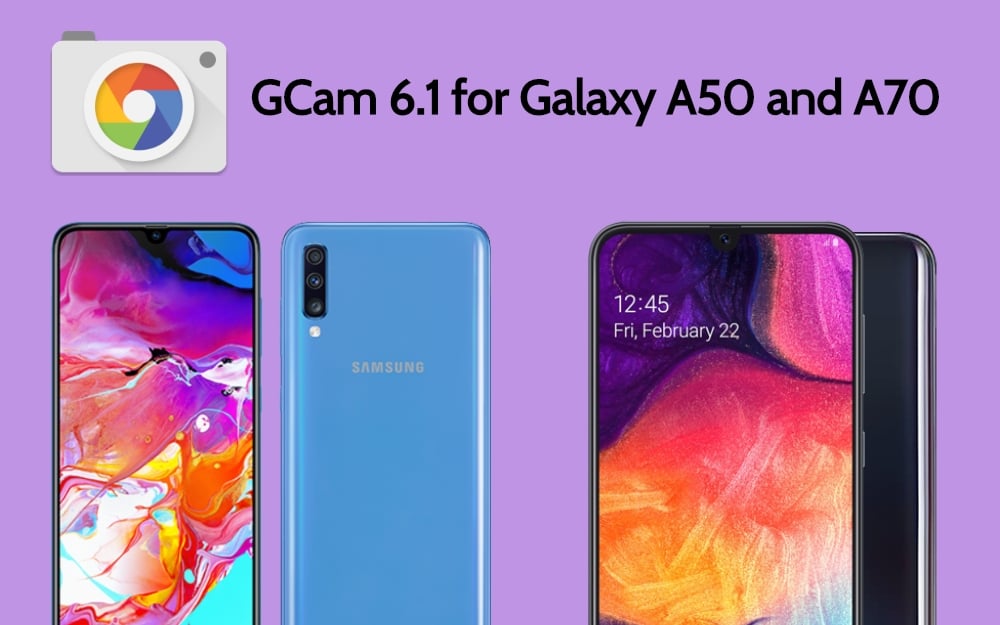 Download Google Camera for Samsung Galaxy A50 and A70 [GCam 6.1]

The Galaxy A50 smartphone is powered by the Exynos 9610 Octa-core processor which is paired with either 4GB/6GB of RAM. It runs on the latest Android 9 Pie and has Mali-G72 GPU. You have the option to buy the Galaxy A50 in two storage options i.e. 64GB or the 128GB version. Moreover, the device also offers to expand the storage capacity to 1TB via a microSD card. In the front, the device has a Super AMOLED 6.4-inch display with a resolution of 1030×2340 and an aspect ratio of 19.5:9 with 403 PPI.

The device sport a triple camera set-up at the back with 25MP (wide)+8MP (ultra-wide)+5MP (depth sensor) shooters. And, in the front, you get a single 25MP camera. One of the best features of the device is that it has the under-display fingerprint sensor as well. The Galaxy A50 packs a battery capacity of 4000 mAh.

Another smartphone from the recently launched A series is the Galaxy A70. The device is powered by the Qualcomm Snapdragon 675 octa-core processor which is paired with 6GB/8GB of RAM. The device sports the Adreno 612 GPU with a storage capacity of 128GB. However, it is expandable up to 1TB via a microSD card. In the front, the device has a 6.7-inch Super AMOLED display with a resolution of 1080×2400 and an aspect ratio of 20:9 with 393 PPI. It is running on the Android 9.0 Pie and Samsung’s OneUI.

The Galaxy A70 sports a triple camera set-up at the back with 32MP (low light)+ 8MP (ultra-wide) + 5MP (depth sensor) lenses. The A70 also offers super slow-mo videos. Under the hood, the device packs a solid 4500 mAH battery that supports 25W fast charging. Moreover, the Galaxy A50 also has an in-display fingerprint scanner as well.

GCam application is a very popular camera mod application which allows the user to take brilliant images by using enhanced image processing which the stock camera application could not provide. There are some features that you get with the Google Camera or GCam application like;

You can install the GCam APK on your Samsung Galaxy A50 or A70 very easily. It is the same as installing any other APK from third party sources. However, you can stick ahead and follow this guide for more information.

Google Camera 6.1 for Samsung Galaxy A50

The triple camera set-up of the Galaxy A50 will allow you to take some breathtaking images with the GCam application. We will be attaching two Google Camera versions, each of which has some different features. You can click the below link to download the GCam 6.1 for the Galaxy A50 smartphone;

If you are using the GCam 6.1 with the portrait mode working then, below are the settings to capture best quality images;

Google Camera 6.1 for Samsung Galaxy A70

The Samsung Galaxy A70 also sports the triple camera set-up but has a different composition of lenses as compared to the Galaxy A50. It has a 32MP low-light, 8MP ultra-wide and 5MP depth sensor lenses. Below, is the download link to the Gcam 6.1 for the Samsung Galaxy A70 smartphone;

Tweak the below settings as mentioned to get enhanced images with the GCam application on the Galaxy A70;

Steps to Install the GCam 6.1 for Samsung Galaxy A50 and A70

So, there you have it from my side in this post. Hope you guys liked this post and have successfully installed the GCam APK for the Samsung Galaxy A50 and A70 smartphones. Please do let us know in the comments if you have faced any difficulties following any of the above-mentioned methods and also do let us know if you faced any app issues as well. Until the next post…Cheers!