In Wube’s Factorio, most players are familiar with building using the building train. However, there is a method of making this process even more convenient. This is by virtue of a powerful new machine featured in the game, known as the building Spidertron!

Along with the car and the tank, this is a non-rail vehicle that can be used for traversing rocky terrain in Factorio. Here we will show you how to build and engage in combat using the Spidertron in Factorio. 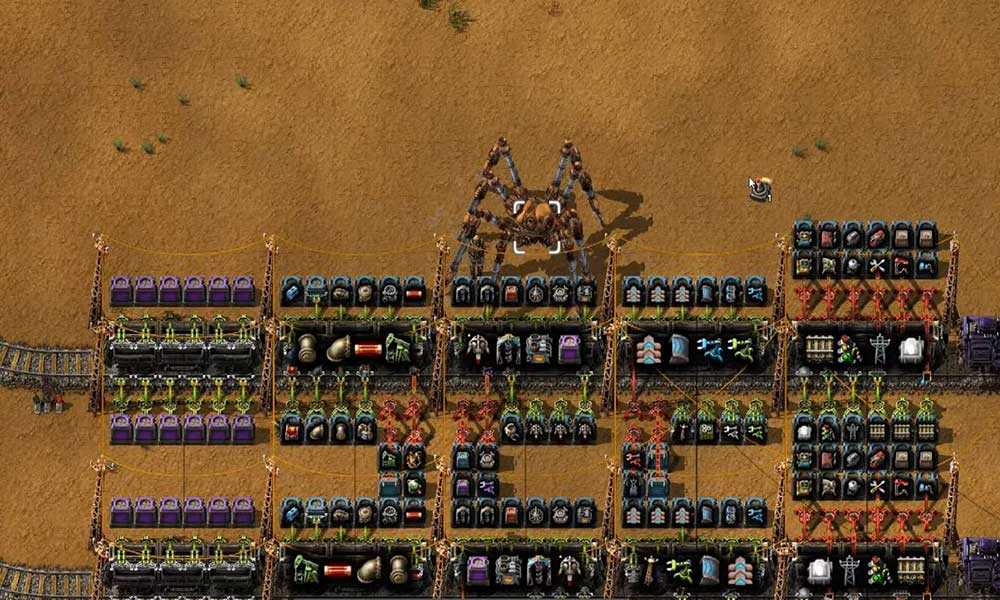 Basics of the Spidertron in Factorio

First of all, you should begin by researching the Spidertron. Fortunately, it does not really cost as much as you might expect. Acquire all of the science packs (except the space science) and go for 30 seconds at 2500 pieces. That will give you both the Spidertron and the remote. Although the Spidertron is a bit expensive, your factory is hopefully up to the challenge by now.

After successfully building your Spidertron, you can locate it in your inventory and put it down in the field, just like you would a car. On clicking it, you will see an option for changing its color and name. These are also visible in the tooltip of the Spidertron’s remote, which you can find in your inventory as well. Click it in the middle and use it to move the Spidertron around. You can do this whether you are sitting in the machine or not. The remote will come in handy for moving your Spidertron to different locations on the map.

Unfortunately, unlike trains, it is not possible to copy the internal inventory. However, you can outfit your Spidertrons for various purposes, such as building the initial parts of outposts. In the case of building trains, you can construct the building train station, but you need to actually go out to that particular location and build it yourself. Now, your Spidertron can do it for you! You can load rails, combinators, ammunition, roboports, explosives, and even free spaces to allow the Spidertron to build stuff for you.

Enhancing and Equipping your Spidertron 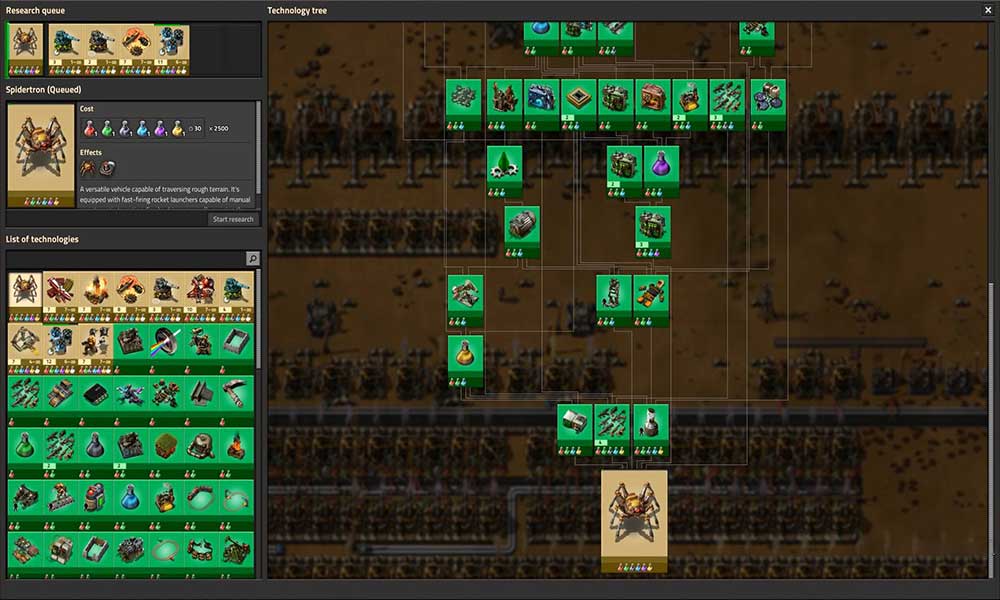 The Spidertron actually possesses its own roboports and can be equipped with Exoskeletons to enhance its movement speed as well. However, it does have its own limitations – you can only see over a small range through it. You can use outposts to load your Spidertrons and send them out for missions.

To load the Spidertron, we advise having three steel chests ready. These will help you have sufficient space for almost everything in your inventory. Turn off personal logistics, open a chest, and then control-click your inventory in the empty space. Load everything into the chests, and load the Spidertron. For this reason, you should try to have all the spaces filtered. In case you run out of space and any stuff is left out, you can put it in an active provider chest. The bots will start putting it all back to refill the chests for the next round.

Apart from this, you can pick up your Spidertron, and it won’t be in your inventory with the same icon. However, you will see it there with its custom name (if any) and color. The remote will become inactive in this process. You can place it down and relock the remote (which will take the color of the Spidertron).   The Spidertron, however, does not keep your filters. So, remember not to pick up a Spidertron that has filters, because you will have to redo everything later!

Building with the Spidertron in Factorio 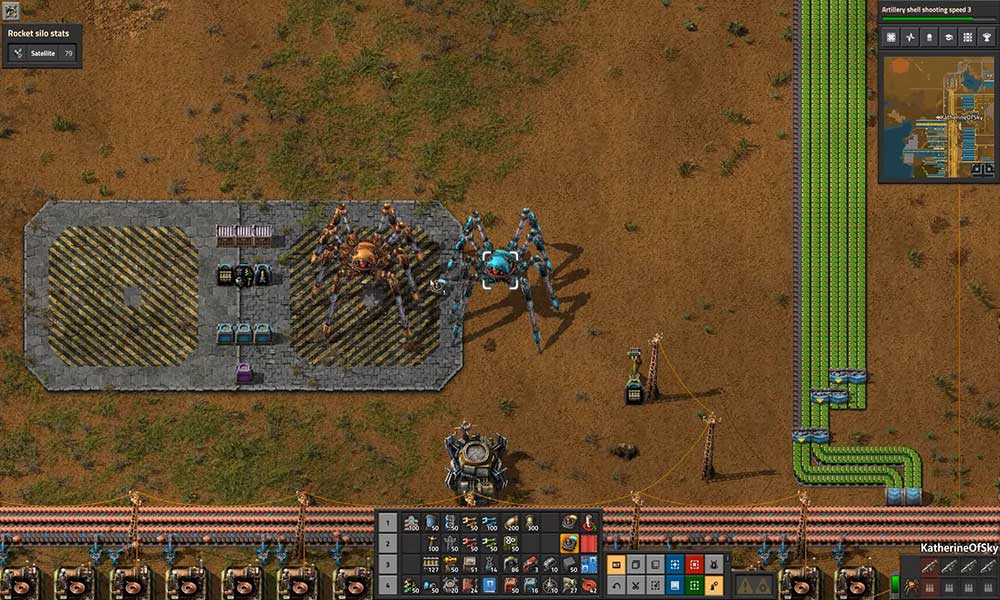 You can make the Spidertron move across the map by putting down radars, and have it build as it goes along. Its speed seems to have been intentionally designed to be a bit on the slower side. That would allow you to switch between blueprints and your remote control more efficiently. Hopefully, the Spidertron will be granted greater radar capacity and be allowed to build in non-radar zones.

Interestingly, even if the Spidertron itself is not able to build something, you should just try to have enough power lines, roboports, etc. This will allow the building train can take all the items out of the chests and start building whatever you want it to. Note that inserters cannot put anything into the trunk of your Spidertron; you need to load it manually. Also, unlike the car and the tank, it is worth noting that the Spidertron’s speed does not change with the surface, it is traversing. Its speed can be enhanced by equipping it with exoskeletons (up to five).

Preparing and Engaging your Spidertron in Combat

You can also use your Spidertron for defensive or offensive purposes. Taking down enemy bases can give you more room for expansion. The machine comes equipped with four powerful rocket launchers capable of both automatic and manual targeting. You can put in energy shields, reactors, personal laser equipment, batteries, ammunition, and even personal roboports for repairs.

Although you can use any kind of ammunition and rockets with your Spidertron, including atom bombs, remember that detonating it nearby would be disastrous. After loading your Spidertron appropriately, you can send it out using your remote control. Keep in mind that the Spidertron cannot trample enemy bases. You need to take down adversaries by shooting rockets at them.

That is it for now. We hope our guide helps you understand all the important concepts related to the Spidertron in Factorio. Now, check out our Windows Guides, Gaming Guides, Social Media Guides, iPhone, and Android Guides to read more. However, if there are any queries or feedback, comment down with your name & email ID. We will try our best to reply soon. Also, subscribe to our YouTube Channel to watch awesome videos on gaming and smartphone tips and tricks. Thank you.