With smartphones developing over time, manufacturers have started introducing devices with a limited number of buttons/keys. Nowadays, we find less than three buttons on our smartphones as physical buttons are replaced with their on-screen digital counterpart. But there is one button which has stayed and will probably stay for a long time and it is the power button. It is quite disappointing when a tiny button ruins the most basic function of their device, especially if it is the ‘Power button not working problem’.

It carries a major responsibility for booting/rebooting, taking a screenshot and most importantly, it allows you to light up the screen and turn it back off. Imagine the situation that you are not able to wake up your smartphone just because the power button is not working. Even the best of us start to panic in such a situation without knowing that the solution is not complicated. A broken power button does not have to mean that your device is now unusable. This article would help you identify the culprit and allow you to fix Highscreen power button not working problem yourself. 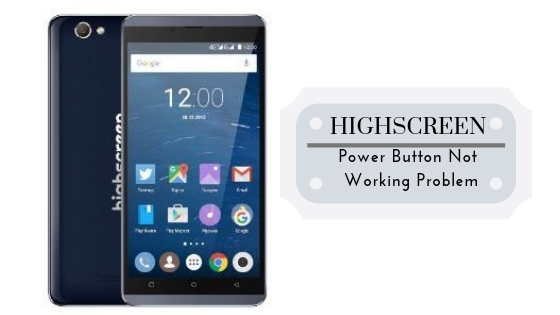 Step 1: Plug in your phone to a charger

If the screen is off, a temporary method you can try to wake your device is to connect your phone to a charger. The moment you switch ON the power supply, the screen becomes alive. Although this method cannot be tried unless you have a charger nearby, you can still use a laptop or power bank if available.

Step 2: Waking UP the phone’s display using other methods

If your smartphone features a fingerprint scanner or facial recognition system, you actually don’t have to rely much on the power button especially for unlocking the device. Some smartphones also have a built-in feature to wake up the screen by double tapping on it. If not, you can always install an application to do so if you can sacrifice some battery life. You can also ask your friends or using another phone to call yourself or drop a message that would eventually light up the screen. After unlocking, you can try other methods in order to reduce the requirement of the power button.

Step 3: Set the phone on be alive

This is a temporary solution to kill the requirement of unlocking your phone every time you need it. You need to go to “Settings >> Display >> Sleep” and then extend the duration to 30 minutes. Now the screen will remain alive for the next half an hour without any activity or touch.  The only issue is that the phone will lock itself if no activity is recorded. So, you just need to tap the screen or perform any activity on your device every 30 minutes if not in use to keep the display on. You can also set alarms for short intervals that would help you keep the screen alive. Although it will sacrifice battery life, at least you will be able to use your smartphone unless you find a fix to power button problem.

Many would wonder how they can reboot the phone if the power button is broke. But there is a technique. You can use the ‘Scheduled Power On/Off’ feature under Settings which allows you to set the time you want your device to turn OFF turn it back ON. You can also restart from the boot menu if your power button is totally not unresponsive.

Uncleared and accumulated cache files hamper system performance. Although, cache data help in faster retrieval of applications, clearing of accumulated cache is necessary. Navigate to Settings >> Apps. Now you will be able to see the list of downloaded applications where you need to tap on each app press ‘Clear Cache’. Remember that you also need to get rid of storage cache placed in the Settings >> Storage >> Cache Memory.

Outdated applications generate bugs and issues that cause the system to freeze and tons of other issues. Therefore, it is recommended to keep all applications updated to improve system efficiency and performance. It can also cause conflicts in the working of a particular button. Some apps that require power button may also be the culprit and its identification is necessary. You can update all the apps on your device by heading to the Google Play Store >> My apps and games and then select Update all. Also, check if there is an OS update available for your device. Developers often send updates to resolve bugs and issues. Updating the OS and firmware might fix bugs related to power button not working problem.

Step 7: Use the volume button as Power Button

Many modern smartphones allow remapping of buttons by which you can use it the volume buttons to wake up your screen. Otherwise, you can use an app anytime. Apps such as button mapper swap the functionality of a volume button to a power button. You can then use your volume button to turn off the screen and light it up again.

Step 8: Use apps to reduce the requirement of the power button

There are some applications such as Button Saviour that add widgets for physical buttons such as for the volume keys, home button, and even the power button. It adds a tiny panel on the screen and serves as Power, volume and Home buttons. You can also get the aid of sensors available on your smartphone. Applications such as Gravity Screen allow you to wake up the screen when you lift your device and turn it OFF as soon as you keep it or face it down. You can also wake up the screen by waving in a particular way over your phone.

You can try a hard reset if you find your power button not totally unresponsive. You can also use the volume down button after remapping the buttons in your device using third-party apps if available. Hard reset will help to fix some issues that affected from malware and other threats. Back up all important user data. Turn OFF the device. Press and hold the volume up button simultaneously until you enter the Recovery mode. Use the Power button as selector and volume button as navigator to choose ‘Wipe data/factory reset’. After your smartphone reboots, try if the problem is resolved or not.

Step 10: Approach to the service center

Unfortunately, if you cannot fix the power button not working problem, the culprit could possibly be hardware related issues in your smartphone. These include dust accumulation beneath the power button etc. It could also be possible that you need to get your power button replaced by a new one. In such cases, it is advisable to approach the service center and ask a technician for assistance. Avoid going to third-party service centers to prevent your warranty to get void.