Smartphones are getting advanced and the batteries are getting bigger but not for all the devices out there. Many of the smartphones irrespective of their battery sizes are facing battery draining problems and Tecno is no exception to it. Since phones are a complicated web of components interleaved into one-another, there’s a lot of scope of anything to go wrong and that is why it is not as easy to figure out what’s causing the battery to drain quickly. This is the reason why GetDroidTips has been constantly providing guides on fixing problems on smartphones encapsulating all the causes and the cures for all the brands and smartphones including the Tecno smartphone series. You can read along to know how to fix this common and annoying issue. 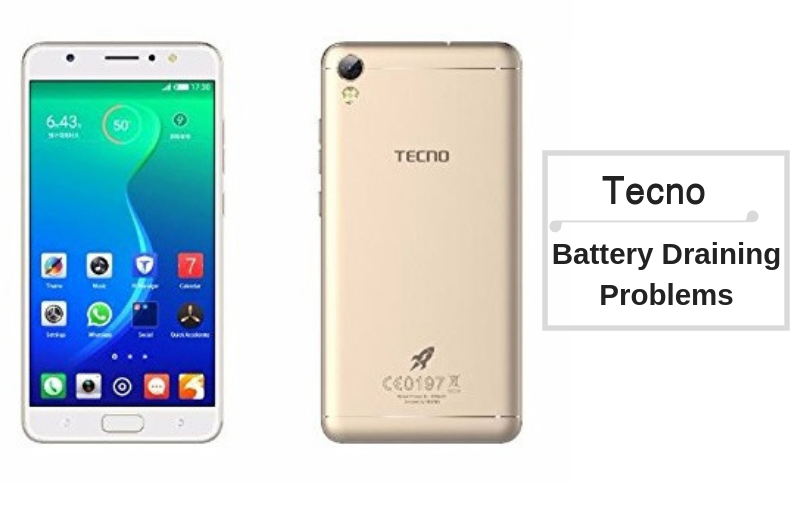 Shut down the phone

This is a common practice wherein you need to shut down the phone and reboot it after a few minutes. This will actually purge all the apps and services, resources being used and free a lot of space on a smartphone and possibly the software glitches (temporary) that might have occurred during the execution of any particular processes or apps. Rebooting the device is an effective solution in most software-related problems so do it right away and then only move towards other methods.

One way to do it is to shut down the phone just like that but that may include saving data from all apps and might take few minutes. Another way around is to simply purge or kill all the ongoing apps and processes both in fore and background that will relieve the phone from excess power consumption and would minimize battery draining problems. Thus, this is a sure shot method. For this, you need to tap on the ‘recent tabs’ shortcut key and kill all apps. Further, go to Settings → Apps → Running and shut down or force stop apps that aren’t required.

This includes Wi-Fi, Bluetooth, NFC, Location, etc which are all connectivity services or features. These are high-power consumptive features and therefore, are required to be active only when needed and not at all times. This could possibly render the humongous battery capacity that you might have useless since it often contributes to the battery draining problems which is a massive issue today when people are clamoring to their devices at all times. To kill all these services, simply roll down the notification tray and tap on NFC, Location, Bluetooth, WiFi, etc to disable it.

Another way to save that last bit of battery is to kill apps and disable those that are not required. Note that this method doesn’t tell you to shut apps but to uninstall those which aren’t required. Doing so will create more space and improve resource allocation to other apps and services which required. For this, you need to select those apps that you aren’t using or you don’t need at all and go to ‘Settings → Apps → Downloaded’ to “Uninstall” these apps. This includes those apps that you had downloaded earlier. On the contrary, to uninstall bloatware or pre-installed apps that aren’t that easy to uninstall, you can disable them temporarily by navigating to ‘Settings → Apps → All’. Locate that unwanted bloatware and ‘Disable’ them.

Do this to minimize battery draining

There are various methods you can deploy to curb the battery draining problems on your Tecno smartphone. Starting with reducing the screen brightness when not required such as during night when keeping the brightness at low is recommended. Further, you can avoid screensavers and live wallpapers to save that chunk of battery power that would otherwise consume in powering these addons features. Further, you can minimize stay awake duration in Settings >> Display.

Well, what if there is no problem at all? What if you are overusing the phone causing the battery to drain faster? It is possible because we live in this era where everything can be done on apps on a smartphone. There are a bunch of heavy and graphic-intensive apps that consume a lot of power thus causing the battery to drain faster. This is where you need to navigate to the ‘Settings → Battery’ where a breakup of battery usage is available.

Further, we recommend our readers to use their phone in snippets or short burst instead of using all its power at a single time that will affect the SoT and the standby timing. I charged my phone 20 hours ago and has been using in short bursts for hours totaling at 5+ hours of SoT and it is still at 35% which makes a lot of sense. So try to benefit from this method and you’ll see that your phone will outperform its former standby and SoT durations.

The cache can create hurdles in the performance of a smartphone. This is why it is required to be cleared as soon as accumulated which is pretty much every day if you will. There are multiple places where cache files are accumulated. Firstly, you can clear the app collected by the apps by diving into the Settings app on your phone and tapping ‘Apps → Downloaded’ and finally, tap on individually and press ‘Clear Cache’ and ‘Clear Data’ to clear said files.

To wipe out storage cache, you need this particular steps: Open Settings >> Select Storage >> Tap on Cache Memory >> Clear/Confirm/Delete. Finally, the last is to wipe the cache partition which is only accessible via recovery mode which you’ll learn in the ‘Restore Factory’ method. Remember to tap on ‘wipe cache partition’ to do it.

Outdated apps can cause a series of problems including app conflicts, abnormal behavior such as draining the battery faster than usual, etc. Thus, it is ideal to update the apps and upgrade to a newer version of firmware (if available) to instill the best of features while steering clear of any potential bugs and errors on the way.

The final resort to fix any minor or major ‘software’ issue is to restore the phone to its original settings. This involves erasing all the data ever saved without any chance to regain it unless you are a techie who knows how to regain the deleted data. Now, you need to boot into a partition called ‘recovery mode’ wherein you can restore it but before doing so, don’t forget to get a backup.

Check if the charger is properly working or not

Using a third-party or incompatible charger can create a lot of issues on a smartphone. For starters, it can invoke screen freezing issues in some cases while other devices might observe slower or faster but less quality charge that drains faster. There are possibly hundreds of things that could go wrong by using a damaged or incompatible charger so beware. Check if the charger is working or not. You can use a different phone to verify if the charger is causing the issue or not.

Check if the battery is okay or not

What if the battery is damaged or if it is old and its performance has degraded? Since lithium-ion batteries have an inconsistent dependency on lifecycle, a phone battery could degrade after several thousand life cycles or maybe more. You need to check what’s wrong with the battery. An app called ‘Amperage’ on Google Play Store detects the amount of battery being charged when connected to a charger and the consumption at the same time which is the usage of the battery to keep the systems running. This will give you an idea if the battery is draining faster than charging or not. I would recommend you to follow the next method before reporting the issue to a service center cause that might help.

Now, there are many assumptions that you can follow to elongate the battery life on an average. Firstly, you can follow a fixed complete discharge and charge cycle wherein you are actually using the phone until it discharges completely before charging it back up.

Another way to do it is to follow different charging proportion such as 80:20 and 90:10 wherein you need to charge the phone to the selected proportion and use the phone until reaching the lower limit before charging it back. This ensures that your phone’s battery is improved over time but note that it is difficult to follow since you never know how much battery you would need everyday so no matter if its a complete hectic day or a calm resting day, you’ll have the same amount of battery at disposal.

Whatever the problem is, you can get it fixed by reporting it to a service center. Now, you need to understand that seeking help from an authorized center is important because you’ll get tailor-made and exceptional service although after paying a premium but your phone will still be in the warranty that would protect it from any further physical damage that could cost you a fortune. On the contrary, third-party service centers are cheap but involve nullifying the warranty period.