It is simply a wholesome experience to play with players using platforms not similar to you. This is what Activision, the developer of Call of Duty Modern Warfare introduced in their latest offering last year. Crossplay is the ability to play with players using other platforms but that isn’t something everyone likes. In fact, many people hate using the cross-platform or crossplay feature but why? Well, here’s an auxiliary guide on what crossplay is and how to disable it if you are something you want to go through with it.

How to Fix Packet Loss in Call of Duty Warzone?

What is Crossplay in COD Modern Warfare & Why You Would Disable It?

Crossplay or cross-platform is a feature that enables players to match with players using different technologies, devices, capabilities and of course, skills, in the same match giving an unfair advantage to others.

To explain in layman’s terms, this feature enables users, for say playing the game on PC to pair up with players using Microsoft Xbox or Sony PlayStation consoles. The thing is, players running the game on PC have an upper hand thanks to the use of mouse and keyboard that allows them to combat any situation with higher accuracy and reflex time. On the other hand, playing games on consoles like Xbox One or PlayStation 4 gives a different level of capability that players employ when playing against users playing the game on PC and so on.

Although the feature has both pros and cons, players on Call of Duty Modern Warfare can enable or disable it. They can choose to play with users of different consoles by enabling it or they can disable to play with players using respective systems that are Xbox One, Xbox 360, PlayStation 3 or PlayStation 4 and so on. 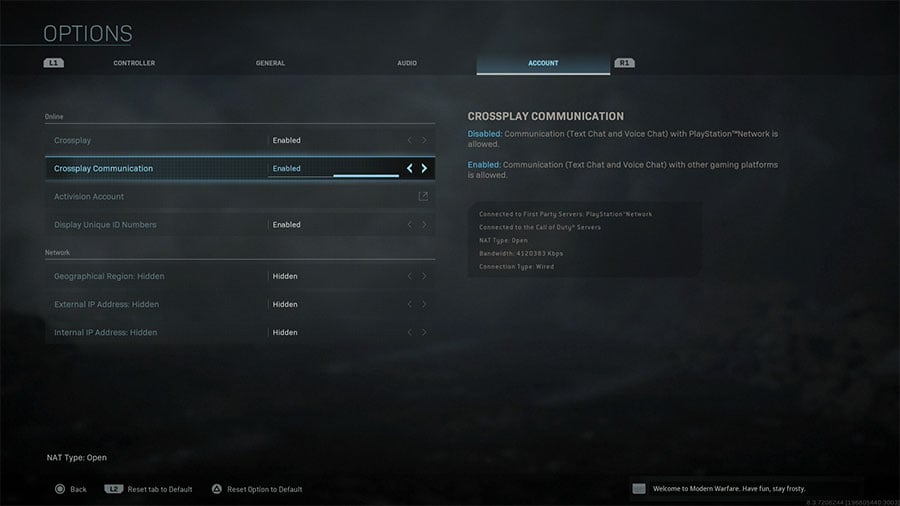 How To Disable Crossplay In Call Of Duty Modern Warfare?

Here’s how you can disable crossplay in Call of Duty Modern Warfare.
Step 01: First of all, open the game on your system (PC, Console, etc)
Step 02: Go to the Main Menu of the game.
Step 03: Next up, tap on the ‘Options’ that you’ll find in the lower left of the main menu.
Step 04: You need to proceed to the Account tab from the menu items.
Step 05: Hover to ‘Crossplay’ and flick the lever/scroller to ‘Disable’ it.

This should conclude that you won’t be matched with any player other than the system you are using.