Although Apple iPhones aren’t best known for their battery life which isn’t that good, however, newer iPhones have started elongating the battery life depending upon how a user is using the device. It is simply that some apps such as games or those that require higher resources tend to consume more juice than the apps that are offline and doesn’t require much of the resources. However, this isn’t the limiting factor since the battery can start depleting quickly than usual due to a number of reasons which is why this troubleshooting guide comes true.

There is a specific battery life of any iPhone XS Max such as a few hours. During the period it is powering the device, the battery drains depending upon the apps and services use. Although the battery will eventually drain out if you are indulging in playing games or streaming HD videos on Wi-Fi, it mustn’t act the same when you are simply using the calculator or calling someone or texting or playing a not that power-hungry game like Super Mario. This is a problem since there are simply unlimited agents that could spike the battery consumption such as the device could be running on a corrupted cache or an updated app or firmware or the there are bugs or viruses into the system causing it to suffer battery that’s draining too quickly among other issues. Therefore, this is a detailed troubleshooting guide on how to manage and lower the effect of battery consumption using several methods. 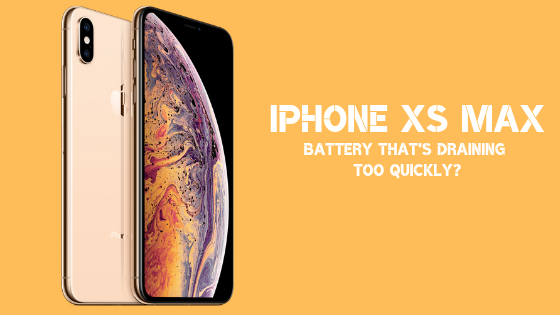 First of all, check if the problem started after a liquid or physical damage. Note that liquid damage is complex and difficult to fix as could need a full replacement depending upon the severity of the issue while those with minor repairable liquid damages can be repaired although losing the water-resistance of your iPhone XS Max for life. On the other hand, fixing physical damage is not that complicated although could land you in a huge bill. Proceed with the many methods that you can employ in order to curb the iPhone XS Max battery draining too quickly issue before reporting it to the professionals.

If you are indulged in too many apps and services at once or if you are using any streaming or high-end graphics game for a long time, restarting the phone resolves these issues. Rebooting the device will actually fix any minor or temporary glitches or bugs while closing all the apps thereby relieving the system by closing all the apps in foreground and background and in turn releasing all the hoarded resources such as storage, memory, processing power, etc. You can restart the phone simply by pressing the power plus any volume button together and slide the ‘Slide to Power Off’ slider and that’s all.

Make sure the charger is well-connected

If your phone’s battery is draining too quickly, it’s not always how it is used but how it is charged. The proprietary charger that you either get with iPhone XS Max or purchase from Apple is made specifically for your device curated with the required input and specifies the output as well. When compared to original, generic chargers offer support to a variety of different phones and thus, can cause problems by undersupplying or oversupplying the required power that can cause complications when the phone is in charge. First of all, you mustn’t use a third-party charged unless there’s any reason and that too not for too long. Next, you must check if the charger is properly plugged into the wall socket (the adapter) and the lightning cable is properly inserted into the lightning port or not since if the connection is lost, the phone might not charge properly.

Try a wireless charger for a change

Do not overuse (full stop)

The focal reason why your phone’s battery is draining too quickly is it is being overused. Ideally, a phone with a fully charged battery can function for a couple of hours without any hassle. However, there are many drivers involved such as what apps you are using, the number of apps and services in use, the number of functions and services you are using, and type of apps such as light-weight or heavy apps like games or live video streaming apps, etc. The thing is simple when there are too many apps involved, the processor works more and thus, takes power from the battery which in turn generates heat.

The heat is dissipated out of the system although some might be trapped thus raising the temperature of the device which raises the risk of an overheating problem. The increase in power consumption is what drives the battery down, however, increase in heat can also drain the battery as well and thus, it is ideal to use the phone smartly rather than consuming its juices all at once. What you should do is to close apps when you are done with it and limit the number of active apps to three or four at maximum. Allow the phone to take a rest for a minute or so when in use and avoid using it under direct sunlight as the sunlight can escalate the core temperature of the device as well.

It is a known fact that outdated apps have adverse impact on the system as it tends to increase the power consumption as well as open a door for hackers to intrude or to inject viruses while lagging behind in terms of new UI changes and features and other refinements and optimizations that are passed through by the app developers. You can either use the manual method to update an app individually or update all the apps at once simply by diving into the App Store. You will see a list of apps that have ‘Update’ button against their listing or tap on the ‘Update All’ on the top right of the screen which goes homogenous with their nomenclature.

Upgrade to the latest available iOS

Updating the firmware goes hand in hand how updating an individual app is crucial. The firmware is basically a medium where all the apps and hardware components interact and allow things to be done which makes it one of the most crucial pieces of code that need an update every now and then. Since you are using iPhone XS Max, Apple tends to keep their phones updated with new patches almost every month or so in order to keep it stacked with latest security protocols and by filtering any bugs or viruses or malware, if found. You can check out if there’s an OS update available or not simply by diving into the Settings >> General >> Updates where you must get all the information you need or visit iTunes to check it out.

This is essentially summoned as the mother-of-all-fixes because it stays true to its name. A factory reset will put the phone to its original factory settings thereby fixing any network or software-related issues right there although hardware issues will need human intervention. Before proceeding further, this method is irreversible unless you know how to retrieve any deleted files. You need to take a backup either by downloading all the stuff in a computer or a flash drive or you can simply upload the data to Dropbox or iCloud that will protect the data while you are putting your phone through a factory reset which won’t take more than a couple of minutes.

The battery could be the first thing you need to verify if it is draining too quickly. Since iPhone users either Lithium-Ion or Lithium-Polymer batteries, these batteries have specific lifecycles where one lifecycle means one charge and one discharge although there are tonnes of discrepancies such as what if the user charges the battery to 50% and discharges it and so on. When the battery reaches the end of life cycles, it depletes and thus, the battery output depletes as well. If you have been using the phone for a while now, it is possible that it is running towards the end of its life cycle thus, the battery begins to produce less output. This will finally end up rendering the battery useless and thus, you would need to change the battery.

If you are still wandering between the various solutions mentioned in this troubleshooting guide and have tried many but failed, it is possible that the issue was induced by a hardware problem at the first place. It could be as simple as battery failure that would need a replacement although it won’t be that cheap since you are using an iPhone XS Max and reporting the problem to an authorized service center will cost you a lot if being realist although I wouldn’t recommend a third-party service center which is cheaper and far more convenient since the battery or any other damaged component could be swapped easily and quickly.