Founded in 2003, Meizu is a consumer electronics brand based in Zhuhai, Guangdong, China. It entered the realm of smartphone manufacturing in 2008 and become the 11th largest phone manufacturer with 20 million units shipped in 2015. It introduced its first-ever phone in 2008 and that was Meizu M8 that attracted huge crowd gathered around Meizu stores to buy it. In 2011, it launched Meizu M9 that was the first smartphone to get Android OS and it was praised for its performance. Fast forward to today, it launched Meizu 16s with the fastest Snapdragon processor i.e. SDM855.

Based on the fact that Android OS was introduced back in 2007, it has been more than a decade now and Google is ready to announce its tenth generation also called as Android 10. Android 10 was released on September 3rd as opposed to its speculated release in August. At the launch, Google confirmed that it will be calling the new OS as Android 10 thereby ditching its decade-old dessert nomenclature.  Google has started its global rollout on all Pixel and Essential Phones simultaneously followed by smartphones signed up under its partnership program which includes one model from brands like Vivo, Oppo, Nokia, Sony, etc that will receive the update soon. 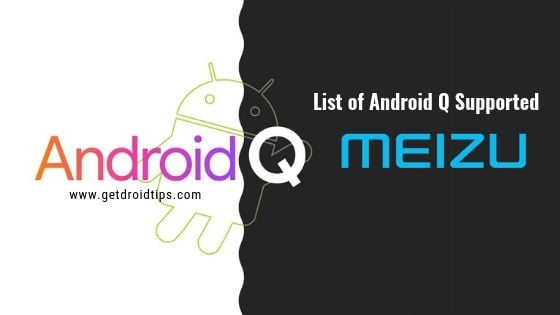 Android 10 will bring a series of functionalities and APIs onboard such as support to the upcoming 5G networks along with flexible and foldable devices. The Android 10 will bring features such as revamped UI, navigational gestures, smart replies within the notification panel, native support to dark mode and more. In fact, Android 10 is one of the most versatile when it comes to privacy and security aspect of a device connected to the internet, thereby preventing users from bugs that hackers could exploit, apps laundering data by obtaining permissions without your knowledge and so on.

Gesture Navigation: No-fuss with on-screen buttons that might eat screen real estate or sometimes, it takes a few attempts to bring those virtual keys on-board to get out of an app or so. With Gesture Navigation, you can use the bottom edge to visit the Home screen while the right edge and the left edge does backward movements followed by a pull from the bottom to the middle to retrieve recent apps.

5G & Foldable Display Ready: The Android 10 comes pre-loaded with support to 5G technology as well as foldable displays that requires free movement when it comes to ever-changing screen sizes when the screen is foldable & when it isn’t.

Sound Amplifier: The feature reduces background noise and other disturbances and enhances the boost thereby allowing users to hear crystal clear sound without any hassle.

Family Link: Add another layer of parental control with Family Link. The feature lets parents track screen time, activities as well as put a limit on the screen time based on how much time you want your kids to spend on their phones in a day rather than clinging to it all day long.

Focus Mode: Apps are distracting at times when you want to focus on something very important. Well, with Android 10 comes Focus Mode that lets the user stop an app or apps temporarily which allows for distraction-free work until the user removes the said app(s) from the list within the Settings app.

Enhanced Privacy Controls: With the new privacy control mechanisms in place, Android 10 will allow users to check out their web and app activities as well as control what is being shared and granted with apps installed. They can choose apps that gain access to any service may it be camera or location or so. Everything is located right within the Settings app for ease.

The Meizu 16Xs comes with 6GB RAM, 64/128GB internal storage option and runs on Snapdragon 675 SoC which is not the same as seen in last year’s Meizu 16X. The phone has a 6.2-inch Super AMOLED display and runs on FlyMe 7.x on top of Android Pie 9.0 that makes it one of the few Meizu smartphones to get Android 10 although sometime next year.
Status: It is likely to get Android 10
Date: To Be Announced

Updated with the latest Snapdragon 855 octa-core chipset, the Meizu 16s brings a 6/8GB RAM and 128/256GB of storage configuration. The device has a high-end 6.22-inch Super AMOLED display with a screen resolution of 1080×2232 pixels. It runs on Android 9.0 Pie based FlyMe 7.3 which means it is likely to get boosted to the upcoming Android 10 10 as well, although the timeline is still unavailable from the Meizu’s end.
Status: It is most likely to get Android 10
Date: To Be Announced

Next is the Meizu Zero which runs on last year’s SDM845 SoC along with 4/6+64/128GB configuration. Since the device runs on the latest Android Pie 9.0, it is highly probable that the device will be boosted to the upcoming Android 10 Q launched on September 3rd and the rollout via OTA for Meizu can be expected to start in early 2020.
Status: It is likely to get Android 10
Date: To Be Announced

Finally, we have Meizu Note 9 onboard along with Snapdragon 675 eight-core chipset along with 6GB RAM and 64/128GB of internal storage. Since it runs on Android Pie 9.0 with the skin of Meizu’s in-house FlyMe 7.2 OS, it will be pumped to the next-gen Android 10 that will be released sometime next year but we will have to wait for the official list of Android 10 supported Meizu devices.
Status: It is likely to get Android 10
Date: To Be Announced

Note that this is the list of Meizu smartphones that were released last year. Although I have mentioned the probability of getting Android based on certain specifications, release date, and the OS, there could be exceptions and exemptions and bare with it.

There are many explanations behind why your phone is not eligible for Android 10. If you have gone through the above mentioned list of Android 10 supported Meizu devices which is although a tentative list, you will get an idea which devices are supported, likely to get the update and those which won’t get it. If your phone is listed under ‘not eligible’ list, here’s why it could be.

First of all, your device must have released not more than two years from September 2019. Note that this doesn’t mean all the phones released during this period will be supported since only a handful of devices surpass the filter which has slits like release date, specification & configuration, etc.

Note that your OEM is mainly responsible for the rollout of Android updates since it takes the code from Google, customizes it according to its requirements which really changes keeping different models in mind. Smartphones launched this year will get the update first with flagship phones getting a higher priority. Then we have Android One program which guarantees updates for two years where the Android updates are faster than others. These are just a few reasons why your phone might not be eligible for further updates.

Unless your phone is a flagship device with emphasis to its release date sometime this year or at least last year, there are only a handful of devices that are eligible for upcoming upgrades to Android 10 and so on. If you have an Android One device, you may not worry because you will surely get at least two upgrades for sure but if not, the question arises is what you could do if your phone doesn’t support Android updates?

The answer is simple. You can always upgrade to a newer phone which is efficient and economical for devices leased by any carrier or if you have a buyback option with your brand or any telecom carrier. If that’s not an option, you can try to check for updates via OTA. If not, try forcing an update on your device which might or might not require the device to be rooted. Next thing you can do is to install a custom ROM on your device. Since there are just too many custom ROM developers available at your disposal, you can try between LineageOS, Havoc OS, Paranoid Android, Pixel Experience, and others but check out if your device is supported or not.