We all know how brilliant is Google’s camera on the Pixel devices is and the mods for all other Android smartphones. Not only the image quality but, the processing capabilities of the device is also put to the test. Moreover, the device capabilities are far more superior as compared to what the stock camera app delivers. But, that is a topic of another discussion. According to some reports, Google is now planning to bring its great Night Sight Mode feature to the main UI of the Google Camera.

Earlier, the Night Sight Mode was under the More option of the Google Camera and it was buried there. you had to fiddle around the last set of option and then get to the Night Sight Mode. But, according to 9to5Google, The company is planning to bring it to the front, with the new Android Q beta version. Moreover, the Android Q is also expected to bring the updated gesture navigation system to the Android Q based devices. 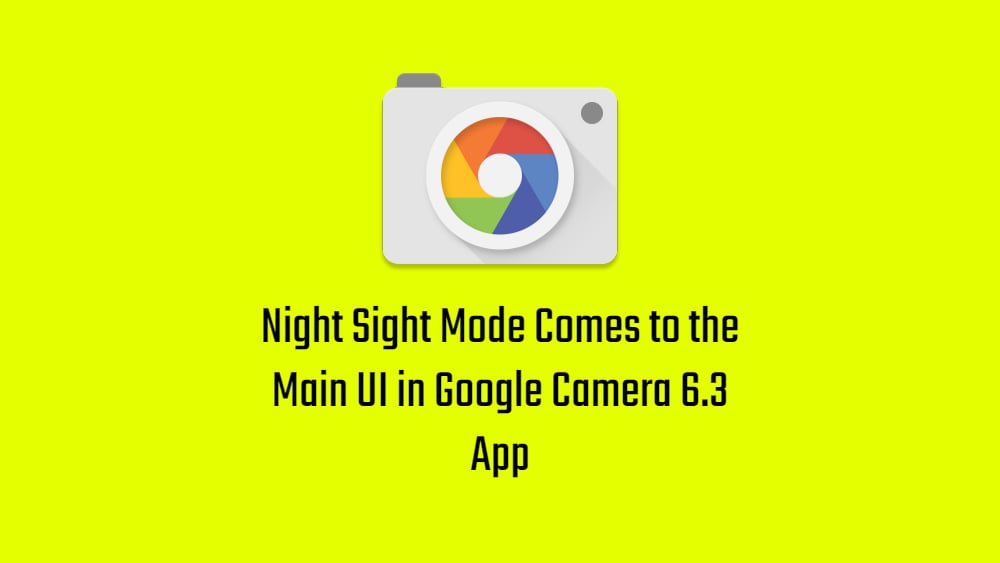 The Night Sight Feature with this implementation will be brought to the main feature list of the Google camera. This will make this brilliant and handy feature more accessible to the users. The Night Sight Mode will now rest beside the Portrait mode option on the Google camera. However, it will still prompt you to switch to the Night Mode once you are in a dark environment or low lighting conditions. The notification will be in the form of a “Blue Pill Shaped indicator” to make the new location of the Night Sight mode, more apparent to the users.

Meanwhile, there will be the “Flash” option for selfies, which will brighten the interface to emulate a soft flashlight, which will be now called “Illuminate”. You can check the below image for reference;

Never miss a moment with Google Camera, and take fantastic pictures using features such as Portrait and Night Sight.

You can download the Google Camera 6.3 by clicking the button below for your Pixel Devices running on Android 9 Pie as well;

What is Night Sight Feature?

With the Night Sight feature, you can take great quality images in dark or low lighting conditions. You will see a great amount of difference between your stock camera app and the GCam port app if you are using an Android device other than that of Google’s Pixel devices. The Night Sight Feature is just like the night mode we used to have on our mobile phone long back. This lets the light to enter for more time and in turn, produces great quality night images. However, you need to be stable while taking the images with Night Sight feature enabled. The Google Camera application on the Pixel devices is the highest rated and the best camera you can have on your smartphone till date.

Many smartphone manufacturers have tried to beat this by using a triple or even four camera setups but, there is still no one to beat the amazing camera processing quality from the single lens of the Google Pixel devices. Moreover, Google will keep on enhancing this camera and image processing quality with their future version of Pixel phones and will keep blowing our minds with the image quality it can deliver.

However, the recent leaks about the Pixel 4 devices show that the company is going to ditch the single camera lens set-up and will be coming up with a triple camera set-up which will be quite interesting for the fact that if Google can create such brilliant images with just a single lens, think of the wonders it would do with multiple lenses. But for now, we will have to wait and watch for that development to happen.