The best thing about the new Nokia smartphones now is regular updates, thanks to the HMD Global. The company already rolled out the stable Android Pie update for the Nokia 7 Plus and Nokia 6.1 Plus received a beta version of the Android 9.0 Pie firmware update last week. The company promised that the Nokia 8 Sirocco will get Android 9.0Pie update next month. Now the info surfaced about Android Pie update for Nokia 5.1 Plus smartphone. 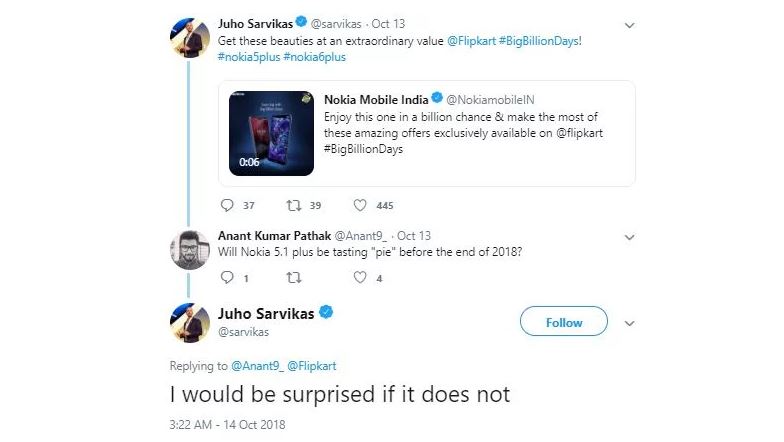 On Twitter, someone asked to Juho Sarvikas, Chief Product Officer at HMD, the Nokia 5.1 Plus will get the Android Pie update before the end of 2018. Juho replies he “would be surprised if it does not”. The Android 9.0 Pie update will bring new features to the phone, including Do Not Disturb Mode, Digital Wellbeing; as well as Adaptive Brightness and Adaptive Battery to get more mileage of the battery. The update will also come with AI predictions of apps and services and new system navigation.

The Nokia 5.1 Plus smartphone comes with glass panels on the front and rear along with a plastic frame. It features 5.8-inch IPS display that supports 720 x 1520 pixels of resolution and offers 19:9 aspect ratio. It powered by Octa Core MediaTek MT6771 Helio P60 (12 nm) processor under the hood along with Mali-G72 MP3 GPU for better graphics experience. It comes under the Android One programme which means runs on the Android stock version.

The company launched two RAM and memory variants, one comes with 3 GB of RAM 32 GB internal storage and other has 4 GB of RAM and 64 GB internal storage option. It supports micro SD card up to 256 GB.  The 5.1 Plus featured with dual camera sensors on the back side along with LED flash, HDR and panorama features. There are 13-megapixel main camera sensor with f/2.0 aperture and a 5-megapixel secondary camera. On the front side, the 5.1 Plus phone has an 8-megapixel camera with a f/2.2 aperture for selfies and video calls.

It packed with Non-removable Li-Ion 3060 mAh battery inside the body. There is a fingerprint scanner on the back side of the phone. The phone is available in Night black, Glacier white, Baltic sea blue color options.