A South Korean smartphone company, Samsung all set to unveils a new member of the Galaxy A series, called Samsung Galaxy A9 2018 smartphone. The company holding an event at today for the phone announcement. The Galaxy A9 will be the first smartphone in the world that offers four cameras on the rear panel. There are speculations that the phone also known as Galaxy A9s in some markets. Before the official announcement, the official back panel Galaxy A9 2018 image leaked online and confirmed that the phone will have Quad camera sensors setup on the back side. 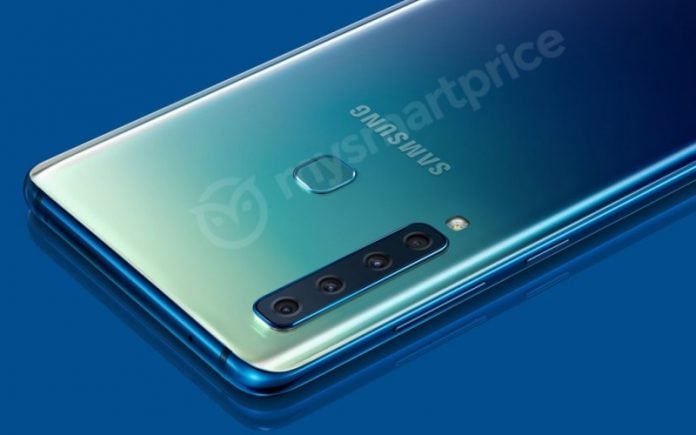 According to the shared image of Samsung Galaxy A9, the will have glass rear panel along with the aluminum frame. There is a volume rocker key and a Bixby button will present on one side of the phone. At the top left of the rear panel, there 4 cameras placed along with LED flash below the camera. There is a fingerprint scanner also available and Samsung brand logo below the scanner.

In terms of 0ther specs, the Samsung Galaxy A9 2018 will feature 6.3-inch Super AMOLED Infinity display that will support 1080 x 2220 pixels of resolution and offer 18.5:9 aspect ratio. Recently, the Galaxy A9 2018 smartphone appeared on GeekBench with Samsung SM-A9200 model number and reveals some specs of it. The phone runs on Android 8.0 Oreo operating system which is lit bit surprising. It powered by Octa-Core CPU under the board which clocks at 1.8 GHz along with Qualcomm Snapdragon 660 chipset. The phone will have 6 GB of RAM on board and 64 GB internal storage capacity. On the front side, the phone expected to come with a 24-megapixel camera for selfies and video calls.