The updates seem to be rolling off for the Sony Smartphones. Previously we have covered that the Xperia XZ3 and Xperia XZ2 family (XZ2, XZ2 Compact, and XZ2 Premium) are getting new security patch update. And now, it is the company’s latest flagship, Xperia1 has started receiving its first and maiden firmware update. This update moves the build number from 55.0.A.2.205 to version 55.0.A.2.278, which in other words means you will be updated from the April 2019 Security patch to June 2019 Security patch.

It is very strange that Sony hasn’t released any official changelog for this update while we can see every other manufacturer providing a changelog that allows us to know more in detail about what changes the new update brings to the smartphone. Moreover, this new firmware update is live for both the Single SIM as well as the Dual SIM variants of the device. The size of the download is 325 MB. 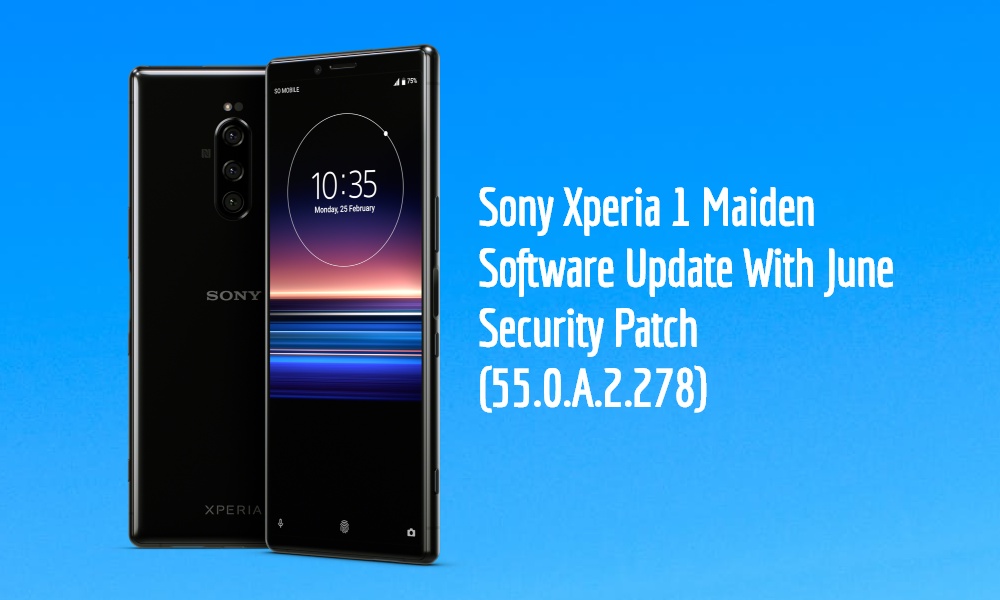 Details About the Update

Here are the details of the firmware which brings the June Security Patch for Xperia 1 smartphone which happens to be the company’s latest flagship;

You can check out the images for the update below;

This update is officially rolled out by the company so, you will receive the update over the air. But, this update will come to different regions at different times so, don’t worry if you have not received any update notifications yet. To check whether any download is available or not, follow the below steps;

The Xperia 1 is the newest flagship from the Sony Mobile Corporation. It is packed with some advanced and one-of-a-kind features that are packed only in this smartphone in the world. Moreover, it is this device through which the company is expecting to mend its sinking ship. The Xperia 1 sports World’s First 21:9 aspect ratio which the company is calling the CinemaWide aspect with the 4K resolution with HDR OLED display. Obviously, all the content cannot be viewed in the 4K resolution and for non-4K content, it uses the adaptive display. The color accuracy is top notch and is touted to be the same as the Hollywood Studio productions. Moreover, according to the official Sony website, it says that you can experience unprecedented color accuracy with our new Creator mode to bring content to life exactly as it was envisioned.

Under the hood, the Xperia 1 packs the Qualcomm Snapdragon 855 chipset with 6GB of RAM. It has 128GB of UFS internal memory which can be expandable up to 512GB. This device is running on the latest Android 9 Pie and packs a 3330 mAh battery which in my opinion, is below par for such battery consuming featured phone. Moreover, you also get the IP65/68 water-resistant protection and also the Corning Gorilla Glass 6 for the display. you get metallic edges around the device with glass at the front and the back which gives it a definitive appeal and premium look.

Besides, the display is 6.5-inch HDR OLED with a resolution 1644×3840. It has a Creator mode “powered by CineAlta” – Inspired by Master which allows you to create breathtaking videos. On the camera department, it sports a triple camera set up at the rear with 12MP + 12MP + 12MP shooters. All differ in terms of their aperture and has a normal camera, a wide-angle camera with a 130-degree field of view which is more than the previous best in the market. the Samsung Galaxy s10+ which has a 127-degree field of view for the wide-angle camera. and a telephoto camera for awesome portrait shots. Moreover, in the front, the camera has an 8MP shooter with an f/2.0 aperture.