How to Use Anti static wrist strap while building pc, An anti-static strap is actually an anti-static bracelet or strap that has a ground wire and a clip attached to the end of the cable. Antistatic wristbands are used to ground the equipment while working on the internal components. The bracelet is used so that static electricity cannot be transferred from you to the computer. There are other anti-static elements that are used, as well as an antistatic mat and antistatic plastic bags. All these items can be purchased at computer stores.

It is highly recommended for you to use an Anti-Static Wrist Strap while building a PC, but it’s also necessary to know all its precautions and dangers before using it, In this post, we will explain you on How to Use Anti static wrist strap while building pc, Why to Use it, and Why is it Necessary.

Why should a computer technician use an anti-static wrist strap?

An antistatic wrist strap is made of a thin strip of material that contains a small piece of conductive metal that touches your skin. The metal is connected with a long, curly wire that contains an electrical connection wire to ground. The cable ends in a small metal clip, which is attached to another piece of metal to ground you and dissipate static electricity that may have accumulated. Computer technicians use these important accessories to avoid introducing possible electrical shocks to the computer while working on it. Any electric shock, even an apparently small one of a static charge, can kill a component of the computer.

Static electricity, also known as electrostatic electricity, occurs naturally when two objects touch each other. In the process of moving apart, the elements can rub together, exchanging electrons. During this exchange, both objects to be electrically charged – one positive, one negative. Whenever you touch something with a neutral wire or in front of the charge, transfer the electrons, causing a small electric shock.

A static charge usually ranges from 2000 to more than 12,000 volts, and while this figure seems high, it does not really pose any real threat to your health. However, the delicate electronics and circuits inside the computer could suffer damage and even complete death with loads as low as only 200 volts. A sudden death component is easy to detect, but a component that has suffered static damage cannot completely fail until days or months later.

Certain factors increase the likelihood of creating and building a static electric charge, which could mean death for your team. Simply walking on a carpeted floor can generate a load, as demonstrated by the sudden shock it received when touching the doorknob. Winter is especially the first for static discharges, thanks to its dry air and low humidity. Static electricity is built all year round, but the warmer, wetter and wetter months help to dissipate the electrons before reaching a high enough level for jarring, surprising discharge.

– How to avoid static electricity

While it is virtually impossible to completely avoid static electricity, there are ways to minimize the possibility of a computer-killing crash. Grounding by touching the metal casing of the computer tower before touching any of the electronic components within its walls. An antistatic wrist strap helps keep you grounded by constantly moving any static to the metal that is hooked to it. When working on your computer in dry and cold conditions, such as during the winter, run a humidifier in the room before opening the case to raise the humidity and lower the possibility of static up.

Computer components are sealed in antistatic bags when sold and should be left inside these bags until you are ready to install them. This will minimize the chance of a static download damaging them while waiting for installation. Handle all expansion cards and circuit boards by the edges and do not touch any solder spots, transistors or chips. Make sure all connector points are clean before inserting them into the correct slot and making sure they fit properly. 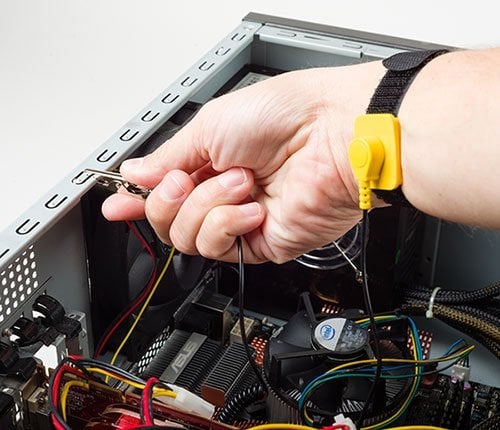 How to Use Anti static wrist strap while building pc

We hope our guide on “How to Use Anti static wrist strap while building pc” Helped you, Stay tuned with us at GetDroidTips to be updated with the latest technology News and Review.