A couple of weeks ago, there were speculations that the Chinese smartphone manufacturer will launch Xiaomi Mi Mix 3 on October 15. Now the company released a teaser on official Weibo handle and revealed the launching date of its upcoming Mi Mix 3 flagship smartphone. The company confirmed that it holding a product launch event for Xiaomi Mi Mix 3 smartphone on October 25 at Beijing. According to the teaser, it looks like the Mi Mix 3 comes with a sliding camera mechanism. 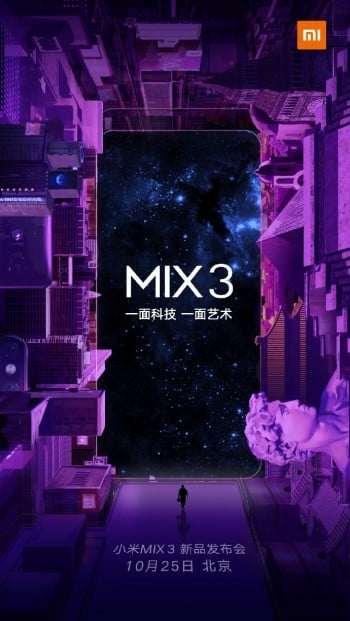 Previously, the Xiaomi Mi Mix 3 flagship smartphone teased with Oppo’s Find X notch that comes up. But the latest teaser suggested that it may offer 100% screen to body front along with a sliding back panel.

Recently, the company’s Global Spokesperson and Director of Product Management, Donovon Sung shared two pictures of Mi Mix 3. One of the pictures shows us that the Xiaomi Mi Mix 3 will come in four color options. The Mi Mix 3 will come with a new futuristic design.

Xiaomi Mi Mix 3 phone will come with a 6.4-inch AMOLED display that offering almost 100% screen to body ratio. The phone will have in display fingerprint scanner instead on the back panel. The Mi Mix 3 expected to power by Octa-core Qualcomm Snapdragon 845 chipset under the hood. According to the leaks and rumors, the Xiaomi Mi Mix 3 will available in two RA and memory variants. One of them will come with 6 GB of RAM 64 GB internal storage option and other will have 8 GB of RAM and 128 GB internal storage option.

Just like the other smartphones, the Mi Mix 3 will also be featured with dual camera sensors on the back side, 16-megapixel main camera and 13-megapixel secondary telephoto camera sensor. On the front side, it will have a 20-megapixel camera along with some AI features. The phone will also support 3D facial recognition feature. It will come with pre-installed Android 8.1 Oreo operating system out of the box along with latest MIUI UI running on top. The phone will support 18W fast charging feature.