Commands are a set of instructions given to the computer to perform specific tasks. We can issue commands via a command-line interface, as input to a network service as part of a network protocol, or as an event in a graphical user interface. While there are a variety of commands we can make the computer work with, today we’ll talk about one of the many commands prompts that we’ll use on a Command Line Interface capable of reading or making changes to your computer’s Operating System.

Chkdsk, or the Check Disk command, is a system tool and command that verifies the specific files or disks of your system as a whole. It verifies if the files are corrupted, even change and fix errors with further commands. You can access and perform this command from the Command Line Interface, which functions only with the use of keyboard and through the Graphical User Interface (GUI) that functions with a mouse, on-screen buttons, etc. Before we divert much from the topic, we’ll look more into the Chkdsk command. 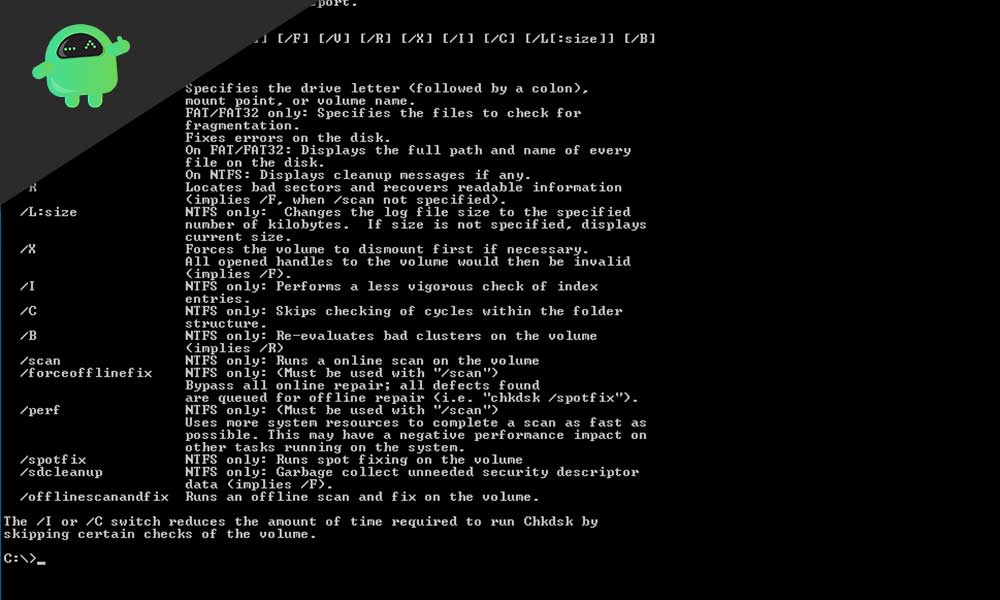 When you open the Command Prompt Interface, a line of directory C:\WINDOWS\system32> will be written there as default. You must not make any changes to it but to perform the command, the items should be added after it.

All you have to do is specify which disk you want to perform your command on and copy from the above table the command option that you desire to perform on disks.

How to Perform the Chkdsk Command

This is the easiest way to initiate the Chkdsk command on your computer. To do so, just go to My Computer or This PC (As shown in your computer) and right-click on the disk that you want to use the command on. Choose the disk→Right-click→Properties→Tools→Error Checking→Check and follow the on-screen instructions. This will initiate the process and will take a few minutes to complete. Depending on which option you selected, the Chkdsk command will find errors, fix errors or recover data with the possibility of losing.

Using the Command Line Interface to performs commands eliminates the interference of any external devices like a mouse or on-screen interactive buttons. This functions solely to the commands of your keyboard, be it to move around the typing curser or performing the command. To do this, go to the Windows search(Search bar in the start menu for Windows versions except Windows 8). On the search bar, type in CMD. This will show you the Command Prompt app. Right-click on the Command Prompt app and run it as administrator. Follow the on-screen instructions and it’ll finally launch the app where you can perform the commands.

The entire Command Prompt comprises over 280 commands. From the digital perspective, that is indeed a huge amount. In contrast, the Chkdsk command is the most common and mostly used Command Prompt command, regularly in use to check/fix drive issues in computers. These commands are directly for the Operating System that does altering within the OS to eliminate any risks of drives. However, the Chkdsk command can be performed directly through the Graphical User Interface(GUI) but there are other options of the same and commands that solely depend on the Command Line Interface.