Smartphone manufacturers release new firmware more frequently than releasing new smartphones. Sont being a reputed smartphone manufacturer do this to keep their users from experience better things every time. But as a user finding every new firmware and installing them is a hard task. Many users might not even be aware of a new release, and end up not getting the new experience added to their device. Many fake sites are also there offering fake firmware which might increase the chances of security vulnerabilities on your device. The XperiFirm Tool is something which comes with the perfect solution for all of these issues.

The XperiFirm Tool is something which can help you download all new firmware which is officially released by Sony. This is made possible by connecting to the official Sony servers. This amazing tool is developed by a senior member of XDA, IgorEisberg. Read through to find out more details about the XperiFirm Tool and the link to download the latest version of the tool. 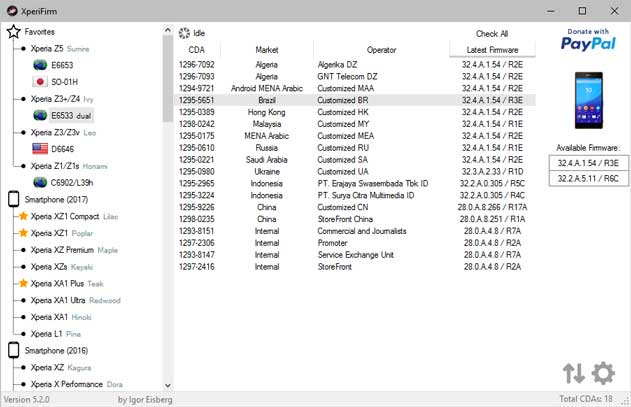 Well, there is a number of brands that are selling smartphones across the globe. All have their own set of features and are always in a race to leave behind the other brand. One of the most important after-sales service that the Android OEMs can provide to its users is the regular and timely rollout of the updates. We always come across news of a smartphone getting a new update. These updates are pretty essential to keep the devices up and running with the latest trends and safety measures to keep the data of the users safe and also provide them with the latest Android experience. However, there are certain times, when the update is rolled out for a region, it reaches a certain set of people, but the other set of people are devoid of it. It is a fact that OEMs roll out official updates in a staggered manner meaning that not all the devices will get the updates at the same time.

But, there are numerous tools available for each OEM that helps you to pick up the update package file for manual degradation which means that you do not have to wait for the official OTA to arrive. Such a tool for Sony Xperia smartphones is the XperiFirm tool. You can make use of the XperiFirm Tool to download the latest stock firmware for any Sony Xperia phone and upgrade your device right away even if the OTA is not yet available for your region. There are two panels in the layout of this tool, once that depicts the smartphone names and the other depicts the updates. You can check if a new update is available for your region and then click on it to download the latest firmware for your Xperia phone pretty easily and safely.

The XperiFirm Tool is packed with features which helps Sony users to seamlessly get access to all new stock firmware released officially by Sony. The main features of the tool include:

[su_note note_color=”#fff2fc” text_color=”#000000″]To Install on Window PC, .net Framework is a must needed software. So download the below given .NET Framework for your Windows version.

For Linux PC: (Officially Not Supported)

For Mac OS: (Officially Not Supported)

I hope this guide was useful to download firmware from XperiFirm Tool. If you have any queries or feedback, please leave a comment below.

An admirer of nature, movies, bikes, and rock music. Beatles pleases him on a pleasant day. Pink Floyd let him sleep in peace.