When smartphones were initially released, there was a large number of buttons, and even some brands introduced smartphones with physical QWERTY keyboards. But as trends and technology getting advanced, the need for simplicity in design and function has emerged. As part of the advancements in designs, physical keyboards are disappeared, and large screens replaced them. The only keys you can find in most of the devices are the Power on key, volume key & home button (in most smartphones) The most important one among them is considered to be the Power on button. If you have faced a Ulefone Power Button problem which may sometimes stop working due to a hardware issue, then here will guide you on how to use the power button function very quickly. 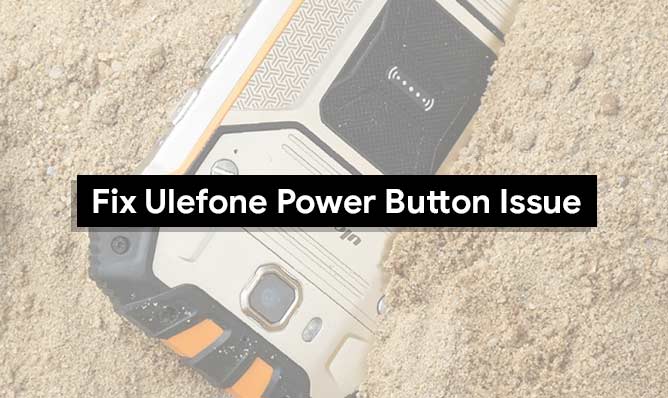 Ulefone is a smartphone brand with cutting-edge technology and brand name. The phone undergoes rigorous testing before it is released in the market. But in rare conditions, the button can malfunction.

The cliche and commonly used operation for fixing this issue are the obvious restarting of the smartphone. If the phone’s screen is in off condition by connecting a USB charger or asking a Friend for a call to the mobile can switch on display.
If the phone is already in an OFF condition, and USB debugging is previously enabled then connecting the phone to a Windows PC can restart your phone. Here are some other fixes for the Ulefone power button not working problem.
There are hardware as well as software fixes discussed in this section

Use software alternatives to fix the issue. It is an effective method to tackle the problem when you cannot afford to technically replacing the power button. So to perform this first go to Google play store and search for apps that help you restore the function of the power button. Some of the options are the following.

Gravity screen is an impressive application that you can download in the play store. By installing this app, the phone becomes “extra smart.” Whenever the phone is kept in the pocket or table, the screen is turned OFF, and if the phone is taken out from the pocket, then the display is automatically switched ON. This app makes use of the proximity sensors embedded in the smartphone.

Knock-on is a super-efficient application for this sole purpose. By just knocking on the screen becomes active. This is done by making use of the capacitive touchscreen technology. But in some rare cases, some smartphones do not support this application. Check whether your model works appropriately with this application before you install it.

The hardware or mechanical fix for the power button issue is the apparent replacement of the switch. It is best to consult an authenticated customer support professional.

Hope all these solutions will help to Fix Ulefone Power Button Not Working Problem faced by all users. If you have any queries, feel free to ask via comment or contact us page.