In this article, we shall be comparing spots from the Forza Horizon 5 game vs the spots in real life as well. This article could very well serve as a tour guide for fans that will be visiting Mexico since they have a passion for the game and traveling.

The festival location for Forza Horizon 5 is none other than the beautiful country of Mexico. Mexico has a beautiful environment with its vast deserts, sunny weather that is just perfect for a sun bath at the coast, long and wide highways, great livelihood, and whatnot.

Forza Horizon 5’s environment setup has exactly replicated some of the places from the actual country itself, the places look identical or even more so very accurate and beautiful, which is very breathtaking indeed.

Since Forza Horizon 5 locations are inspired by real life, this article will be fun and a revamp of all the popular locations verses their real-life counterparts. Its fun and exciting that many of these places were replaced very accurately and beautifully in the game. 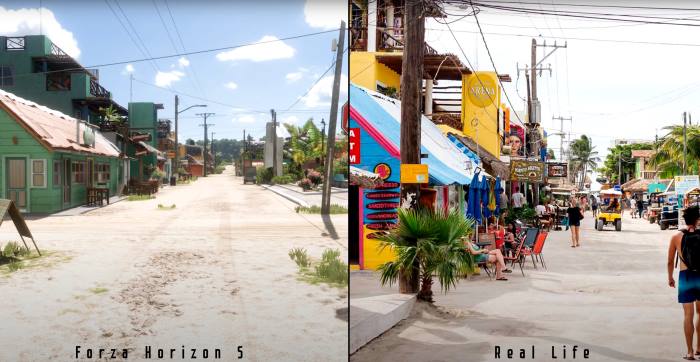 Playa Azul or also known as Isla Holbox is a small Island that is situated north of Mexico’s Yucatán Peninsula. This Island is part of the Yum Balam Nature Reserve and is separated from the mainland by the Yalahau Lagoon.

This place is a huge home for birds such as Flamingos and Pelicans. This Island when compared to the one present in Forza Horizon 5, almost looks very identical and beautiful. It is a very soothing place that is famous for its tourist attraction. 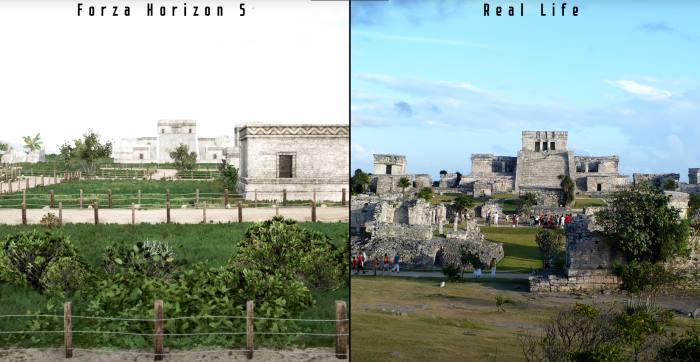 Tulum is a very famous town that is well known to attract tourists due to its Archaeological Zone. It is situated on Mexico’s Caribbean coast which is almost 130 kilometers away from Cancún. These ruins can also be found on Forza Horizon 5’s map and just look as beautiful as the ones present on Earth. 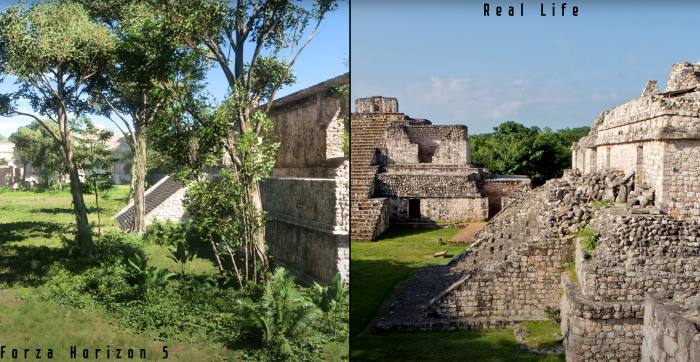 Ek Balam is a Yucatec-Maya Archaeological Zone. It lies within the Northern Maya lowlands in Mexico, which is situated 25 kilometers north of Valladolid and 56 kilometers northeast of Chichen Itza. This location is considered the seat of a Maya kingdom.

In Forza Horizon 5, this location looks absolutely stunning just like the actual location, it is a blast to drive around this location in a Baja truck or an SUV. 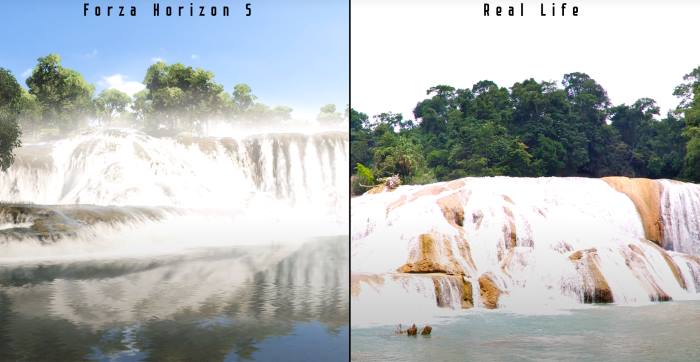 The Cascadas de Agua Azul are waterfalls that are present on the Xanil River located in the Southern Mexican state of Chiapas, 69 kilometers away from Palenque which is near the Mexican Federal Highway 199, these falls can be seen by players.

These falls look very beautiful in the game and are a nice place to take some shots of your Mercedes AMG One. 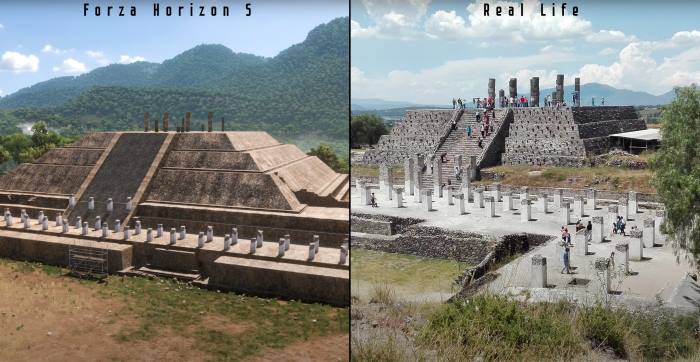 Yet another Archaeological Zone that is present in the game. This place is a Mesoamerican site which was an important regional center that was marked as the capital of the Toltec Empire.

These small beautiful statues can also be seen in the game while exploring the map. It is not as accurate as the ones in real life but is close somewhat. 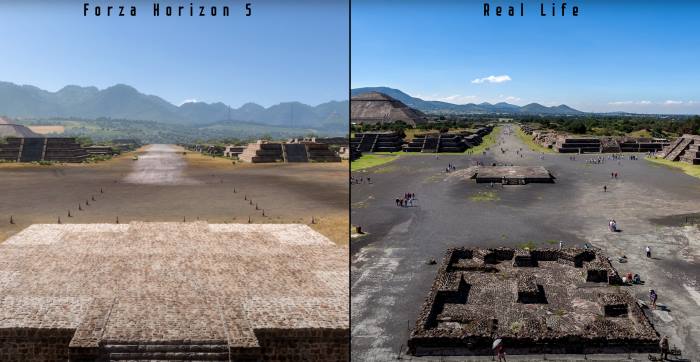 This location has been depicted accurately in the game and is a perfect spot for taking pictures of the lighting-fast, Koenigsegg Jesko. 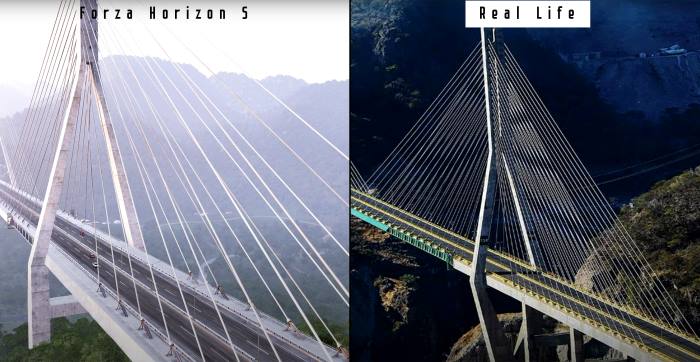 The Gran Puente also known as the Puente Baluarte is a cable-stayed bridge in Mexico. It is located between Concordia in Sinaloa and Pueblo Nuevo in Durango. This spot in the game is the perfect spot to speed up your Lamborghini Sesto Elemento. 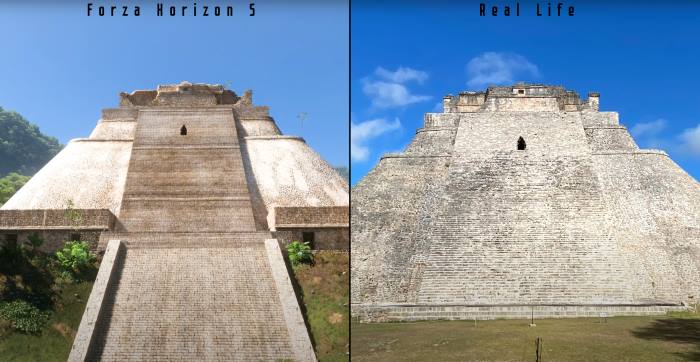 This location is an ancient city from the classical period which is located in Mexico. This location is considered as one of the more important Archaeological sites of Maya culture, Palenque culture, and Chichen Itza culture. This place looks gorgeous in this game and is a great location to drive around with friends in a party. 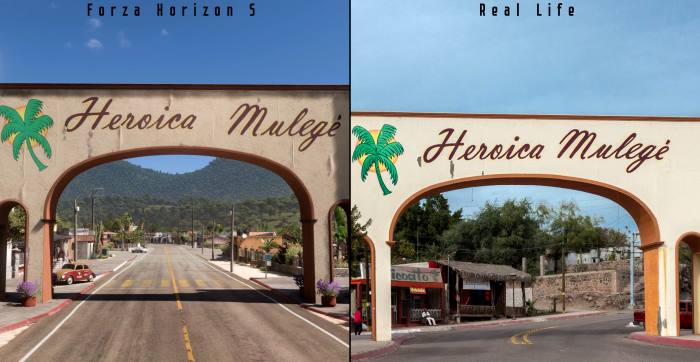 Mulegé is a city in Mexico, Baja California Sur, which is situated in the Gulf of California. It is a very small city with a population of roughly about 4,000 people. The small city has a cheerful livelihood which can be seen in the game when driving around, it also has some beautiful paintings on some of the walls of houses, a perfect location to take pictures of your JDM rides. 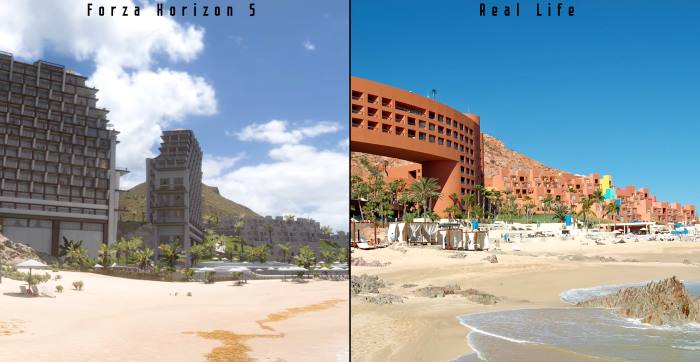 A beautiful resort that can be found in the real life as well as in the game. It is located on the East coast of Mexico and has a great view from the resort’s balconies. It is a very soothing place to drive around and players are also able to collect some fast travel and XP boards around this region. This place is depicted very close to real life in the game. 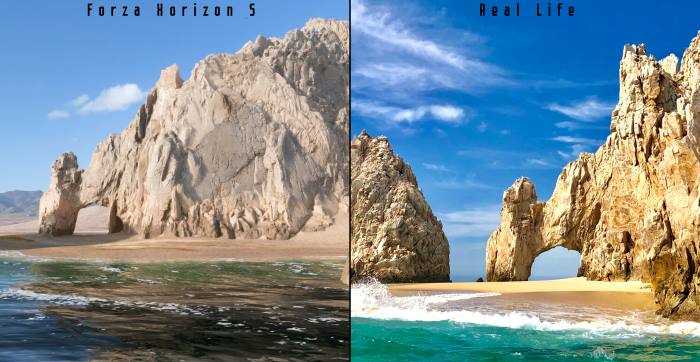 This famous arch of Cabo San Lucas is a rock formation that is at the Southern tip of Cabo San Lucas. It is located at the southern end of Mexico’s Baja California Peninsula. It is also locally known as El Arco. This location looks much more beautiful and vibrant than real life and is a great place for a race against friends in Baja trucks. 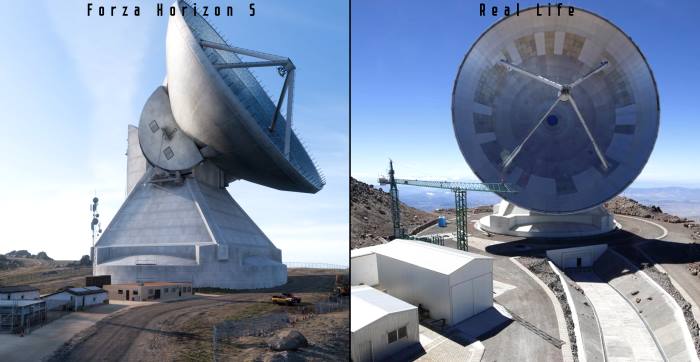 The Large Millimeter Telescope is located at Volcán Sierra Negra, Puebla in Mexico. It is a telescope that was built for observing radio waves in wavelengths from 0.85mm to 4mm. This location is great for completing trials downhill as it is situated on the top of a red mountain. 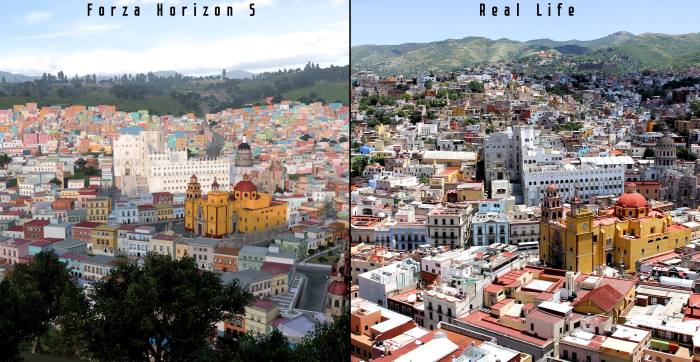 Guanajuato is a city located in central Mexico, it is well known for its silver mining and colonial architecture which was developed way back in the day. The city has a network of narrow streets and tunnels that go underground.

The city is beautiful looking in-game with Forza Horizon 5’s festive activities mainly taking place in the city, the location is also great for street racing, so take your Supra GR out for a ride and some pictures. 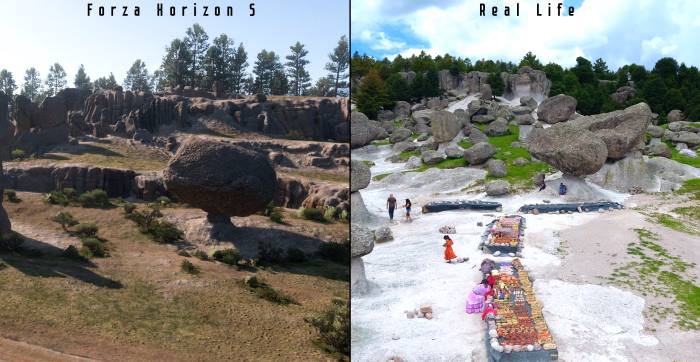 This location is a part of the Copper Canyon that is present in Mexico. It attracts a great number of tourists every year and is a great-looking spot in the game. Unfortunately, there is not much information available on this location. This place also serves as a great location to take pictures of your car and is presented beautifully in the game.

This brings us to the end of this Forza Horizon 5 vs real life, all points of Interest based on game map list. It is truly fascinating that game developers have put an ample amount of time into research for these locations. I hope that you list the list, do let us know if we missed some locations in the comment box below.