ZTE Axon 7 (codename: axon7) launched in May 2016. The phone came out of the box with Android 6.0.1 Marshmallow and later upgrade to Android 7.1.1 Nougat. Do you want to Install any Custom ROM for ZTE Axon 7 device? then you are at the right place. Here we will list all the Custom ROM for ZTE Axon 7. If you have a ZTE Axon 7 device, then you may be knowing that this device runs on Android OS. Well, the biggest advantage of Android is that it is an open-source project. This allows every community to develop and Customize ROM for their phone.

Talking about the specifications, ZTE Axon 7 features a 5.5-inches display with a screen resolution of 1440 x 2560 pixels. It is powered by a Qualcomm MSM8996 Snapdragon 820 processor coupled with 4GB of RAM. The phone packs 64GB of internal memory. The camera on the ZTE Axon 7 comes with a 20MP and 8MP front shooting camera. It is backed by a Non-removable Li-Ion 3250 mAh battery with Fast battery charging (Quick Charge 3.0). It also has a Fingerprint sensor on the back. In this guide, we will show you which are the best custom ROM for ZTE Axon 7 available now. 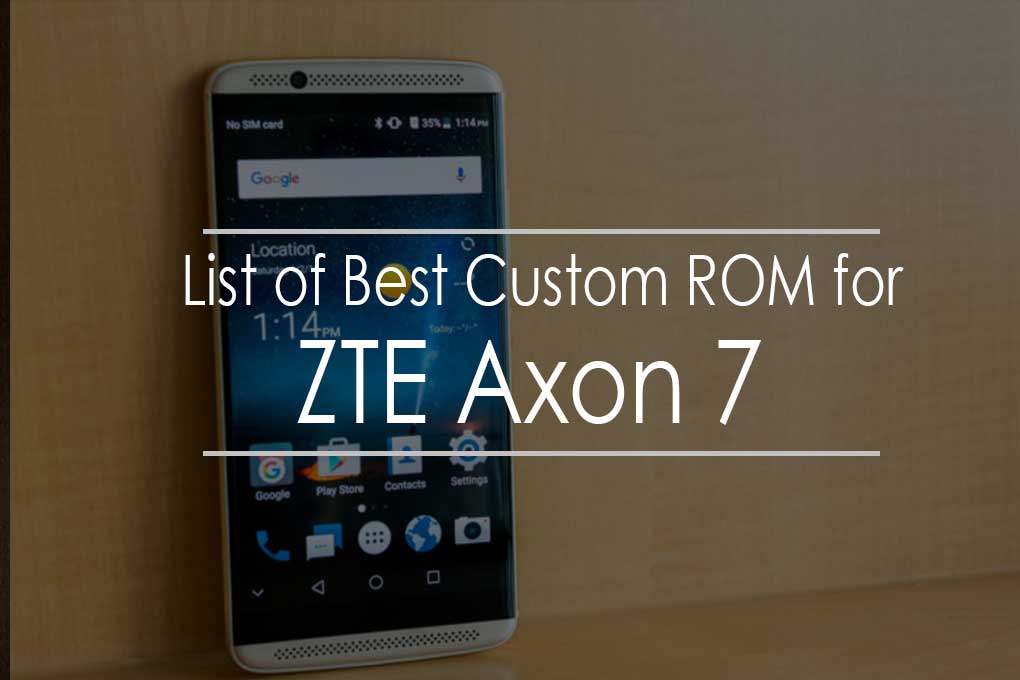 If you have TWRP, then you can simply flash one of the best custom ROM for ZTE Axon 7 here. As we said, there are many custom ROM out there to choose from. Not every Custom ROMs are mean to be stable to use as a daily driver. You can read the description and the features that come with the custom ROM given below for ZTE Axon 7 devices.

You can follow the link to Install Lineage OS for ZTE Axon 7 device.

dotOS is a simple abbreviation of the term Droid On Time Operating System. The main developer behind the dotOS community and team members are: Ganesh Varma and Kuber Sharma. The ROM brings many new tweaks and features and also merged some features from Best Custom ROM.

As the name suggests, ROM brings the real Google Pixel experience on ZTE Axon 7. It has all the features and applications which comes out of the box with Google Pixel smartphone. Now you can experience the real Pixel Smartphone with this ROM.

Carbon ROM is an android open source project who develop customized version of Roms. They are known for fast and fluid performance and bloat free Roms.They strive to not only provide you with the best ROM they can build but also to give back to the Android community and our fellow developers.

CyanogenMod 13 is based on Android 6.0 Marshmallow. It is one of the best featured Android Custom ROM Available for most of the Android Smartphone. CM13 is built by the community of developer. it is a free and open source software based on the official releases of Android by Google, with added original and third-party code. It is based on a rolling-release development model. CM13 has a lot of features such as Cyanogenmod Launcher, Themes, Notifications, Lock screen, Buttons, System Profiles, Status Bar, Privacy, etc.

That’s it! I hope you have installed the Custom ROM for ZTE Axon 7. Leave a comment or feedback down below. Thank you!.

I hope this guide was helpful to find the Best Custom ROM for ZTE Axon 7 which is suitable for you.

Want to revert back to Stock ROM, Check out this tutorial on How to Install Stock ROM on ZTE Axon 7