Smartphones are nothing but shrunken-down units of computers that fit in your palm and gives you the capability to do absolutely anything right, from calling someone to making a billion-dollar transaction to a lot more. All the processes on the smartphone utilize a set of resources such as memory, cache, RAM, battery, etc. combining which, it can perform even the most colossal task while being just a few inches in dimension.

Since these resources can vary, it also dictates the processing speed of the phone as well but when the phone undergoes a lack of resources, no matter how many available resources in abundance, the screen freezes or the phone crashes, or at some times, it restarts again thereby closing all the apps and processes without saving the work done causing loss of data.

Asus restarting and freezing problem is severe and requires resolution asap. We have dictated a list of position fixes and troubleshooting tricks that you can use to fix it right away, although the effectiveness depends on the severity of the issue.

This is one of the most effective and quick fixes to resolve the freezing problem on your phone. Usually, the screen freeze when there are many apps and processes running together, resources are scarce, or the cache memory is corrupt or defunct. When you restart the phone, all the processes running on the system close forcefully, thus releasing all the earlier resources being used by these apps and services. You can press the power button and select ‘power off’ or ‘reboot’ as they both will do the same function, but that’s only for those phones that allow tapping onto the screen.

If the screen totally freezes and doesn’t allow the user to touch or do anything on the touchscreen, you can perform a forced reboot or remove the battery where the latter is self-explanatory. To perform a force reboot, the user can press the power button and volume Up or Down key for a few seconds, forcing the phone to restart abruptly. Their combination to perform a force reboot can be power key + volume up or power key + volume down, which may differ by make and model. There are many other troubleshooting tips that you can perform on your phone to resolve the restarting and freezing problem.

Safe Mode is one of the bootable partitions on your phone that allows the users and developers to conduct diagnoses on the system and its health. If your phone has been struggling to avert the freezing issue, you need to boot into the safe mode. In this mode, you can narrow down the apps causing the apps to crash and the smartphone to freeze, which could be due to bloatware and pre-installed apps or the third-party apps installed on your phone.

To understand the section on apps responsible for the freezing issue, you need to know that if the phone continues to freeze even in the safe mode, the reasons could be the bloatware and pre-installed apps. But in case the screen doesn’t freeze or crash when you are in safe mode, then the culprits are the third-party apps. Please have a glance at a recently downloaded app from when you are facing this issue and uninstall it. Continue uninstalling these third-party apps until the phone comes back to its normal state.

When you open an app or website or any service on your phone, your smartphone is intelligent enough to keep bits of data stored to provide faster access and lower the overhead timings that are possibly the reason behind the crash and freezing of the phone. The bits of data that we are talking about are stored in the format of cache files stored for all individual apps and the system as a whole which is problematic. Thus, you need to delete and get rid of the cache files as they get corrupt too often and cause app crashes or screen freezing problems.

You can delete all app-level cache files by going to the ‘Settings >> Apps.’ Further, tap on each app that seems problematic and click the buttons ‘Clear Cache’ and ‘Clear Data. Repeat the same procedure for all the apps. Another method is to delete the storage cache, which is comparatively easier. You can slide into the Settings and then go to Storage >> Cache Memory, tap on the cache and confirm deleting it.

All Android-enabled smartphones allow users to switch between the theme, scheme, and launchers that change the phone’s outlook as a whole. You can download launchers that mimic iPhone X, iOS 11, or any other Android smartphone. Not all the launchers available on Google Play Store are problematic, but the ones that are too fancy can cause the phone to crash. It can also create conflict between other apps, and thus, you must avoid installing these launchers.

Play Store has millions of apps for all Android smartphones, and that’s what makes it better than other operating systems at the same levels. But I don’t know why people think that they can stuff their devices with numerous apps that aren’t even required, thinking that they need it ever. The thing is, all the apps on your phone use some resources, and when there are more apps installed, an equivalent amount of resources are hoarded and not available for the actual apps that are running. This resource constraint causes the phone to lag and occasionally slows down the performance. It can also lead to various issues such as restarting and freezing problems that we are talking about in this extract. Thus, uninstall or disable apps that aren’t required.

Keep the apps up-to-date to avoid errors and bugs that can cause the system to slow down. Outdated apps aren’t healthy for the system as they can also contribute to app crashes which is a common sight on Android smartphones such as Asus. Thus, check out the available updates and perform the same to escape this wormhole of issues.

The same goes for the firmware that needs to be updated to ensure that it works properly, smoothly, and efficiently and avert bugs that can cause issues such as slowing down the system, causing performance glitches, etc. You can update the OS by going to Settings >> About Phone >> Software Updates >> Check for updates. 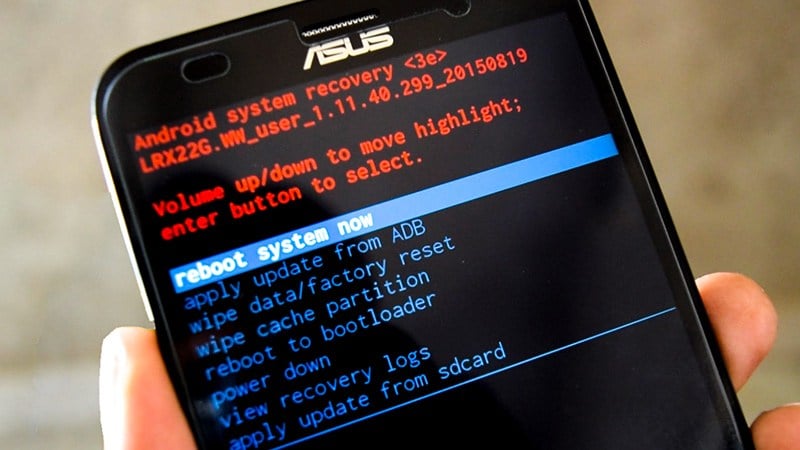 If you can’t find out the cause of the issue, perform a master reset via recovery mode. Follow the same procedure to boot into recovery mode, which is the same to wipe cache partition.

Now, the majority of issues related to software can be fixed easily. Still, hardware issues aren’t too easy to resolve without disassembling the phone to reveal its PCB. For this, you need an expert’s help. You can repeat the Asus restarting and freezing problem to any technician or authorized Asus service center to fix it. GetDroidTips recommend reporting the problem to the latter if your phone is well under warranty period.