One of the widely discussed topics on the internet today is Project Treble. You might have no idea but it’s one of the best things that soon going to happen with the Android Smartphone users. There are actually many Android users who are waiting desperately for it. Well, it is actually a Google initiative that aims to add more to the Android update procedure. In the present time, the manufacturers have to deal with a lot of issues and have to consider a lot of procedures to make the updates available for the users. Project Treble help the manufacturers in assuring the new updates reaches to the maximum number of users in the shortest possible time. Well, I this post, I will show you the list of project Treble supported Android phones.

The Project Treble is largely expected to boost the software update mechanism. Google has worked very hard to assure the maximum numbers of users are getting the Android update and thus fragmentation can be reduced up to a great extent. It is quite true that the fragmentation problems are extremely common in the Android since the day first. 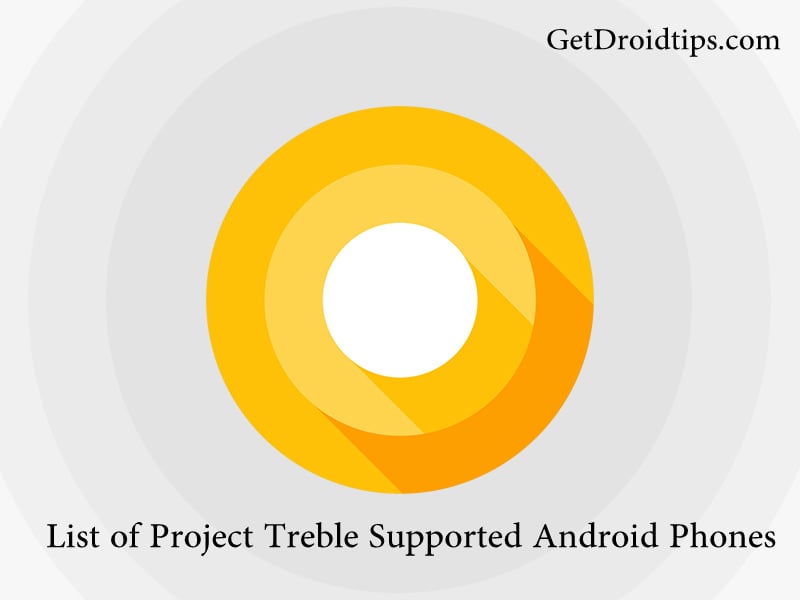 The fact is, only a very limited number of overall users get the latest software updates due to a flawless blend of reasons. One of the major factors responsible for this is OEM’s have to wait for the hardware manufacturers to provide the driver updates. In addition to this, they also have to consider a lot of customization which causes delay and the task very daunting. This is also one of the common reasons why manufacturers don’t provide the latest updates for some of the devices. However, Project Treble supported devices will be free from this problem.

As of now, only the Google devices get the latest OS updates and other manufacturers have to wait for a long time compiling the updates and other data. It sometimes takes more than a year for manufacturers to provide latest updates to their devices. One of the most common examples for this is, Google and Nexus devices are soon expected to get the Android Oreo 8.1 update while others are still working very hard to provide the Android Oreo 8.0 on their devices.

Google’s Project Treble will put the OS framework separate from the vendors implementations and manufacturers will be able to provide latest updates simply by updating the OS framework. OEM’s would be allowed to update the framework without creating any issues for the vendors. Treble has been integrated with Android Oreo 8.0 and it’s mandatory for all the Android 8.0 based devices to have it. However, the same has been made optional for the OEM’s to consider it for the existing devices which will be getting the Android Oreo. So if you need to know whether your device will be in the list of supported Android phones or not, check it out below.

In case your device is not on this list, you need not to worry about anything. This is because the Google is working very hard to grow this list of Project Treble supported Android phones in the coming months. It’s not just the android Oreo-based devices that will be getting Treble, but Google has already said that it is consulting with several OEM’s to make it compatible with other OS as well. As already mentioned that it’s not mandatory for the OEM’s to consider Treble in their build, you may or may not expect the same. As of now, OnePlus has officially announced that they will not consider the Treble to their devices.