You are living in the era of the internet and social media where you don’t need a desktop or laptop for internet surfing, as smartphones are there. Smartphones have become an undividable part of your life and you can’t even think of a day without your Smartphone. They are the one-stop solution for you and serve all your purposes. They provide you the facilities with which you satisfy all your needs while sitting in a relaxed mode at your home. So they are of high demands and especially the Android phones. Various Android phones are available in the market from renowned companies with their attractive and user-friendly features and they come with a great range of variety in terms of features, designs, and prices also.

Android is basically a mobile operating system customized by Google, based on the Linux kernel and designed mainly for touch screen mobile devices like smartphones  and tablets. Android’s user unit is chiefly based on direct manipulation, using touch gestures that slightly correspond to actions, like, tapping, swiping and pinching, to manipulate the on-screen objects, and a virtual keyboard for text input. Other than touch screen devices, Google has further developed Android Auto for modern cars, Android televisions, and Android Wear for wrist watches, each with the specialized user interface. Variations of Android are also used on various game consoles, the digital cameras, the notebooks and other electronics devices.

Why Android phones are so popular:-

Android devices are much more customizable

One of the most interesting features of Android is that it allows various different widgets so that you can customize your phone in your own way.

You can even go for a different OS

This is how Android takes customization to a completely new level. Android is an open source, so developers are free to take it, play with it and then create their own OS from it, which is known as a custom ROM. Some examples of custom ROMs are CyanogenMod or MIUI.

There is a much wider range of Android hardware

The open nature of the Android provides an opportunity to any company that they can make a smartphone which runs on Android. So that you can have the great range of variety while buying an Android phone in terms of price and features.

There is also more hardware and software modernizations

As Android is an open source, there are multiple companies experimenting and working on new innovations. Many new hardware features are presented on Android devices before they appeared on Apple handsets such as WiFi Direct,   multiple user accounts, and WebP images.

Apps are cheaper or sometimes even free!

There are much more free apps for Android on the Google Play Store than on the Apple App Store.

Apart from the official Google Play Store, there are so many other places to get apps for your Android phone. Even if there are risks in case of installing apps from other sources, Android warns you of the risks and leaves the ultimate decision up to you.

You get a lot more storage than that of an iPhone

The average storage on an iPhone is 16 GB whereas you can find Android devices with twice that, and in most of the cases, that can be further expandable by the use an SD card – an important feature lacking on the iPhone.

The iPhone 6 Plus was the first Apple handset to provide 1080p HD screen which had been already available on Android devices for two years.The current Android phones have already been advanced and you can find some android phones such as the Sony Experia Z5 Premium which comes with the 4K screen on and even some other cheaper Android already has 1080p screens.

An ambient display is a display which is customized to provide concise information to the user. They are basically used in various electronic gadgets and information appliances in office environment along with the home. Designed to accomplish the pre- attentiveness like a human brain, ambient displays make it possible for its user to process information without diverting the attention toward the background tasks.

An ambient display, also known as a glanceable display, draws the attention of the user only when needed. The primary intention is to focus on the main task; placing information on the so that user can be aware of each subtle change of any form. The basic task is to produce a graphical user interface (GUI) that is interactive and responds to the needs of the user. It should be able to transmit important information without being much overbearing. Ambient displays are now also used on huge systems, making the user aware of various states like weather updates or network load. Improved versions are being able with smart sensing devices which can even detect the mood of the user! 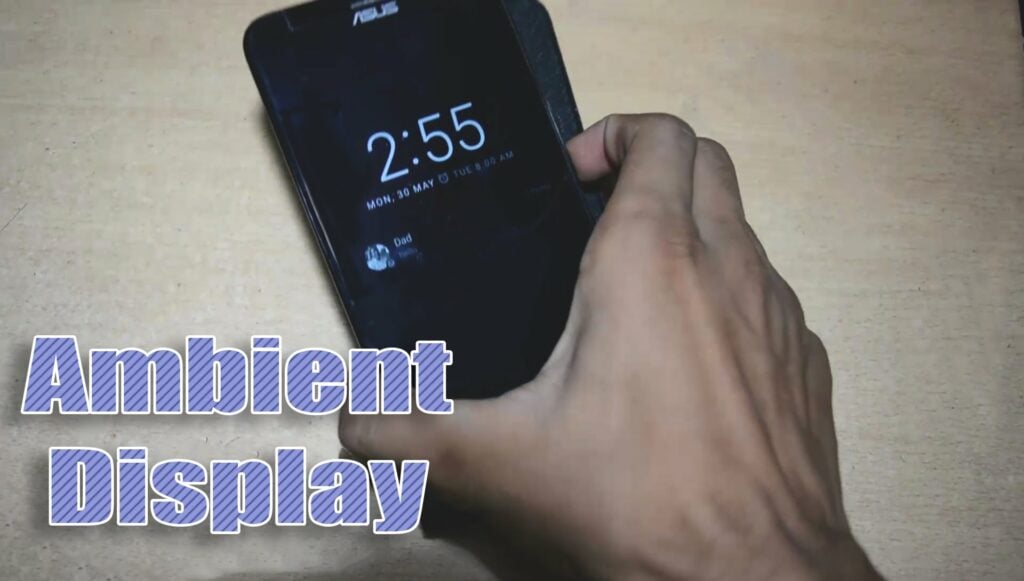 How to enable Ambient Display:-

Through these simple and easy steps, you can enable Ambient display on your Android device to enhance your experience of using it.