Realme 7 Pro (codenamed: RMX2170) launched in September 2020. The handset came with Android 10 and was later upgraded to Android 12. On this page, we will guide you to install the unofficial Android 13 Custom ROM on Realme 7 Pro. If you are someone who wants to install the vanilla version of Android 13, then this guide is for you.

Realme has soon grown to be one of the highest-grossing smartphone brands in India and for all the good reasons. Well, Realme 7 Pro is the latest smartphone and a successor of Realme 7 which comes with a new AMOLED display, a sleeker build, and better performance thanks to the new chipset. The Realme 7 Pro starts at a justified price tag of Rs. 19,999. 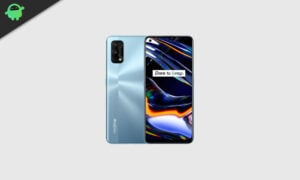 The Realme 7 Pro has a 6.40-inch AMOLED display with a resolution of 1080×2400 with a pixel density of 409 pixels per inch (ppi). While the display only refreshes at a standard 60Hz, the deep blacks and increased contrast of the AMOLED display will provide for a really good experience. The bezels are incredibly tiny and the display sports the front-facing camera is a tiny hole-punch cutout at the top left. Inside the Realme 7 Pro is the octa-core Snapdragon 720G processor which is a highly capable chipset when it comes to daily use as well as gaming. It comes backed up by either 6 or 8 GB of RAM which makes sure all of your frequently used apps are kept in memory.

The Realme 7 Pro features a quad-camera setup with a configuration of 64+8+2+2 MP and this system is quite capable of grabbing some really good-looking photos. The front-facing camera is a single 32 MP sensor that captures insanely good detailed selfies. The Realme 7 Pro is powered by a 4500 mAh battery and where it lacks in capacity, it makes up in the charging speeds. The Realme 7 Pro comes with the company’s new 65W fast charging which is absolutely crazy. The Realme 7 Pro also comes with a base storage of 128 GB which is easily expandable up to 256 GB using the micro SD card slot.

As the title suggests, we’ve shared the requirements and steps to flash the AOSP Android 13 build on the Realme 7 Pro (RMX2170) variant.

You can skip this adb and fastboot part if you have already installed TWRP Recovery on your Realme 7 Pro.

You must first unlock the bootloader on your Realme 7 Pro to enjoy any custom ROM.

Your device will now boot to the newly installed OS. With this, we conclude the guide on installing the AOSP Android 13 on Realme 7 Pro. Remember that the first boot might take time, and you might have to set up your device from scratch.

Flashing the ported Android 13 on your Realme 7 Pro will give you an early taste of the latest Android OS version. It looks like the Realme 7 Pro model won’t officially receive the Android 13 update from the manufacturer. So, it’s a good idea to get most of the features and visual treatment. However, if you find any extra bugs or stability issues, you should report them to the respective forum.