Unlike the many other action role-playing game available, Maneater uses a different concept of gameplay. The player assumes the role of a baby shark who is in its journey to survive. The storyline starts with you left alone as your mother shark is hunted down by the hunters. The player then starts the plot as they go about finding means to survive and to take revenge on the hunter of the mother shark.

Players will progress through the game by defeating powerful bosses and consuming humans to level up in the game. One such boss in Maneater is the Apex Barracuda, the first boss that you’ll encounter in the game. In this guide today, we’ll look at a definite strategy that’ll help you defeat the boss. So without any further ado, let’s see how to kill the Apex Barracuda in the boss fight in Maneater.

How to kill the Apex Barracuda in Maneater – Boss Fight

Coming across the first boss in the game, the Apex Barracuda isn’t as easy as you think it is. The Apex Barracuda will be level 10 when you encounter it so the first thing that you need to make sure is to level yourself up before facing off with the first boss. Get to at least level 10 before you take on the Apex Barracuda, although a higher level is always suggested. The next thing to note is to fight near smaller fishes. Draw the boss in to an area surrounded by a good number of smaller fishes and turtles so that you can heal pretty quickly. 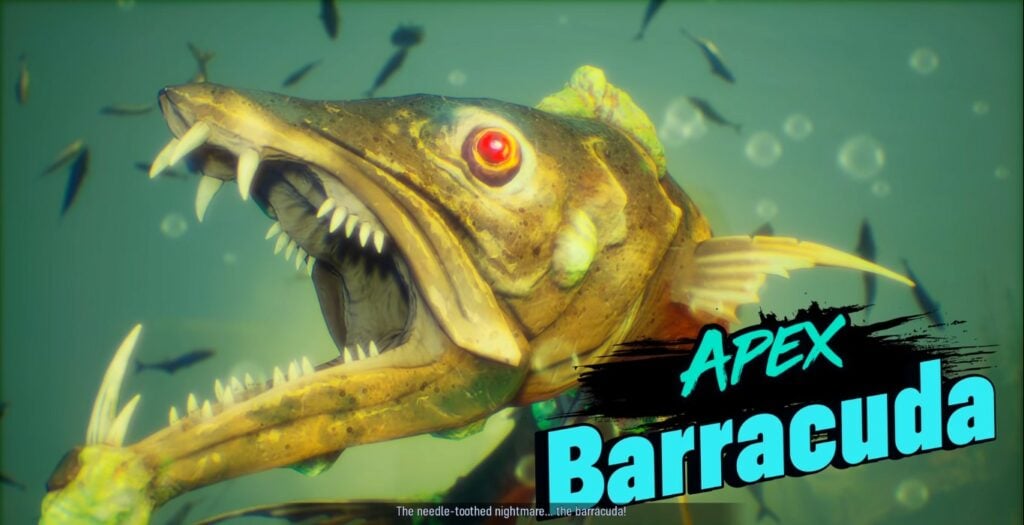 Getting into the fight, the Apex Barracuda is one of the fastest bosses that you’ll come across in the game. So the first boss definitely has a great speed advantage over you. And this is the point where you should make the most of your dodging skills. You will find the Apex Barracuda charging at you most of the time and you must put your dodging skills to the test and dodge these attacks to initiate a counter that will throw 3 or 4 bites at the boss. You must also use your tail whip to the full advantage when it glows in orange. Tail whip is a great attack that can help you make some pretty good damages to the boss.

It is important to acknowledge how fast the Apex Barracuda is. This boss is twice as fast as you might be imagining it to be so take caution. When it comes to its strength, the Apex Barracuda won’t last long since it doesn’t have good health. Managing to dodge the attacks and throwing in those counters will easily help you to mark the win. Try to focus your camera on the boss as much as you can since its faster speed can easily make you lose focus on it.

Summing up our guide, the Apex Barracuda is a fast, speedy boss in the game. In fact, this is the first boss that you’ll encounter in Maneater and it will be level 10 when you do.

Before facing off this boss, get yourself to level 10 or higher and fight near areas with a good amount of smaller fishes and turtles so that you can quickly heal if you need to. The key to defeating this boss is to smartly dodge its attacks and use your tail whip to the full advantage. That said, we hope reading the guide above has brought some valuable information and help to you. Please let us know by commenting down below if you have any further queries regarding the same.