Asus hasn’t been thorough with Android updates so this one’s a bit tricky as the OEM hasn’t confirmed the list or the timeline for Android 10 yet. Released on September 3rd, Google pushed out the update to its Pixel and Essential PH series on the same launch day followed by other OEMs updating one or more smartphones over the weeks it has been available.

Now that Asus has released the upgrade for Asus 5z which is a partnered device in Project Treble while others will be joining soon. This should start the procedure to roll out Android 10 across all device where ROG Phone II and Asus 6Z have been confirmed to get the update as well. 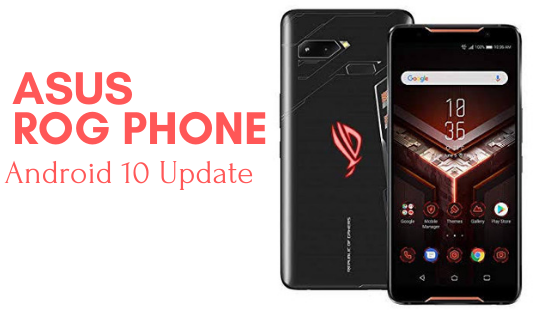 When it comes to Android 10, it surely packs a beefy catalog of features from gesture-based navigation to system-wide dark mode and so on. These features are either completely new or a revamped version of what was partially available in the previous Android OSes which makes the latest Android 10 a lucrative choice to adhere to. Read more to know what it has in store.

Updated on August 12, 2020: So, it seems that Asus isn’t in the mood of pushing the official stable Android 10 update to its first-gen gaming smartphone named Asus Zenfone ROG Phone. It’s been a year now since Google has released the Android 10 version officially and the Android 11 stable version is also on the verge of getting announced officially next month.

However, the things aren’t in favor of Asus ROG Phone users as they have to wait further and the frustrating one is that there is no estimated ETA announced yet by the company. Though the handset came with Android 8.1 Oreo out-of-the-box, it has only received the Android 9.0 Pie update last year. It’s expected that Asus ROG Phone lineups will get two major Android OS updates at least and it should be as well.

Currently, the company has released a new firmware update for the ROG Phone (1st-gen) with the software version 16.0420.2006.30 that’s based on Android 9.0 Pie. It also offers the updated July 2020 Android Security Patch Level along with the improved audio quality of the speaker while playing games and 3rd party app compatibility improvements: QMZG. You can find out more info here.

The handset has just received one major Android OS update e,g Android 9.0 Pie. It’s been almost 10 months since Android 10 officially released and the 1st-gen ROG Phone users are not sure whether they will gonna receive the Android 10 update or not. Therefore, it seems that the Asus ROG Phone Android 10 update is far enough and it won’t arrive anytime soon.

Asus is a bit sluggish when it comes to updates and could only upgrade the first ROG Phone a few weeks ago which leaves Android 10 lagging although wr.t. to the specs, I could say that the device must get its Android 10 pretty soon and i.e. by Q2 or Q3 of next year before it slides out of Android’s 2-years supported window but that isn’t the only parameter only so chill if it surpasses the window as well.

Asus is about to or has already rolled out its Gaming X Mode UI so we could see Android 10 stitched onto that as well although the first taker will be Asus ROG Phone II.

Asus ROG Phone is a beefy gaming-centric smartphone that brings Snapdragon 845 SoC on-board which was the flagship chipset of 2018. The device pairs together a colossal 6.0-inch display with 1080*2160 pixels resolution and has 8GB RAM and 128GB of internal storage on-hand thereby raving the chipset to its optimum capacity running graphics-intensive games is a piece of cake for it.

The device has a 13+8MP rear sensor and was released with Android 8.1 Oreo on-board and was later upgraded to Android 9.0 Pie.