The ZenFone Max Pro M1 has already received multiple Android 10 beta updates, however, it is not likely to get a stable update. This was recently confirmed by Asus Russian technical support according to which, ZenFone Max M1 Pro will not get any further updates that include the stable Android 10 build. As of now, take it with a pinch of salt as the company hasn’t confirmed it yet, however, if that’s true, Asus would lift the plug on support to Max M1 Pro. [Source]

A Taiwan-based multinational company, Asus specializes in smartphones, motherboards, and more. It’s Zenfone and ROG Phone series run on ZenUI based on its Android operating system although a different UI is being developed for its gaming-oriented ROG Phone series called Gaming X mode UI.

Search engine juggernaut Google launched Android 10 (formerly known as Android Q) on September 3rd where it officially named it as Android 10 thereby squashing the dessert nomenclature that it has been using for a decade now. It will now use the numerical identifiers to name its OSes henceforth. It has already arrived on Google’s Pixel devices along with Essential PH while many other OEMs have started pushing out the upgrade to a selected few smartphones as well where Asus 5z is one of the many. 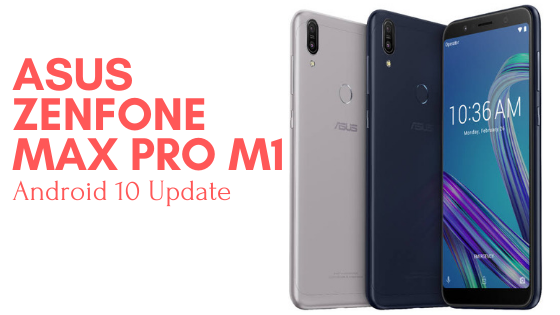 With that being said, Android 10 is a most-awaited Android operating system so-far. It has created a buzz ever since it was teased a few months ago followed by beta updates that were rolled out across Pixel devices and a few partnered devices. You can read more about the features that Android 10 embodies here.

Since the device got a bump from Android 8.0 Oreo to Android 9.0 Pie and that the phone was launched in April 2018, the device could get boosted to Android 10 aka Android Q somewhere around Q4 2019 and Q1 2020 or it could get a bit delayed in case Asus keeps it on the backburner while updating its currently confirmed Asus 5z, Asus 6z, and ROG Phone II that have confirmed to get the update.

Available in two variants i.e. ZB601KL and ZB602K, the Max Pro M1 has a 5.99-inch IPS LCD Full HD display and was released in May last year with Android 8.1 Oreo out-of-the-box. The mid-range device sports a Snapdragon 636 Octa-core processor paired alongside 3/4/6GB of RAM and 32/64/128GB of internal storage options depending upon the model you pick.

The phone also has a 13MP wide-angle camera flanked with a 5M depth sensor or its another variant brings 16+5MP sensor at the back alongside an 8/16MP sensor at the front where the highest specs are for 6GB RAM model only.