Black Shark is a well-known brand that’s only dedicated to gaming smartphones and accessories with a major market in China, Europe, and South Asia. Recently, the company has released the Black Shark Magnetic Cooler that comes with a couple of improved and best in class features or specs in the market.

Yes! The first thing you’ll notice is that it has an ultra-magnet design that means you don’t need to clip it on your iPhone 12 series devices (compatible) just other cooling accessories. Therefore, it’ll also take less space and perform much better due to Black Shark’s Fast Cooling technology. 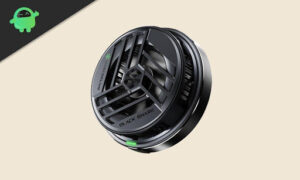 In this gaming era when people are more interested in mobile gaming on consoles or PCs and even on mobile devices, Black Shark has done a great job with the magnetic cooler accessory. It’s fully compatible with iPhone 12 series and Black Shark 4 series devices apart from most of the smart devices such as smartphones, tablets, TV-Box, Nintendo Switch, etc. Here we’ve mentioned a couple of highlighted features that you should know.

Well, the advanced ultra-magnetic connection and a fast-cooling technology from Black Shark have been included in the cooler that can easily go down up to 23 degrees in just 1 min of usage. The Black Shark Magnetic Cooler contains 112 high-quality heat transfer fins that work up to 7,200 RPM with the high speed of the fan.

Whereas the efficient heat transfer plates work together for a pro-level of cooling while intense gaming (especially on mobile devices) for hours. To recall, high graphics online multiplayer mobile games are easily prone to device overheating and battery draining issues no matter which smartphone you’re using. With the help of an industry-leading cooling device, your smartphone will keep cool for longer. 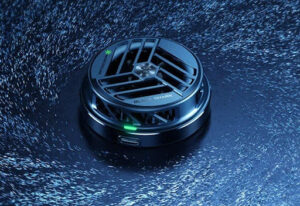 Otherwise, during intense gaming sessions, once your smartphone gets overheated, you’ll experience the warm surface at the back of the device as well as on the upper side of the screen portion. It’ll also affect your gameplay as the game will start lagging, you’ll feel jitters and loading issues whatsoever. Black Shark uses the military-grade ultra-high energy efficiency ratio for refrigeration chips (30*30) that delivers an improved refrigeration capacity.

According to Black Shark, it comes with a composite thermal silica pad for the first time that eventually reduces the loss of the cooling effect in the conduction path. Due to the magnetic connection, the cooler can also achieve a 360-degree full blowout or heat dissipation for extreme cooling to the mobile devices. We’ve already mentioned that it can reduce temperatures by 23oC in just 1 minute which is a huge plus point.

The all-new Magnetic Cooler is quite smaller in size and comes with a rounded shape that extremely fits on any smart device or gaming switch and is easy to carry. Due to the slimmer form factor, it only weighs around 73 grams, considered to be lightweight for sure. 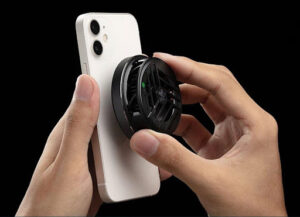 Talking about the outer ring, it was made with a metal anodic oxidation process for a smoother texture and feel while using it. It’s around 62mm wide and 22mm thick for a seamless gaming experience that shouldn’t obstruct your fingers while holding the phone for longer.

Another best part of this magnetic cooler is that it comes with a heat transfer magnetic sticker out of the package that can be easily put on any of the mobile phones, tablets, etc (flat surface) to start cooling with the proprietary cooler if any device doesn’t have a magnetic area by default. 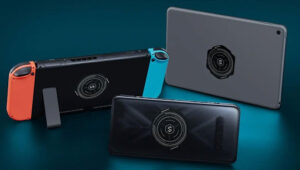 As the iPhone 12 series devices already come with Magsafe technology, only the magnetic cooler will do the job. That means if you’re using a gaming switch or any other mobile device without the inbuilt magnetic field then just apply the magnetic sticker on the back of the device and then connect the Black Shark Magnetic Cooler normally to start enjoying your gameplay.

It comes with a 1.5m long double-ended USB Type-C cable for charging. The magnetic cooler also comes with a LED indicator whether the cooler case is working or not. 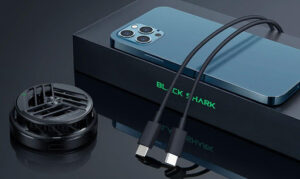 In another way, the green color LED indicator also looks stunning and gives you a gaming vibe whenever it turns on. Although the cable isn’t braided, the wire quality seems good enough to last longer.

A super and reliable magnetic connection of the cooler has a ring inside of 15 NdFeB magnets that can easily hold on the device than a clip-based cooling accessory to date. So, you don’t need any other attachments whatsoever for stronger connectivity and a longer period of hold time. 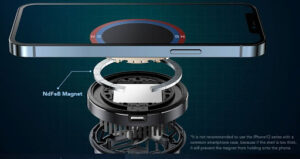 However, Black Shark has mentioned using the cooler on any of the iPhone 12 series devices with a case back for extra grip.

There are a couple of steps to use the magnetic cooler for the new users. Let’s have a quick look at the steps below:

4. Press and hold for 30 seconds & then let it be placed for around an hour before start using the cooler. This will allow the cooler and adhesive part of the sticker to properly fits and get dry for optimal performance.

5.Next, you should remove the protective film from the bottom of the cooler before use. Make sure to attach the magnetic cooler to the back of the device via the magnetic force without any kind of clipping system for a hassle-free user experience.

The Black Shark Magnetic Cooler is priced at $49.90 that you can order right now from the official global BlackShark website . That means the shipping cost and taxes may be included further according to your shipping address or region. It comes with a Black color option only. promotion: save $30 on Blackshark magnetic cooler, final price: $39 first 100 customers available, Link here.

If you’re a dedicated mobile gamer on iPhone 12 series devices then the Black Shark Magnetic Cooler will be the right product for you to reduce overheating and optimal gaming performance. Whereas if you’re another device user then you should consider this cooling accessory according to your preference and budget. We should mention to you again that it’s a magnetic cooler that can reduce heat up to 23-degrees which is really appreciable.