The rapid advancement in the overall features is one of the leading reasons why the demand of smartphones is blooming all over the world. The fact is smartphones can be utilized for performing any task and without worrying about anything. The users are always in a position to get the best out of the device they own. Because it’s an era of competition, there are a lot of manufacturers that has come up with most advanced features in their gadgets with the minimum possible price. Of course, this is to tackle the competition. One such manufacturer is Lenovo. Lenovo is a popular electronic manufacturer that belongs to China but has a global presence of almost all their gadgets. They have recently announced their latest smartphone and i.e. Lenovo S5. This post let you know about the common Lenovo S5 problems and fixes so as to help you deal with them without putting a lot of efforts.

One of the best things about all the Lenovo smartphones is they are amazing in every aspect and this Chinese manufacturer has always paid extreme attention in understanding the exact demand of their fans. However, like all modern devices, Lenovo S5 also runs on Android technology, a few common errors associated with the same can declare their presence. The fact is a few errors are closely associated with the Android technology. In this post, I have provided the best information on common Lenovo S5 problems and fixes. It must be noted that there are no major hardware problems associated with this gadget. Also, it is not necessary always that you might be facing them all at the same time. You can find various problems and their fixes discussed in this post and can consider the one that you are facing with your own gadget. 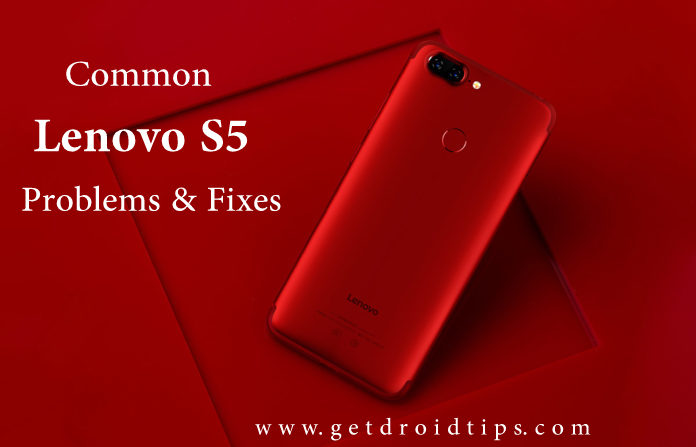 The Lenovo S5 comes with simply the best specifications like any modern gadget. There are certain features that make it simply the best available option for the modern day users of the smartphones. The device has a 3000mAh battery that let users keep up the pace with the full day backup with a decent use. It has a dual primary camera of 13MP and a 16MP secondary counterpart for capturing snaps far beyond your imagination. The device has fingerprint sensor technology for the better security and safety. The users can easily store 128GB of data which is enough for any modern user. The Lenovo has provided a hybrid SIM-SD slot that can be considered for extending the memory by upto 128GB easily.

In addition to this, the device has been equipped by the Lenovo with a 2GHz octa-core processor which simply let users make sure of the performance. Lenovo has announced this device in two variants and they are 3GB RAM & 32GB ROM and a 4GB variant with 64GB ROM. It runs on Android 8.0 Oreo technology and has a 5.7-inch display with which you can simply make sure of 1080 x 2160 pixels resolution. That’s all about the specifications of this device. Let us now understand the common Lenovo S5 problems and fixes.

Every smartphone has its own pros and cons associated with the same. While dealing with most of the problems, it is always recommended to the users to be very careful about the same. Generally, users don’t follow the instructions for troubleshoot and end up with other problems in the gadget. Getdroidtips.com cannot be held responsible for anything that goes wrong while following the information about the common Lenovo S5 problems and fixes mentioned in this post in a careless manner.

When it comes to dealing with a camera that doesn’t provide elegant outcomes, users always need to be clear of the fact that it’s not necessary always that the problem is due to a hardware problem in the device. You can try the following methods to get the things back on track once again.

Every smartphone comes with two default features whenever it comes to connectivity. These features are Wi-Fi and Bluetooth. Although there are several other apps available on the Play Store for connectivity, the fact is they all are based on either Bluetooth or Wi-Fi for their functionality. Therefore, it is necessary that the device must be free from any connectivity problems. In order words, both Wi-Fi and Bluetooth should work perfectly. In case they don’t, the methods to deal with the same are spotlighted below.

This seems to be a very daunting situation to all the users who face it. You might have no idea but the biggest thing is this problem could be associated with so many other factors. You can try the following to fix it

The Lenovo S5 has a 3000mAh battery installed in it. The users have to make it sure that they are using the device gently and carefully. The fact is there are so any tasks which consume more battery and often become the reason of this problem when users remain stick to them. There are several other factors which are responsible for this issue and you need to be clear of the fact that they can easily be avoided if you follow the methods and instructions for troubleshoot in the right manner. Here they are to help you get the best possible outcome

Are you facing a lot of issues which are related to SIM? If so, there are many important things which you should be careful about and the fact is these problems if not paid attention to can bring several others as well. Check out the SIM related common Lenovo S5 problems and fixes below.

All the tasks on a modern device can only be performed if the touchscreen remains functional. This is what you obviously know. Therefore you need to handle it carefully. However, if you are still facing some problems with the functionality of the screen on your device, the following are some of the best available solutions

Speed always matter when it comes to performing any task through a smartphone. Those which operate slowly often give reasons to the users to replace them with the latest ones. However, it has been seen that different users uses the Smartphone in a different manner. For a few, the performance related parameters are often violated and cause this problem. You need to be careful about the below listed facts when it comes to performance related problems in the device

If you connect your device with PC and fail to create the connection between them, there are certain things you need to pay close attention to. They are listed below

The overheating related problems in a smartphone declare their presence often and this happens most of the time during the multitasking. However, this is not the sole factor responsible for the same. There are several other factors too which can be held responsible for this. You can simply pay attention to the following solutions.

If you are facing this problem, here are some of the best available methods to help you fix it

You can deal with most of the issues through the information about common Lenovo S5 problems and fixes mentioned in this post. If the problem is still there, performing a hard reset can probably fix the same in all the cases. If not, of course, you need to look for the best available support for the device. For any other problem you are facing, let us know simply through the below comment section.