In the time where technology is at its best, the smartphones are no less than a technical-giant for humans. There is nothing wrong to say that with just smartphones, we have seen a whole revolution of technology around us. The biggest thing about these gadgets is even those who are not so educated have also started taking interest in technology and can now perform a lot of tasks through their smartphones. Well, it would be totally wrong if the entire credit is given to the manufacturers. Probably the Google has also played a significant role in shaping them by launching Android technology. It all began when the Gingerbread and Honeycomb started attracted the attention of smartphone users. No one imaged at that time that the day will come when Android will govern control over more than 70% of the global smartphones. Well, we all have contributed a lot in this matter and the present day gadgets are simply the best. One example is Moto E5 Plus. In this post, attention has been paid on the common Moto E5 Plus problems and fixes so that you can easily keep up the pace when it comes to dealing with the minor glitches. 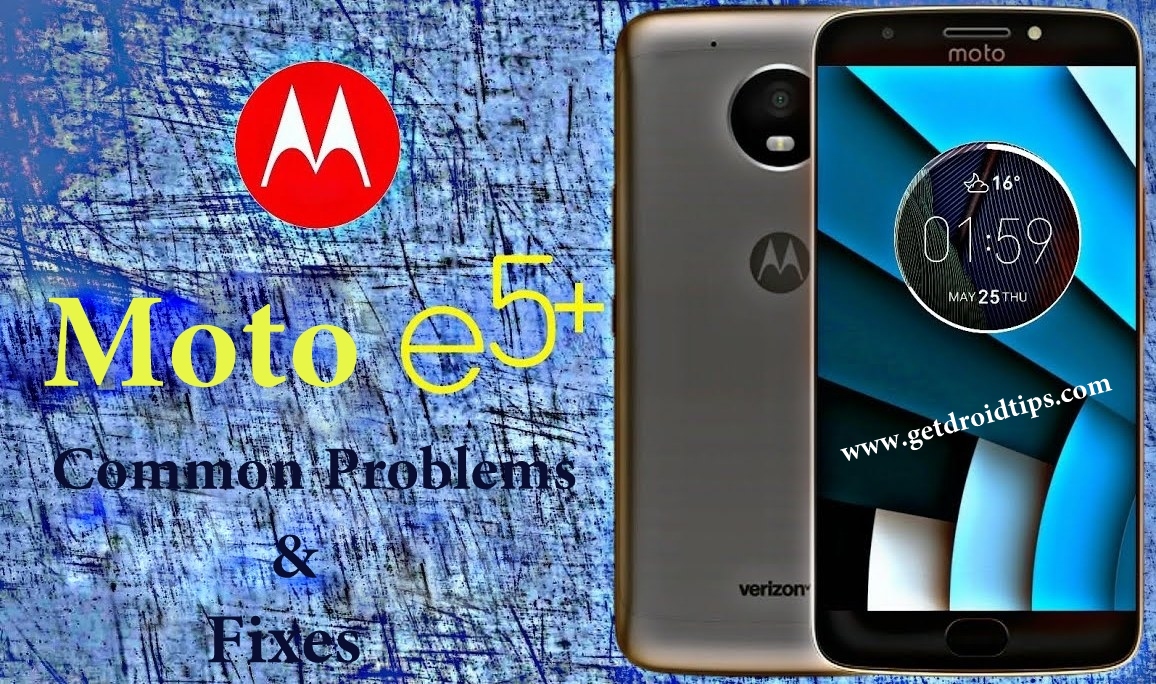 It just mentioned in the previous paragraphs that Android has actually played a significant role in shaping the smartphones but everyone has to agree that everything has its own pros, as well as cons associated with it. Although the cons of Android are not so major, the users have to face a few problems that are basic in nature. This usually happens because Android is an open source technology and different manufacturers modify it to fit their needs which often leads to basic issues which are faced by users while using their smartphones. This post reflects everything about the common Moto E5 Plus problems and fixes so that the users can simply deal with them without taking any additional help.

This post doesn’t support the fact that Moto E5 is suffering from major hardware problems. I would like to clear it once again that these problems are basic and can declare their presence in any smartphone. Therefore, you need nothing to worry if you own this device or planning to own the same. It might also be possible that you face only one or two from all which are discussed in this post. Check out more about the common Moto E5 Plus problems and fixes below.

Problem formulation is something that often needs users to have a basic knowledge on how a Smartphone works. It has been seen that users who don’t have much idea about the same often try to mold the methods they are suggested for problem formulation. This is to get the results quickly or because they think they can derive results in the way require. Well, I would like to request you not to follow such a strategy. This is because there are various problems you can invite in case you mold the guide. www.getdroidtips.com cannot be held responsible for the same.

This is actually not a big issue in the smartphone provided there is no hardware fault. You can simply grab the connectivity-related information common Moto E5 Plus problems and fixes without doing much. Here are all the possible actions that can be taken by the users

Devices often dissipate heat and sometime the level of same exceeds beyond a limit. This often seems to be a major problem in the device. However, it is not necessary in all the cases. You can easily keep up the pace in case you have the basic knowledge on the troubleshoot procedure. Here are some methods to help you in this matter.

Most users who report this problem later found its true cause was related with the Operating system or the applications installed. Of course, the chances of having a battery fault in a brand new device (atleast for the next 2 years) are very less. Therefore, you can go ahead with the following information simply

Unexpected behavior of the apps

The apps installed in the phone have a lot to deal with the overall functionality of the device. Probably you can perform a lot of useful tasks just because of apps. Thus, the unexpected behavior of a few of all can make you feel bad and can also impose a limit on the tasks you can perform through your gadget. To eliminate them simply follow the below guide. .

The Motorola has provided this amazing smartphone with a 6.0-inch screen and the good thing is the users can experience everything with a resolution of 720 × 1440. Of course, that’s great but this is possible only if the screen works properly. If you find any issue in the same, here are some best instructions to let you eliminate them totally in the shortest possible time.

Memory/SD card not detected in the phone

This is often very daunting situation and the users have to compromise with a lot in case it remains present in the phone for a long time. Those with more memory needs can simply understand the true importance of an SD card in a smartphone. Well, if there are problems you are facing, the below methods can help you eliminating the same.

Capturing those best moments in the camera and then later posting it on social media is becoming a vast trend in the present century. Well, there are situations when the users could get the quality snaps from the device camera. This can happen due to multiple reasons and you can eliminate the issue by following the below instructions.

Inserting the SIM in the brand new device is the first thing users do. It is a common situation when the SIM get undetected or the signal doesn’t appear on the phone. In such a case, you can go with the methods and instructions mentioned below.

If this is the problem you are facing with your Moto E5 plus, the following information related to common Moto E5 Plus problems and fixes can help you to keep up the pace simply.

In the present century no smartphone is expected to have slow performance. However, performance is actually a parameter that depends largely on various factors. You couldn’t blame it on one. The following methods help you to deal with them irrespective of the reason of their presence on your phone.

The connection between a smartphone and a PC is made not just for the purpose of data transfer. There are factors and tasks that can only be accomplished by connecting them with each other. The same is possible only if you pay close attention to the following methods.

This is the information about the common Moto E5 Plus problems and fixes that you should know. For any other query or for guide against common problems for other smartphones, keep visiting our website.