Android smartphones are grabbing the International smartphone market at a very fast speed. It is quite true that Android-based gadgets are amazing in every aspect. However, the fact that Android faces certain issues due to tiny bugs and its open source nature couldn’t be denied. In this post, I will introduce you with the common Xiaomi MI Mix 2 problems and their fixes. The fact is MI Mix 2 is a smartphone that is good enough to be considered but it actually suffers from some minor issues that have been reported by a lot of users. If you are one among them, this post is highly helpful for you. 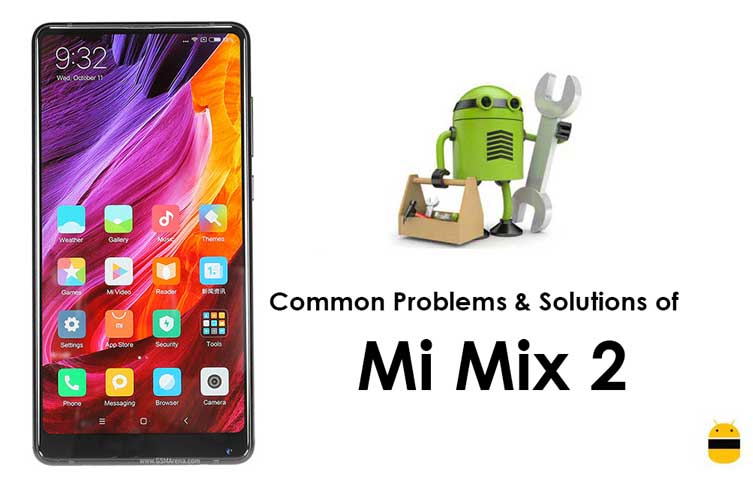 Most of the problems associated with MI Mix 2 are because of minor bugs in the OS as already mentioned. It is because of no other reason than this there is no need for you to worry about anything if you find any issue with your device. Here is the list of some common issues and the best possible solution against them.

MI Mix 2 WI-FI problem and how to fix it

A lot of users of this smartphone have complained and reviewed this device just because of its slow WI-FI issues. At the same time, slow speeds and frequently connection dropping are the other problems that have been reported. The very first thing you can do to avoid this issue is simply resetting your wireless router. Another method in case this wouldn’t work is to follow the below instructions.

The problem could be in the Wi-Fi antenna in case you still find it present even after following the above instructions. Therefore, you should contact the MI service center immediately. Depending on the nature and cause of the problem, you can get the replacement of your device.

MI Mix 2 Bluetooth problem and how to fix it

The Bluetooth problems are quite common in the Mi Mix 2. If you are also facing the same, the very first thing is to reboot your device. In case the problem is still there, simply clear the data and cache. Disable all the third-party applications. This can be done simply by enabling the safe mode. Another method that is best to keep up the pace in this matter is deleting the history of all the connections with when the device is previously connected. This is because with a few smartphones there is a limit on the number of connections a device can remember. Thus deleting the same can help you in this matter. Make sure your device has been updated to the latest OS version. If it’s not, do it immediately and there are pretty good chances that the issue would be gone.

MI Mix 2 battery issues and how to fix it

The Mi Mix 2 comes with a massive 4400mAh battery which is good enough to provide a huge backup once the phone is fully charged. However, several users have been reported that the battery doesn’t provide good backup. If this is a problem with your device too, the first thing you should do is updating all the apps to the latest versions in case you are yet to do so.

Check out the screen brightness and make sure that it has been set on the automatic option. Remove all third-party apps simply by taking the Mi Mix 2 in the Safe Mode. Close the apps that run in the background. This has a significant impact on the device’s battery performance. Turn OFF the Wi-Fi and GSP when not in use. If no method works for you, the last option is to perform a hard reset simply. The instructions for the same are as follows. Before following them, keep it in mind that all the date from your device would also be gone. Therefore take the backup of same before performing the hard reset.

MI Mix 2 charging problem and how to fix it

The reason that your Mi Mix 2 is having charging issues is nothing but the problem in the charging cable or in the adapter. Try to charge your device with another charger. The other possible cause is damage USB port. If it is the problem, you need to get it repaired immediately. The enhanced moisture level in the device can also be the reason for this problem. Leave the phone for some time at a place with the humid environment to fix this issue but avoid keeping it under direct sunlight. There are certain chances that the problem would be gone. If not, go to the authorized repair center and get it checked thoroughly.

The most common reason for this issue is nothing but when the processor is facing extra load. According to some experts, this issue could also be due to the bugs in the OS. So just wait, and let the latest Android version or update hit your device. It must be noted that there are certain apps that put extra load on the battery and is the reason for this issue. Delete them if you have installed from third-party sources.

You are now familiar with the common Mi Mix 2 problems and how to fix them simply. It must be noted that most of the problems are associated with the bugs in OS updating the device to same can probably eliminate this issue up to a good extent.

I hope this guide was helpful to fix most of the Xiaomi Mi Mix 2 Problems. Please leave a comment below if you have any queries or feedback.