Google has announced Android 9.0 Pie last year with some exclusive features like Swipe Gesture Navigation, Adaptive Battery, Adaptive Brightness, Digital Wellbeing, App Timer, App Slices, etc. The Digital Wellbeing app or feature is one of the most popular features on Android Pie. The app offers system restrictions or limitations to keep track or control over phone usage or app usage. The user can simply control any app using addiction by setting a time limit for a day.

Get Digital Wellbeing features on any Android

In order to use the Digital Wellbeing like features on any of your Android device running Android Lollipop version or higher, you can simply use a third-party app called ActionDash. It’s developed by the ActionLauncher team who has already provided a popular Action Launcher app. The ActionDash app works similar to the Digital Wellbeing.

It has the same kind of usage details and dashboard to keep tracks of the device usage for a full day. The app needs some of the permissions and then it will show you how many apps you have used with precise time spent, notifications count, screen unlock counts, which app has been used mostly, etc. You can additionally set the timing limit for a specific app to get rid off the addiction towards that app. It will simply block the app whenever you reached the time limit. However, you can remove or change the time limit as well depends on your need.

Whereas, the official Digital Wellbeing app works only on Android Pie running devices. Still, if you’re using a non-Pixel device and runs on Android Pie, you may not get the feature most probably. Therefore, using a third-party app won’t let you down. The simple but very informative UI dashboard will let you know everything you want with your usage. 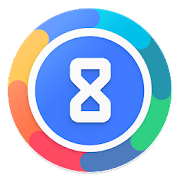 The app also comes with the option for ActionDash Plus which can be upgraded if you find this feature very useful for you. The premium version of the app offers advanced customizations, an ad-free user experience, full in-depth usage statistics, data backup, and more.

Hope this guide will help you a lot and you have successfully installed the Digital Wellbeing feature on any of your Android devices easily. If you have any queries, feel free to write down in the comments below.