If you’re the Samsung Galaxy S10e USA variant user then your wait for the stable Android 10 update is over. The South-Korean OEM has finally started pushing the US Unlocked Galaxy S10e Android 10 One UI 2.0 update that bumps up a new software version G970U1UEU2CSKP. It also brings all the native One UI 2.0 features and improvements to the device including Android 10. Currently, the firmware update is rolling via OTA and the US variant users will soon receive the update.

If you want to install the firmware version on your US Unlocked Galaxy S10e model, you can find out our full-depth firmware installation guide for Samsung Galaxy devices below. The update is waving for the Verizon, T-Mobile, AT&T, Sprint, Virgin Mobile, Tracfone, Bluegrass, and Nextech carrier users respectively. Apart from the stable Android 10 update, it also brings the latest December 2019 Android Security Patch Level.

The One UI 2.0 stable update offers plenty of features and improvements which we’ve mentioned below. Now, if you don’t want to wait further or haven’t received the OTA update yet, you can manually flash the firmware on your handset via ODIN Flash Tool. However, we will recommend you to keep checking the software update on an interval basis to get notified faster if the OTA update is available. 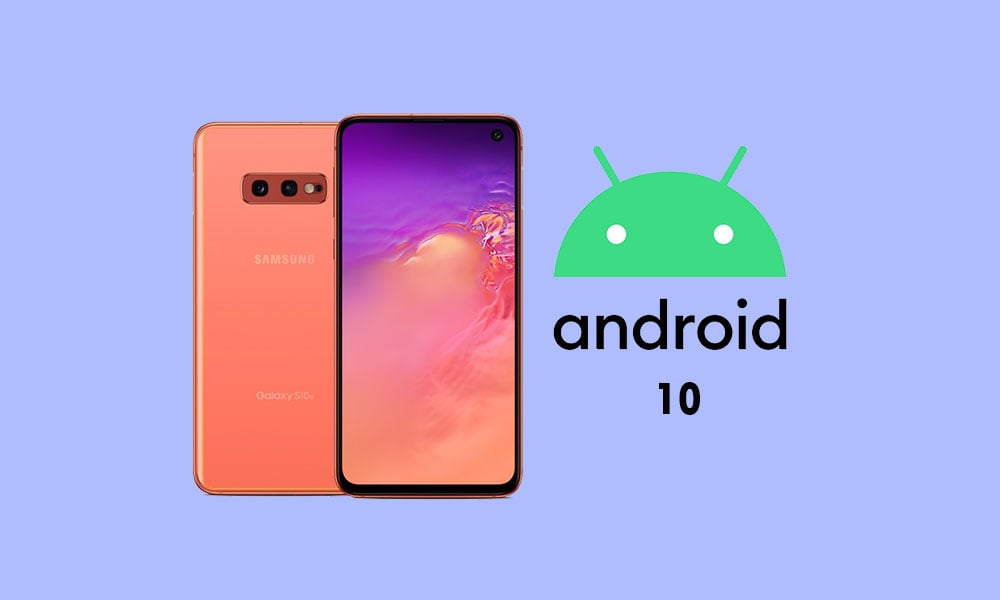 In order to check for the OTA update on your the US Unlocked Samsung Galaxy S10e, head over to the Settings > Software update > Download and Install. As the OTA is rolling in batches, it may take a while to hit on all the US Unlocked Galaxy S10e variants completely. Either you can wait for the OTA notification or proceed to the manual installation steps below.

Use a Wi-Fi network for better download speed and stability. Keep your device charged more than 60% of the battery level. Though this is a stable update, it may contain some of the bugs initially which will be fixed very soon.

Google has launched its 10th generation Android OS version officially called Android 10 (aka Android Q). As compared to the last year’s Android 9.0 Pie, the new Android 10 is quite stable and loaded with a bunch of features. This year Google has ditched the dessert item name and slightly tweaked the Android logo as well. Now, let’s take a quick look at the Android 10 features below.

The journey from the traditional TouchWiz interface to Experience UI to One UI has been quite experiencing for both the users and OEM. Finally, Samsung has launched its newly improved One UI custom skin for its Android Pie running Galaxy devices last year. This has really changed the whole game for the upcoming Samsung Galaxy smartphones a lot. The One UI is so much stable and polished skin that the users like it very much. Now, the One UI 2.0 is based on Android 10 and the successor version as well.

The next-gen One UI 2.0 is more refined and stable skin than the previous version. It’s also full of features that are taken from Android 10. It offers a complete FullView user experience with clean looking design and minimal overview. The animations are smoother and interactive with stunning icons. Meanwhile, Samsung has implemented the one-handed user interface that will help you out for most of the bigger Samsung Galaxy devices. The improved theme store, gestures, new camera UI, built-in screen recorder, Digital Wellbeing, dynamic lock screen, dark mode, useful shortcuts, etc available in One UI 2.

In case manual searching for OTA also fails, you can simply download the latest firmware zip and install it manually on your device. However, before installing, let’s check out the basic info about the stock firmware.

Here are the links for the easy firmware installation guide on your Samsung Galaxy S10e model using ODIN tool.

So, that’s it. Download the firmware and flash it now to step up your US Unlocked Galaxy S10e variant to the Android 10 stable update over One UI 2.0 and December 2019 patch. We hope that this guide was useful to you.