It’s necessary to locate all Elden Ring map fragments in order to discover the entire Map of the game. Otherwise, you’ll only be able to see paths and places of grace. However, the Elden Ring map is very large, and fragments cover quite a bit of territory, though it should not be too difficult to find if you know where to look. 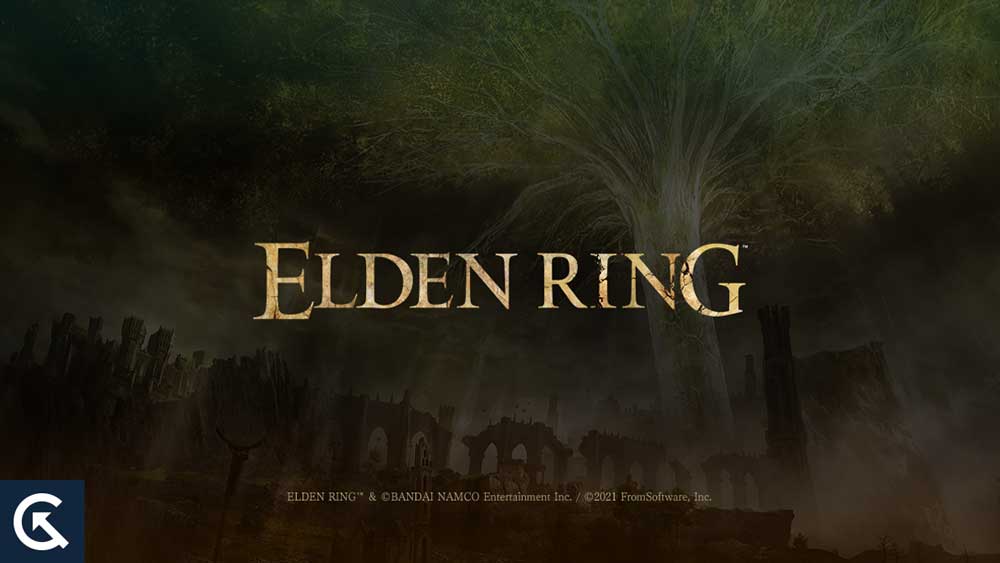 To locate Map Fragments, search for a small orange tower icon that stands out from a largely icon-less map on blank sections. An obelisk under which a Map Fragment can be found here. There aren’t marked maps for all regions, but if you see one, you know where you need to go.

First of all, you will probably find a fragment of the Limgrave Map in the first section. From where you start the game, move north (avoiding the Tree Sentinel boss) until you reach the Church of Elleh. Your first obelisk will be found on the path to the Gate front Ruins Site of Grace as you continue north.

You can also find the other part of the Map in Mistwood for Limgrave. From the Third Church of Marika, take the south path to find this forest area in Limgrave’s easternmost part. You should stay clear of the bears, especially the big ones scratching a tree, as you make your way through the forest. On the road you are traveling, you will see the obelisk holding the East Limgrave Map Fragment. 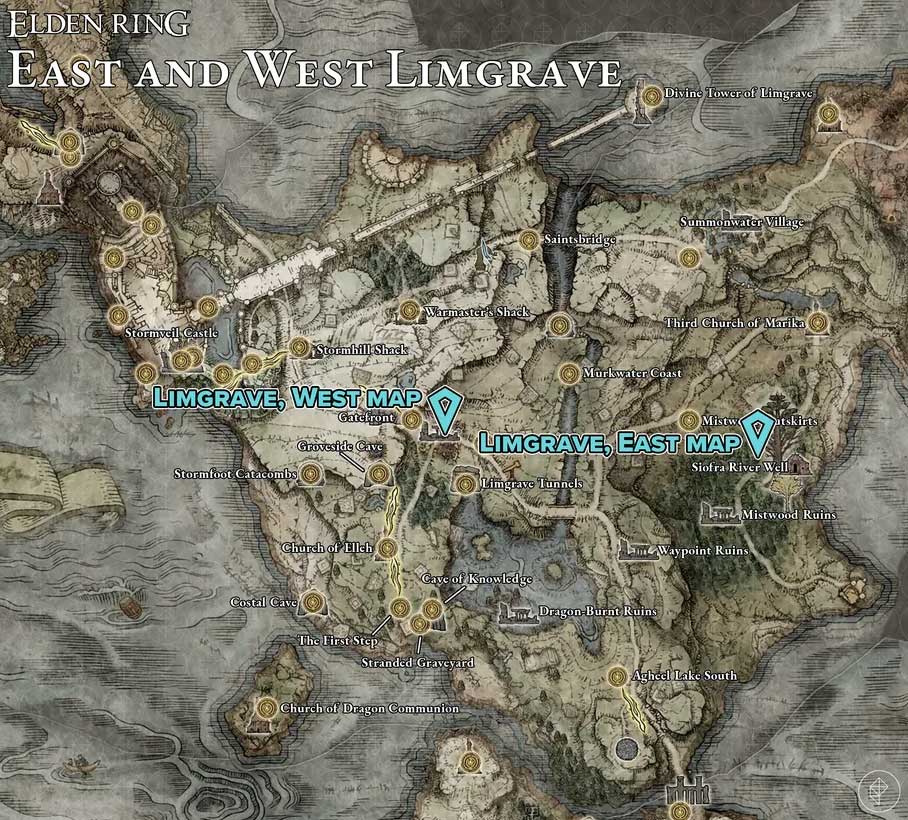 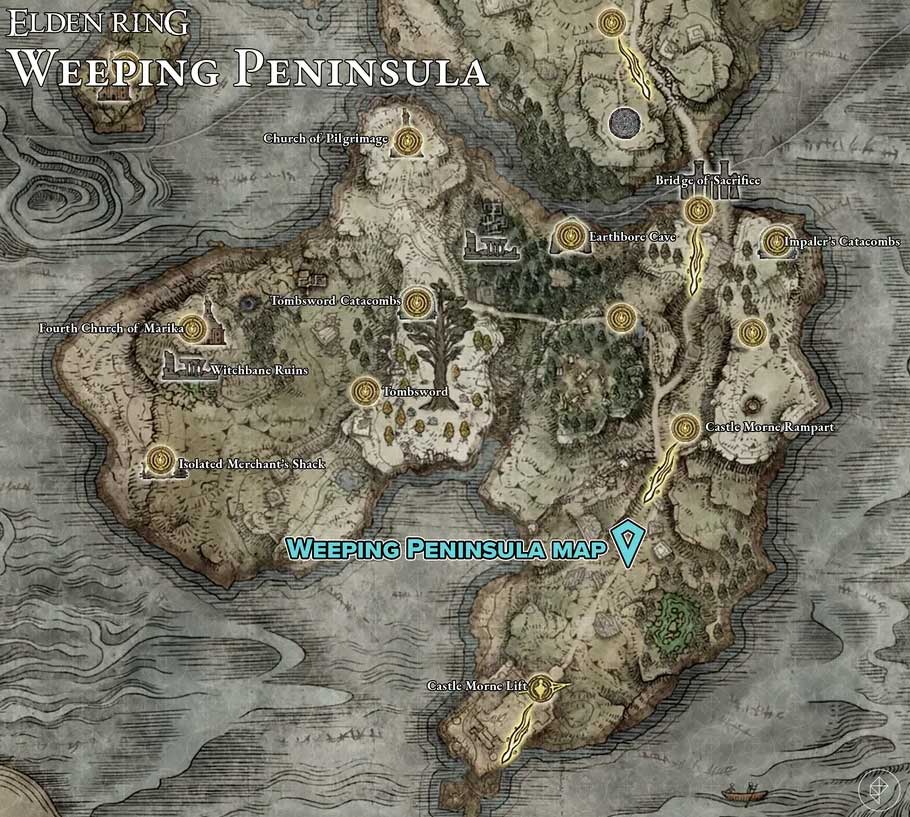 It might seem like this area south of Limgrave is part of the southern region, but it is its own entity. There are many gems to be found on the Weeping Peninsula, and it is well worth exploring.

After you have crossed the Bridge of Sacrifice, a Map Fragment is available. Follow the road south. There is also the Castle Morne Rampart Site of Grace that you will pass after passing a merchant. Go through a hole in the rampart wall and continue heading south. It will be easy to see the obelisk just ahead of you.

The Siofra River region can be reached via a well descending from Mistwood. You need to go to the Siofra River Bank Site of Grace to get the Map for this massive underground cavern. There is a temple visible from here. Near the rightmost column, near the base of the graphic, is a fragment of a map of the Siofra River.

As a first reward in Liurnia of the Lakes, you will receive this Map Fragment. You will find the obelisk with the Fragment just ahead when you reach Liurnia Lake Shore Site of Grace. However, you must stay alert, as a group of enemies awaits behind the obelisk in order to ambush you.

As you travel north past Raya Lucaria Academy, you will be able to access the northwest section of Liurnia. The northwest corner of the island is home to Sorcerer’s Isle.

Move that way, and you’ll see a path leading up onto the mainland from here. Located at the northern edge of Liurnia Lake, the Grace Site of Liurnia Lake is next to an Evergaol. You can reach the Map Fragment by walking northeast a short distance. 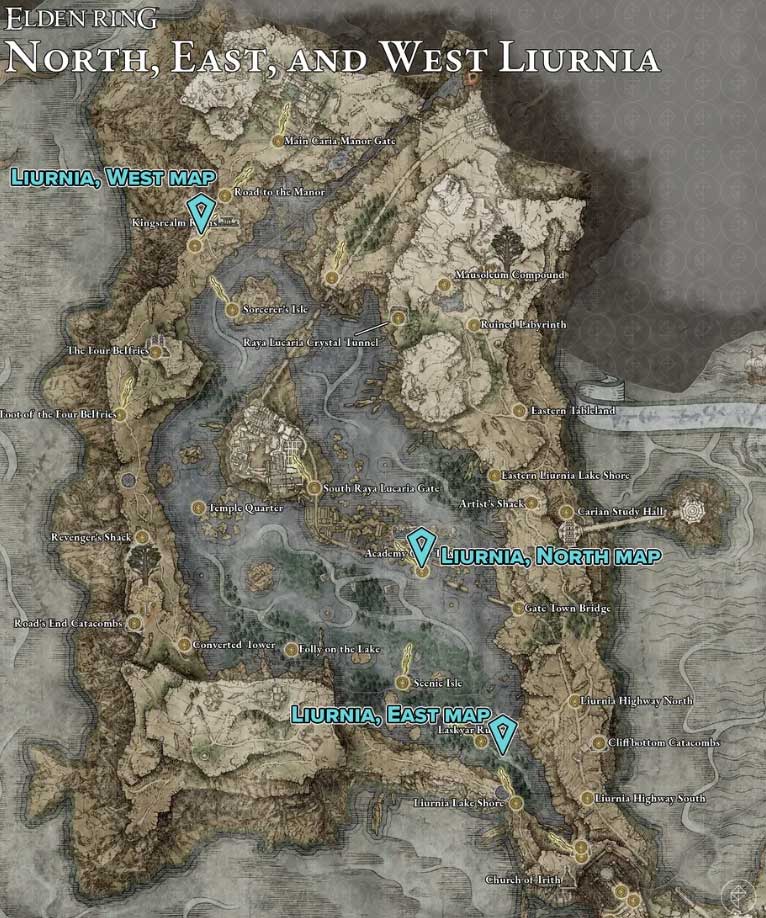 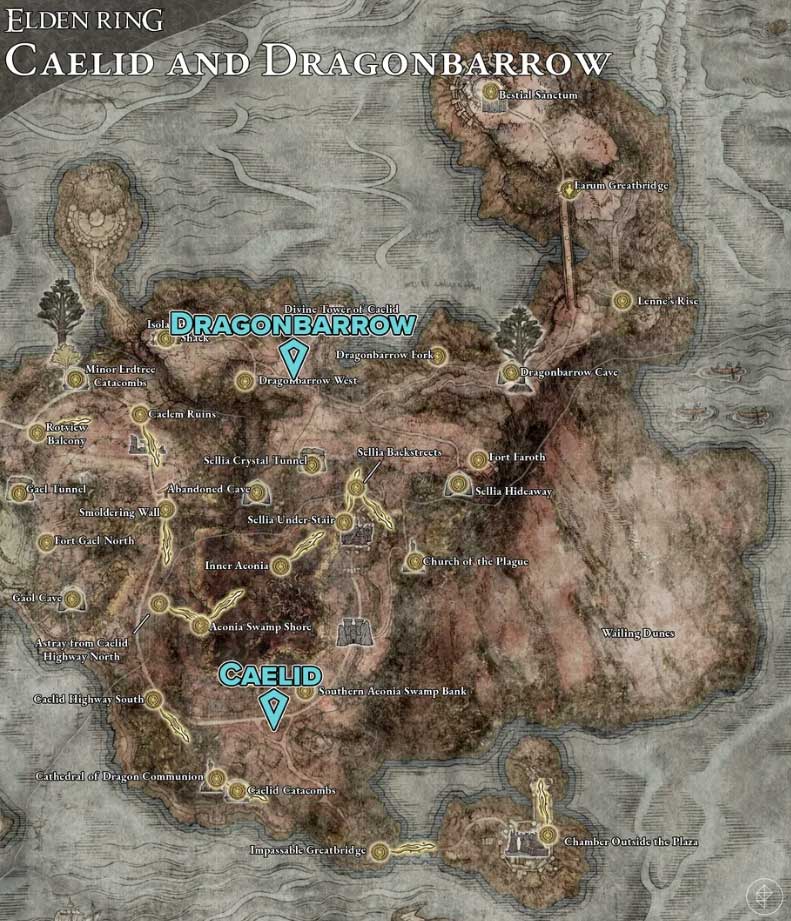 Caelid can be reached via a forked path after entering Limgrave on the main road. You should take the southern route. Selia Town of Sorcery lies north of Caelid, on this road. It makes a bowl-shaped turn south before heading north again. An obelisk holds a fragment of the Caelid Map, and it is just off the roadside at the southernmost point of the curve.

The route begins at the Rotview Balcony Site of Grace and heads east. While riding Torrent, you should be able to jump across the narrowest gap between Caelid and Greyoll’s Dragonbarrow.

A view of Dragonbarrow West’s Site of Grace is shown here. Map Fragment can be found directly on the road near this resting place. Consult your Map for directions.

In Liurnia, near the Eastern Tableland Site of Grace, you can find Ainsel River’s entrance in a domed building. You will come to a dam with stairs as you continue forward. If you turn right before the Site of Grace, a lift will take you down to the Uhl Palace Ruins. Run across the dam to find the Site of Grace.

Using the ruins as a guide, make your way to an entranceway that leads to another open area. You are being sprayed with meteor shower spells by a large unreachable enemy. Your enemy is perched on a structure. Make your way up there. Upon entering the room, you will see a merchant and a corpse clutching a map fragment from the Ainsel River.

When you have rested on the Site of Grace at the Lake of Rot, run the shoreline as far as you can. To the right of the corpse, you’ll see a shiny object. This is a map fragment from the Lake of Rot.

You should follow the road north until it splits if you arrive at Altus Plateau by taking the Grand Lift of Dectus. You will see the Altus Highway Junction Site of Grace on your left. After leaving the Site, continue north until you reach a small group of trees where the Map Fragment can be found.

You will encounter strong opposition when attempting to enter the Western Gate of Ledyndell. Two Tree Sentinels guard the door to the Capital City, and there are several options for how to approach them.

A Site of Grace will be found under a tree underneath the Golden Seeds once inside. In addition to this, you can find the Leyndell Map Fragment at the obelisk. 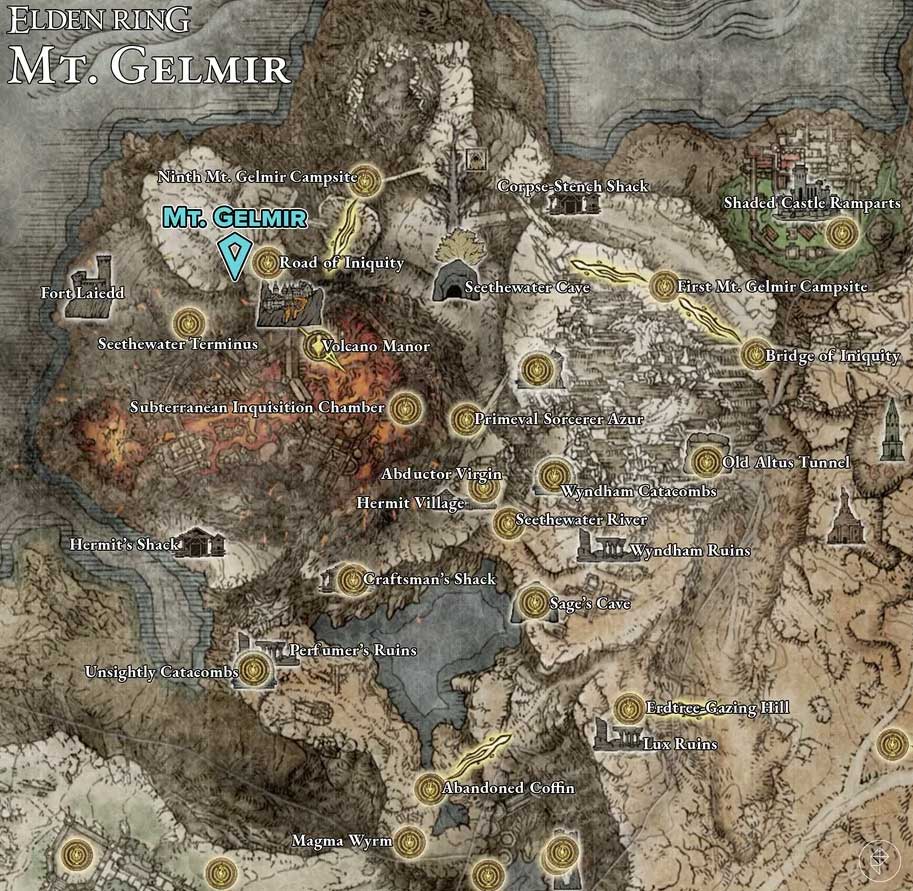 It takes a lot of effort to climb Mt. Gelmir. Despite the Map’s indication, it seems that you can reach the Fragment if you climb the entire mountain.

You can find the Golden Tree after turning around out the front door of Volcano Manor Site of Grace. Find another path down the cliffside that takes you down. Located just under a bridge, the Map Fragment is just a short ride down. There are, however, some enemies you need to be aware of.

You will be drawn into the Mountaintops of the Giants via the northeasterly path from the Grand Lift of Rold. The Map Fragment will be located on your right after you pass the obelisk.

Torrent will continue south through a camp of enemies after leaving the Whiteridge Road Site of Grace. The chain-link bridge will be your first encounter. Your left will be the East Mountain Tops of the Giants Map Fragment once you’ve crossed the bridge. 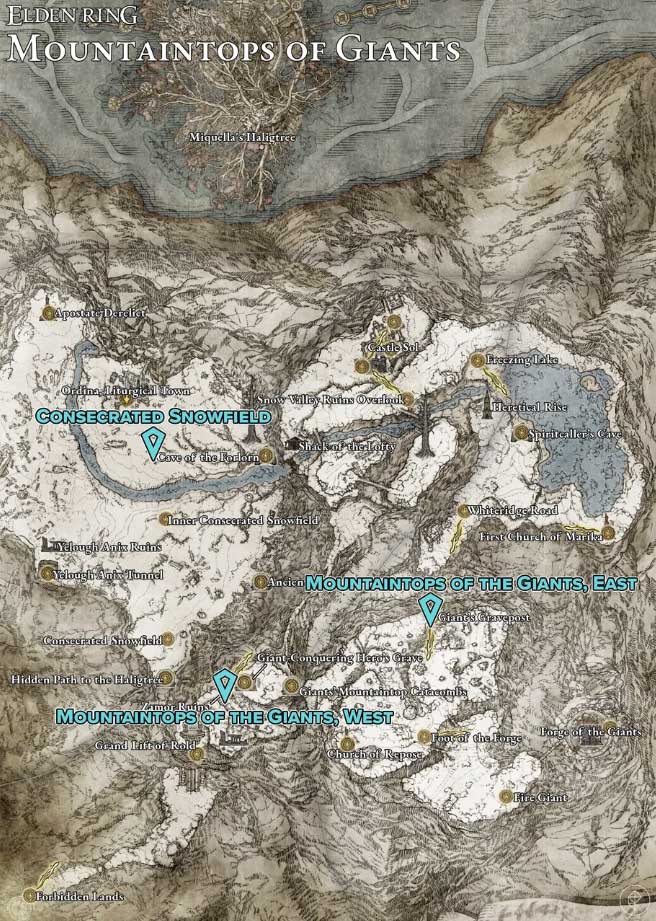 So, that’s all we have for you on Elden Ring map fragments locations guide. We hope that this guide has helped you. Meanwhile, for more info, comment below and let us know.