Elden Ring is an action RPG released in 2022 with a massive open-world environment and a focus on combat and exploration. Players can unlock various locations and complete clearing them to progress through the game. Some of these locations are optional, but they can be played through to get more items and rewards. 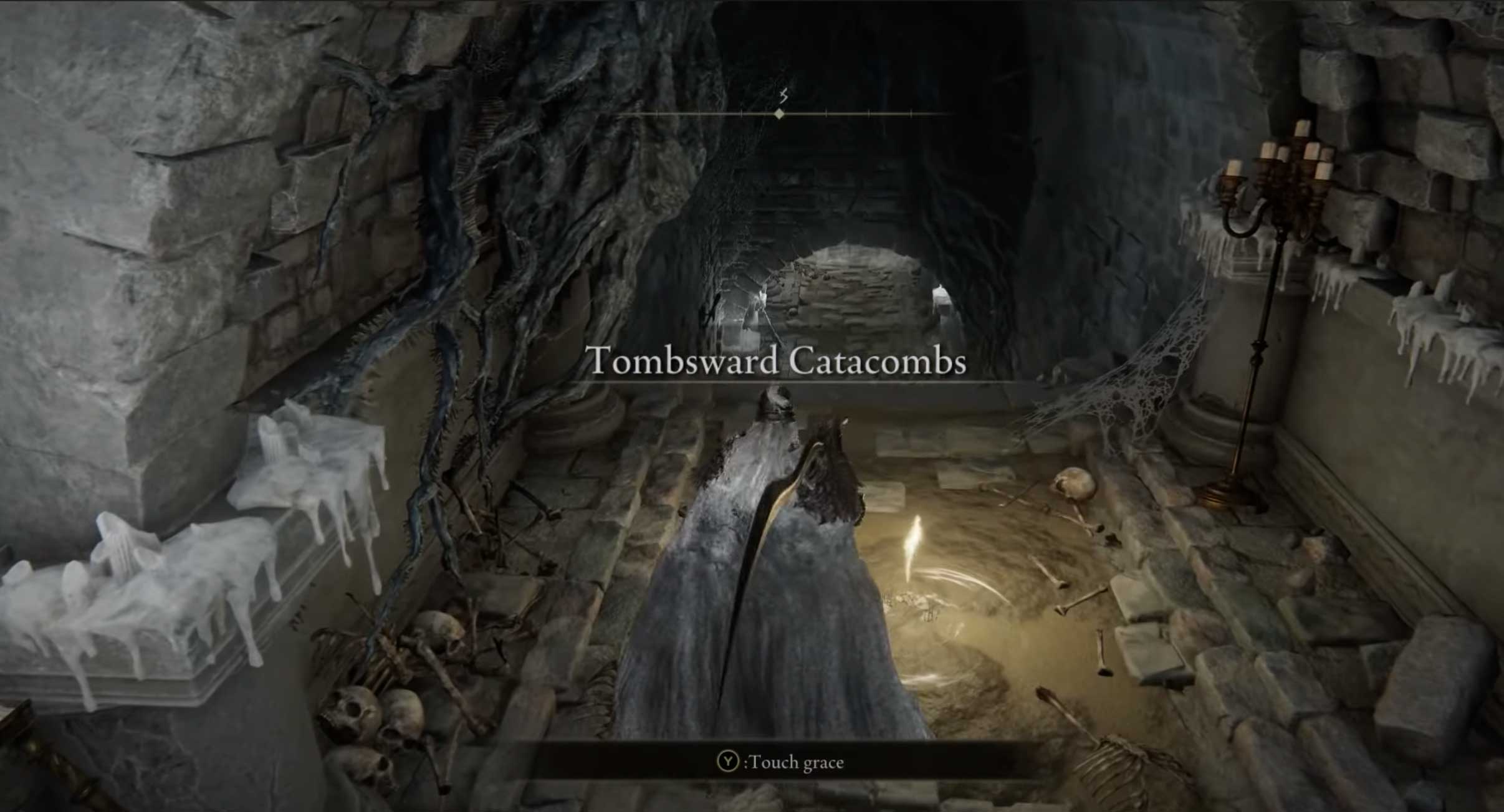 Tombsward Catacombs is pretty straightforward as it is a linear dungeon, and you can follow the path to get to the end, which has a lever. This lever will unlock the door to the boss. You can pick up some items throughout the Catacombs, which will alert the dead. Watch out for the Skeleton enemies with ranged attacks and a statue that spits fire at intervals.

To find the Tombsward Catacombs, you must travel north of the Minor Erdtree in Weeping Peninsula. You can find it by heading directly south from the Church of Pilgrimage. If you are familiar with Catacombs in Elden Ring in general, unlocking it should be easy. The entrance is hidden behind a stone pillar on the right side of the mountain with some broken-down structures.

After stepping through the doors, you will find a Site of Grace that you can use to replenish your health. Make your way further in and you will find a secret room sealed by an imp statue. If you have a Stonesword Key, you can unlock the sealed area to find Nomadic Warrior’s Cookbook [9]. within. Once you have picked up the Cookbook, a couple of Skeleton enemies will rise, but you can run past them. 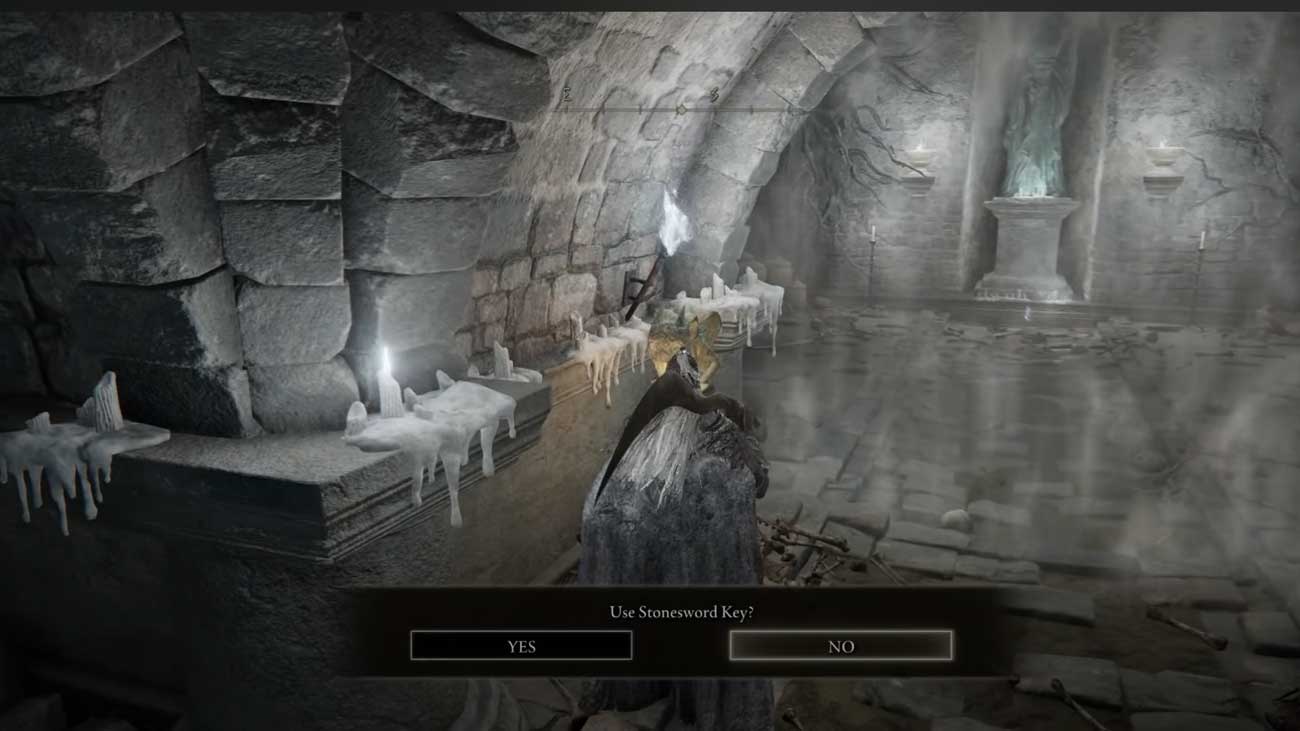 Collecting the Cookbook is optional, as you don’t need to get this item to explore the rest of the Catacombs. Simply head left and downstairs if you want to fight the rest of the enemies and look for the lever to beat the boss.

Deeper into the dungeons, you will come across Skeleton enemies who will shoot arrows and throw fire pots at you, so make sure to watch out for those. Run past the first room which contains a door that is yet to be unlocked. On the right side, you will see a Skeleton enemy with a fire pot that you need to avoid. Quickly grab the Grave Gloveworts on either side of the passage.

Two Skeleton archers will be awaiting you when you step further into the Catacombs. There is another Grave Glovewort on the right side, and a Ghost Glovewort straight ahead. The Skeletons are standing behind the pillars, and you can choose to take them out or avoid them entirely by dodging the arrows. If you want to kill them, use the pillars to your advantage and take them on one by one.

As you leave this room, a Skeleton warrior will be standing in your way, holding a Grossmesser. You can fight them or dash past to enter the tunnel on the right with the flaming statue. Make sure to avoid the flame as it deals out a lot of damage. It will breathe down the tunnel at short intervals. You can avoid it by dodging into the small room on the right side of the passage.

Time yourself, and collect the Human Bone Shards in the middle of the tunnel. Sprint for the room with the statue before it begins to start firing away again. It’s a very short interval, but if you time it right, you can make it. Shooting at the statue will cause it to descend, but it can be tricky. Once you are in the room, you can also hit it with a melee weapon to get it to stop. Collect the Grave Violet in the corner of this room, avoiding the Skeleton that rises from the ground.

After you have jumped onto the statue, it will begin to ascend to the second floor. Watch out for the Skeleton with a fire pot on the left side of the platform you will be jumping on. Run through the passage and pick up the Grave Violet on the left. In the next room, you will find a Grave Glovewort. It will be guarded by a Skeleton archer.

Make your way to the golden statue where there is another Grave Violet. A Skeleton will lash out at you with a Grossmesser, and you need to kill it. There is a lever at the statue that you need to pull. This opens the locked doors at the beginning of the Catacombs. You can quickly jump off the platform and run up the stairs to avoid the Skeleton archers that will spawn. 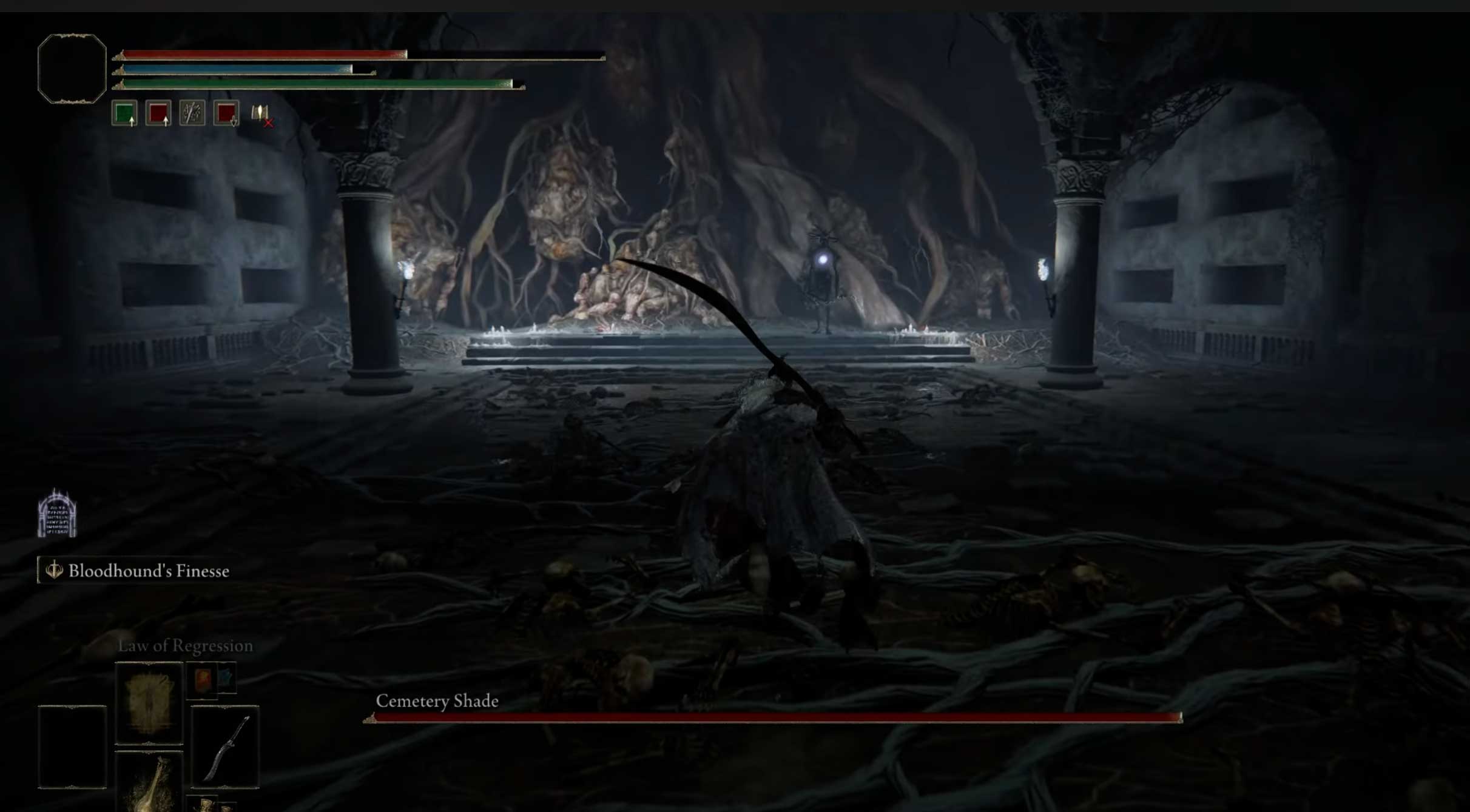 You can rest at the Site of Grace if you need to, which is at the beginning of the Catacombs. Otherwise, the door to the boss battle is on the right side. You will need to walk into the golden mist to reach the battle arena of the Cemetery Shade. They can teleport short distances and attack you with Bloodhound Fang, which has Bleed effect. As for their ranged attacks, they throw green orbs of poison. You can block this attack with the pillars in the room.

The Cemetery Shade does not pose any real threat, as they have only 800 health, and you can kill them quickly with a high-damage dealing melee weapon. You can also use arrows to shoot them from a distance. Once you have beaten the boss, you will get 2200 runes and Lhutel the Headless, which is a legendary Spirit Ash.