Text messaging on a phone goes way back to the 90s. Traditional messaging made its way into smartphones as well in the last decade. We have been witnessing a steady development in the ways we send or receive messages. Thankfully in recent years, we have applications like WhatsApp that has made possible the transfer of textual, audio, video messages to our contacts. However, the good old text messaging is still there on smartphones. Naturally, a smartphone enthusiast will question, is that it.? Can we expect some more development on how the standard messaging works.? Well, the answer is definitely yes. In fact, Google Messages RCS is going to change the way we know the Google messaging app on our smartphones.

RCS abbreviates for Rich Communicator Services. It will provide on the go file transfers between the sender and receiver. Also, the sender gets to know as receiver types a reply. Sounds familiar.? Well, it’s similar but not the same. 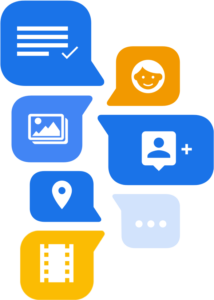 Basically whatever you get to experience on a third-party messaging app like WhatsApp or Messenger, the same you can experience on your native Android smartphone message app. Yes, it’s independent of any third-party controller.

Though initially RCS was planned to launch for a few major tele-carriers in the US, now the feature has gone global, not officially though. Enthusiasts have discovered a trick to enable Google Messages RCS on the messaging app. This means with this process anyone with an Android smartphone can enable RCS on it.

So, the trick is you get this app called the Activity Launcher. Remember to turn off the Wi-Fi.
(Note: GetDroidTips will not be responsible for any issues with your phone if you decide to modify it with non-official apps and methods. Follow this process at your own risk)

The option to enable RCS may take a few minutes to show up. In case, you don’t see anything, you can go to Settings >clear the app data of Carrier Services > force stop Android Messages.

Then repeat the above steps by going to recent Activities. In the end, when you open your Android Messages, you should see a prompt that will ask you to upgrade to RCS. All you have to do is hit Upgrade Now and enjoy the Google Messages RCS on your smartphone.

Reports say that the Messages RCS is also available for smartphone users in India. Anyone irrespective of the tele-carrier they use can use this trick to trigger the RCS upgrade.

So, if you are interested to experience Google Messages RCS on your Android device, do give this a try. On the other hand, if you don’t really like tweaking your phone, then, of course, you can wait till Google makes the RCS official throughout the globe.

Besides what is your view on the RCS.? Do you think it will develop further in the coming days.? Can it be the efficient first-party alternative for WhatsApp and similar applications.? Share your views in the comments below.