According to a rough figure quoted in 2013, more than 2.5 billion Bluetooth devices which include smartphones, headphones, speakers, and every other product with Bluetooth were shipped in that year alone and it was estimated to increase two-fold in coming four devices which indeed it has increased. Bluetooth is one of the popular modes of exchanging and transferring data from one Bluetooth-enabled device to another that includes your smartphone, speakers, headphones, home appliances, other electronic devices which are Bluetooth-enabled. It is easy to connect, use, disconnect, however, it is just the plus side of the story. There is a downside of the story too which is called Bluetooth pairing problems. It is one of the many issues that Bluetooth users observe in their daily life. 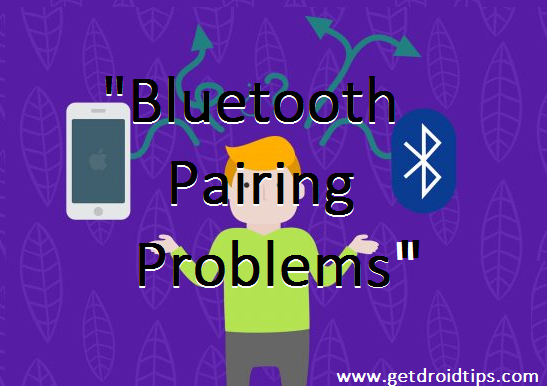 What happens in Bluetooth pairing problems is actually self-explanatory. When you are trying to connect to another Bluetooth-enabled device, it doesn’t pair and it is sometimes sweat drenching when you keep on trying, trying and trying but to no avail. It is similar to how you would try non-stop to connect to a free wifi network which is too dicey and won’t connect easily. But believe me, the grass is greener on the other side. Once you are successful in pairing the devices, you are free to enjoy the unobstructed transfer of data which is still used across billions of products. Okay, at GetDroidTips, we decided to confront this issue and try to find as many solutions as we can and we found a lot of ‘em after spending a decent amount of time troubleshooting various devices.

Why do Bluetooth pairings fail at times?

First of all, like any other component on your phone or any smart device which has a Bluetooth connectivity feature, it has a working hardware and a software (driver) that when combined, help the users access the Bluetooth feature. So, if anyone of them isn’t working properly, then you might have a pairing issue which can also be given such as you won’t be able to use Bluetooth even after having one.

After decades of research and innovation particularly in the Bluetooth feature, there have been many versions of this feature such as Bluetooth 2.0, Bluetooth 3.0, Bluetooth 4.0 or not. So if you are trying to connect to a Bluetooth device which has a higher version than yours, sorry but you won’t be able to connect. However, most of the phones have a dual radio that will connect to more than one type of version without any hassle.

Moving further, errors can be caused due to incompatible Bluetooth profiles which is something helps one device to understand the data sent by another device via Bluetooth. Take an iPad and a Bluetooth keyboard might not pair because the iPad is lacking Human Interface Device Profile that allows it to pair with the keyboard and take the commands fed on it. These are just a few errors that we decided to point out before we can actually state the things you can do to fix pairing problems.

How to Fix Bluetooth Pairing Problems?

Here are the few things which you can do to fix the Bluetooth pairing problems on your device.

Check out the pairing process for your device

Different devices from different smartphone manufacturer can have different modes and processes of pairing with one another. Usually, you would turn ON the Bluetooth, scan the available Bluetooth devices and connect to it. Sometimes, you need a password to authenticate the pairing while some devices require you to tap the device with another like in NFC-enabled smartphones to pair with a Bluetooth device. When it comes to iPhone and Nike+ FuelBand, it requires the users to press and hold the button until the latter secure pairing with the former. These are just a few methods that devices employ to connect to a Bluetooth.

This is important to know since, if your phone adheres by process A, it won’t pair with an incoming Bluetooth device using process B where A and B are two distinct procedures to connect over a Bluetooth network.

If you tried pairing with a device over Bluetooth but could not, take a moment and read this method. Toggling in for several times can help curb minor glitch with the feature and kickstart it to accept association and pair up with your device instantly. Since most devices have dedicated shortcut for Bluetooth on the desktop such as Android has it on the notification tray that required users to drag down while iPhone lets the user use it when he/she drags the screen up.
A simple tap on the Bluetooth option and turn it off for few seconds.
Now, tap on it again and turn it ON and check if the problem is averted or not.

When using Bluetooth feature on their phone, many users forget to make their phones discoverable which pose a problem when the other device scans for available Bluetooth networks and fails to find your device. Simply go to the Bluetooth settings on your phone, tap on settings and select discoverable mode. Most of the Android smartphones have a 2-minute timer within which the phone will be discoverable.

Check if the devices are compatible or not

Now that important. With Bluetooth on your phone or any other gadget, you can pair up with other gadgets wirelessly without any problem. However, you need to understand that there are certain requirements imposed by some devices which if met, the devices allow pairing. As explained above, a device will older Bluetooth version tries to pair with a newer version will not be possible.

Yes, if your phone has a Bluetooth Smart feature or if it has a dual radio setting pre-installed, it will allow pairing to vivid devices but since this feature is limited, you can expect a different method in this explicit guide to fix the pairing problems.

Bluetooth may be a powerful method to send and receive data across vivid types of devices, it is still confined to some parameters that must be followed. If your devices are more than 30 feet away from each other and that too unobstructed, there will be a problem connecting and pairing with the recipient. So if you have been experiencing pairing problems off lately due to the fact that the distance between two devices is greater than 30 feet or filled with obstruction, take a moment and try to pair by placing the devices in proximity and without any obstruction.

It is possible that your phone isn’t able to pair with another Bluetooth device due to overloading caused by other processes and apps on the system which have used most of its resources. Rebooting the device has been associating with a quick fix to sort many software and performance-related glitches and many users have already testified that their Bluetooth pairing problems were fixed when they performed a soft reboot on their phones. So what are you waiting for? Try this hack and let us know if this trick helped you or not.

Forget or delete the paired device and try again

If you are an avid Bluetooth user and love pairing with the headphone, stereo in your car, speaker at your home, and other gadgets, there is a strong possibility that a new device isn’t pairing because you have run out of space to store new device. In case if the phone pairs but doesn’t allow the user to send and receive data, in both this situations, deleting the entry of unused and currently using Bluetooth shown on the screen. Once you delete it, try pairing up again and hopefully, it will connect without any issue.

In Android, you can forget a Bluetooth device by going to Settings > Bluetooth and then tap on the Bluetooth name and press the ‘Unpair’ button. For iPhone devices, you can go to Bluetooth settings, tap on the name that you want to remove and then, tap on ‘Forget This Device’ when prompted. Once you have done it, try to toggle the Bluetooth, make it discoverable, scan for available networks, and then pair with the device you wish.

As said, Bluetooth works with a hardware and a driver software. Speaking specifically about the software, if it is outdated or has become corrupt, it will induce errors when you try to use it. In the era when you have an obstructed access to the internet, you can download pretty much everything. For a change, download the right driver for your device from the internet and install it. Try pairing the device with another Bluetooth device when you have successfully updated the driver.

Likewise stated in the previous method, this goes for the firmware installed on your device too. Check out what version your firmware is currently installed and then, check out for new available updates. If yes, download it and install it on your device. Even if you are using a custom ROM, the updates are frequently updated by their developers too. Updating the firmware eradicates bugs and errors in your current firmware as well as gives you more accessibility over the device.

Wifi routers can transmit signals far away, however, Bluetooth signals are short and can travel only a few feet before vanishing into the air. If you are trying to connect two devices and a wall is between them, chances are it will surely pose a problem when pairing it. It is not just about a concrete wall but any other object that comes between these short-range signals can obstruct its strength.

Now that is not the only type of interference that can introduce pairing problems. If there is an active crowded wifi network around the place where you are trying to connect to a Bluetooth device, it will show errors since the wifi has inhibited a maximum portion of the electromagnetic spectrum.