One of the biggest problems with electronics like a smartphone is water damaged smartphone is something you should avoid getting into. Ever wondered what you could and couldn’t do in case if you accidentally or deliberately, intentionally dropped your phone in a sink, pool, on the beach near the water, or spill a bottle of water, glass of water or any other liquid on the device? It’s really a big question I asked but isn’t some part of this question if not all is something you did or occurred or just thought? Well, we have your answer right here. Here’s a guide on how to fix Highscreen water damaged smartphone and what to avoid whilst doing it because it might spike the impact if you don’t bother going through the “don’ts”. 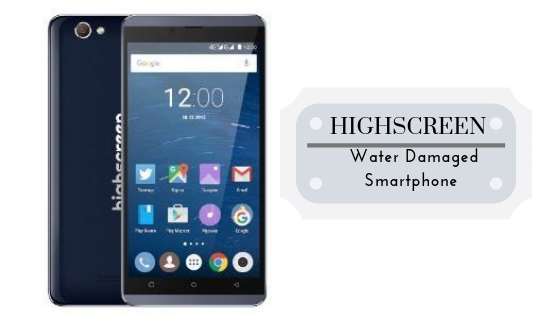 Before we can actually commence with what are you supposed to do, let’s back it up a bit and see what you shouldn’t do.

What are the things you should avoid?

Starting with the most obvious, do not panic because doing so will escalate your reaction time and when you are talking about water damaged smartphone and water, it is not a good idea. Next, do not press buttons on the device and neither press or dab on other other exterior parts. You shouldn’t heat up the device using an air blower or shake it since doing all these will actually impact the device more than you can imagine. Lastly, no need to put your phone onto charging as well.

How to fix a water damaged smartphone?

Here’s a step by step procedure you can follow towards fixing the phone.

If you have read the “Don’ts”, you know that you shouldn’t panic and take the phone out and away from the water right away. Note that the more you keep water in contact with your device, the more damage it creates.

Now, keep it on a dry surface and remove the memory card, SIM card(s), phone case or cover, back panel and battery (if removable). This will allow you to wipe off all these accessories trying to reduce the impact of any left-out water that might damage the phone further in neglected.

Assuming that you have followed the previous steps, let’s move to the next step. It requires a vacuum cleaner that will suck off any traces of water if pointing towards the orifices, openings such as headphone job, memory card slot, SIM card slot, mic, speaker grille, etc. Note that you must be cautious when pointing the vacuum hose near mic and speaker.

After the recommended days of keeping the phone in a ziplock bag, you can remove it but don’t turn it on just now. After removing the phone, press the power button once to turn it on. The phone will vibrate and turn on if everything is okay but if it vibrates but doesn’t turn on, it does mean there are a number of possibilities. First, the battery might be completely drained out causing the phone to vibrate but not turn on upon press the power button. To eliminate this possibility, simply plug in the phone to a charger and that must work fine. However, if it doesn’t turn on after several repeated attempts, it means that either an important component has gone haywire due to coming in contact with water or the display is gone.

This particular alternative is not applicable to all since it requires prior knowledge about dismantling a device, using rubbing alcohol smeared on a paper towel or cotton and dabbed all over the device inside-out to buff it free of any traces of water or moisture, corrosion, debris, etc.

If no method what you do but the phone isn’t turning on, then it is time to bring in the big gun. I am talking about visiting a nearby authorized, partnered or third-party service center as per your preference to get the phone fixed if plausible. Since it is water damaged, it has already nullified its warranty if it was without any water resistance certification.

Are there any preventive measures you should?

There are plenty of ways you can be assured that your phone doesn’t have to put up with the same fate again. First up, you can either buy a new phone with certified water resistance or at least it has non-certified water resistance. Next, you can pick up a waterproof case for your current smartphone that will eradicate the chances of it mingling with water which is something you should do always. Lastly, keep the phone away from the water at all times if it doesn’t have an official water resistance certification such as IP57 or IP68, etc.