Vivo is a Chinese smartphone manufacturer which has established a strong following in may smartphone markets like in India, China and others. No doubt Vivo smartphones provide a premium feel and user experience coupled with its high-end specifications that run under the hood giving an extraordinary edge over other phones in the same price range. However, Vivo smartphones have their backlogs like restarting and freezing problem which has become common since many users tend to report issues on forums, websites, etc. But at the end of the day, Vivo smartphones are electronic devices similar to any other smartphone brand with its share of problems and it doesn’t mean there is no fix available for it. 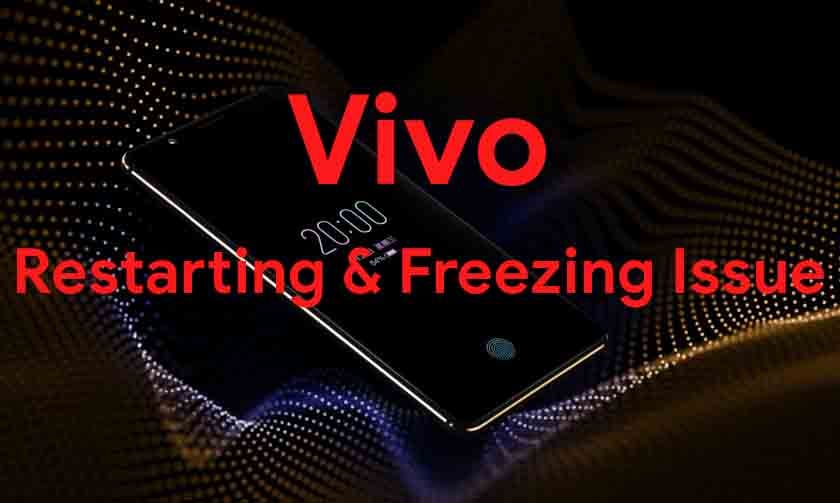 Vivo smartphones have been suffering from restarting and freezing problem for a long time now. Although it is common in majority of scenarios, there are few cases where it can prove fatal the device since, abrupt freezing and restart constantly can damage the internal components such as the CPU, GPU and others which will burn a huge in your pocket if you do not take care of the problem when it was a little one. If you want to take measures to avoid and prevent restarting and freezing problem, here are few tips that you can exercise and get it fixed right away.

How To Fix Vivo Restarting And Freezing Problem?

Press the Power Button
It is not difficult to understand. So assume that you were using the phone or playing a game on it, watching a video and suddenly the app crashed. Okay, so the phone can either shut the app or freeze. It most cases, it won’t respond to touches and would become responsive. What do you do? It’s simple, you press the power button and shut off the phone. What this does it quick extraordinary. It actually suppresses and kills all the apps and services in use and clear the memory being hoarded by a bunch of apps that are running in the background. Once you press the power button, it will close all the apps, free up the memory in use, clear cache memory which is a major cause of restarting and freezing problem.

If not, do Force Reboot
The above method was in the assumption that your phone frozen but it allows you to turn it off by pressing the power button. There is a scenario when the phone crashes and doesn’t allow you to reboot it after pressing the power button. That is when forced reboot is introduced. Although it does the same thing as a normal reboot, it works even when the phone is frozen and won’t respond at all.

Diagnose the device in safe mode
Safe mode is a bootable partition where users and developers can enter to take various diagnostic measures. So safe mode is actually a mode where you can try apps that might be the culprit of constant freezing and restarting issue. What happens while you are in safe mode is that it disables all the third-party apps and services that you have downloaded. When you are in this mode, only the apps which are factory installed will be visible that will help you gauge if the problem is with built-in apps or third-party apps. So, how would you analyze it? Remember that safe mode disables third-party apps that mean if the problem is with any built-in app, the phone will freeze even when in the safe mode. However, in case if there is a problem with any of the third-party, the phone will crash and that now knows that the latter batch is the culprit.
What’s next? Go to ‘Settings > Apps or Application Manager’ and try to uninstall third-party apps one-by-one. This will enable you to detect which app is making more sound i.e. errors. Following are the steps on how to go to the safe mode on your Vivo smartphone and the procedure for any other smartphone brand would be much similar to it.

Force stop apps
Freezing and restarting problem is directly associated with the memory shortage and the excess processes running on the phone that cause overloading and finally, the phone becomes redundantly unresponsive. Forcing apps to stop is an effective practice since it literally puts a stop sign for the apps and forced to shut down its processes right away. When the user stops an app, it frees up hoarded resources that would otherwise be used by these apps and services causing a shortage in apps that actually need those resources.

Note that there are many processes currently running on your system that includes third-party apps as well as built-in services or thread of the operating system. So, ensure that you only stop apps that are downloaded and not pre-installed.

Uninstall dormant apps
Apps are useful but it doesn’t go for all the apps. Remember an app that you used to use a year ago and no longer need it but it is still installed. Even after you are not using this app, it is still taking a physical space on your hard drive as well as RAM that means it is using up resources even after it is unused. This leads to overloading of processes as well as a shortage of resources that puts the system under greater stress. The solution is to uninstall these dormant apps that you no longer need. It can be a downloaded app or a bloatware where the latter requires root permission.
Uninstalling downloaded apps makes available additional resources for the system to operate thus making it more efficient and less stress.

Uninstall launchers
Installing launchers in your android phone is one of its impressive feature since it changes the appearance of the phone completely. However, third-party launchers are notoriously known for causing errors such as freezing and restarting problem when the user puts a stress on it and it overloads while processing the commands given by the users. Although normally the phone would show a popup of error that the launcher isn’t working, however, it would not take long for the phone to freeze if you keep using the same launchers. The best way to fix freezing issue caused due to the launcher is to remove one from your phone.
Although built-in launchers have the same aesthetic look, these apps are fully optimized to handle processes and that is why these launchers work seamlessly unlike third-party launchers that would start freezing within a day or two.

Wipe cache memory of apps & phone
As I have earlier mentioned that cache memory is the biggest problem that causes issues like freezing and restarting behavior, it must be eradicated from the apps regularly. Depending upon the usage, more than 300MB to 1GB of the cache memory can be stored each day which requires disposal. This is where this method comes into play.

Wipe cache partition
This is the continuation of the previous method where you cleared cache from the phone. In this method, you will clear the cache partition in your smartphone which is an effective method by comparison to other methods. You’ll have to go to the recovery mode to complete the task. Here are the steps for it.

Update the device software
Software updates fix minor software glitches and bugs that come in the way of an outdated software. A number of users have stated that they observe freezing issue due to not updating their software and thus, this method is here on this list. Simply go to ‘Settings > About Phone > Software Updates’ and check for the available updates and patches. Installing the latest firmware will fix such minor issues hopefully.

Backup & Reset
Reset is a supreme feature available on all smartphones that enables the users and developers to retract the phone into its original factory settings. In case if you are having software glitches or any problem due to accumulated of cache or overloading, performance issues such as screen flickering, screen freezing, etc, resetting the phone is the sole efficient method to fix all the issues assuming that there is no physical damage to the handset.
There are actually two methods available to reset the phone where first is by using volume rocker and power key and another is using the built-in function of backup and reset.
Factory Reset Using Reset Function

Factory Reset Using Hardware Keys
Now, press the power button to turn off the phone and then, press it again along with the Volume up button for few seconds.

Get help from technicians
We understand that many of the users aren’t rocket science and won’t risk removing the internal components to evaluate the problem (it’s just a joke). Getting help from technicians is imperative if you tend to use this phone but can’t get rid of restarting and freezing issue even after undergoing all the methods mentioned above, although it’s unlikely.  So, get help from an authorized Vivo service center who will evaluate if the phone is having any software or hardware related issues or not and if it needs repairs or replacements, etc. Most of all, getting the fix for the phone from service center ensures it is working properly now. It also gives you an edge since that at least you can turn towards them again in case if persists without worrying for the integrity of the warranty period.