OLED Displays are the best displays available in the market. They are at the top of the evolution of displays and boy, they look great. The quality, the experience, and the detail that we get on OLED Panels are just breathtaking. You get high contrast, detailed sharpness, bright colors and moreover, brilliant true and natural composition. OLED displays are also used in smartphones and it is no wonder that because of these displays, the device has such brilliant image and color reproduction on their displays.

However, there were reports that Google Pixel 2, that also uses an OLED display panel, suffered burn-in in its OLED display panel. Now, this burn-in problem is also seen with OLED TV panels. But, do not worry about it if you have recently purchased an OLED TV or planning to buy one because with proper care and fixes you can avoid this burn-in problem. In this article, we will show you how to set your OLED TV correctly and avoid TV burn-in problem. So, without further ado, let us get straight into the article; 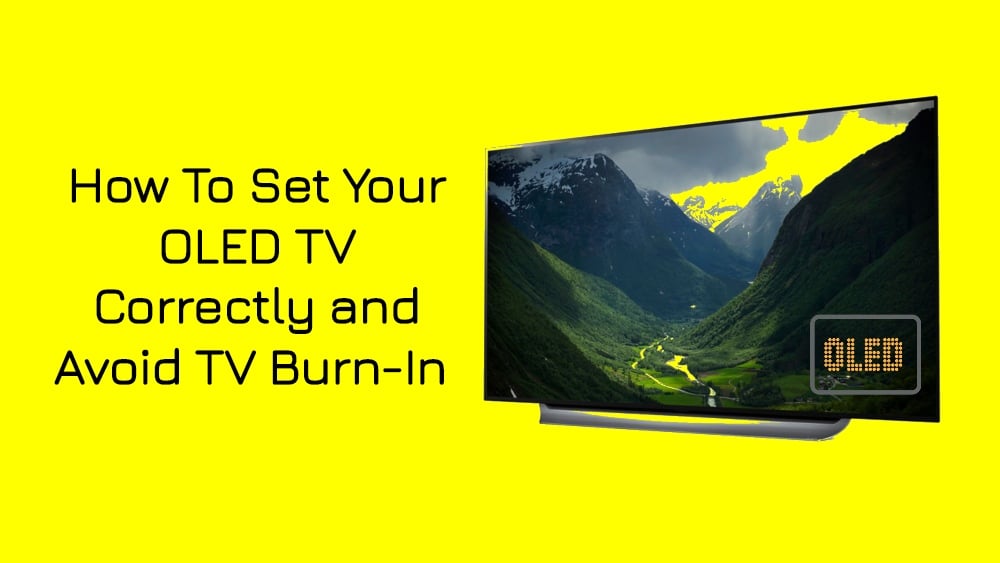 What is an OLED Display?

Now, before we head straight into the cure of the problem, it is better to know and understand the cause of it and its origin. OLED displays are the best displays that we have got now in the market and they are been extensively used everywhere. Now according to Wikipedia;

An organic light-emitting diode (OLED) is a light-emitting diode (LED) in which the emissive electroluminescent layer is a film of organic compound that emits light in response to an electric current. This organic layer is situated between two electrodes; typically, at least one of these electrodes is transparent. OLEDs are used to create digital displays in devices such as television screens, computer monitors, portable systems such as smartphones, handheld game consoles, and PDAs. A major area of research is the development of white OLED devices for use in solid-state lighting applications

An OLED display works without a backlight because it emits visible light. Thus, it can display deep black levels and can be thinner and lighter than a liquid crystal display (LCD). In low ambient light conditions (such as a dark room), an OLED screen can achieve a higher contrast ratio than an LCD, regardless of whether the LCD uses cold cathode fluorescent lamps or an LED backlight.

What Causes the Burn-In Issue in OLED?

Burn-in refers to permanent image retention usually caused by leaving a static image on the screen for a long period of time. The images are “burnt-in” and are visible, like stains, when playing other content. This means that when you switch onto the next content, you could still see the images left behind from the previous content that you were watching. Moreover, screen or image retention can be severe and can last up to months and years if it is not treated properly.

Burn-in and image retention are possible on virtually any display. However, with an LG OLED TV, any risk of burn-in or image retention have been addressed through the use of technology that not only helps protect against damage to the screen but features self-healing properties so that any short-term image retention that may occur is quickly rectified.

LG OLED TVs come with special features and settings to preserve image quality and prevent burn-in and image retention. First, there is a Screen Saver feature that will turn on automatically if the TV detects that a static image is displayed on the screen after approximately two minutes. There are also three options (available in Menu setting > Picture settings > OLED panel settings) that can be used to preserve image quality.

There is not much solely discussed regarding the burn-in problems in the Panasonic OLED TVs. But, after researching, I found out that yes there are people who have suffered from burn-in on their Panasonic OLED TVs. However, the company has also included one feature that can help you to prevent the burn-in problem in your device. It is known as the Pixel Orbiter setting. You can find this feature in the screen settings, the “Pixel Orbiter” prevents the burn-in effects, whereas the “Screen Maintenance” deletes any traces.

Now, there is a detailed guide on what is image retention or the burn-in issue and what causes it and its solutions, etc which is very briefly described in the official website of Sony. But, to cut things short here is the method and fixes that you can apply on the Sony Bravia OLED TVs to prevent burn-in problems;

Pixel shift is a function on your OLED TV that shifts the image after a certain amount of time to prevent image retention on the screen in order to prolong the life of the display panel. Follow the steps below to enable the function.

You can read about this burn-in problem in detail on the official website of Sony.

You can read about this issue on the Philips official website. But, there are some methods available on the Philips OLED TV which allows you to tackle such issues and automatically prevent or improve this.

For Other Manufacturer OLED TV

You can always go check out the official website of your OLED TV manufacturer and search for the burn-in problem or image retention issue. Moreover, you can also contact customer care for support and assistance regarding this matter (I know you will get a frustrating response from customer care as the knowledge and detail they possess about this issue will be equal to zero). But, you can try customer care and who knows, you might get lucky solving this problem with their help.

You can also tweak some settings using the manual guide provided with your OLED TV and get rid of the image retention issue on your OLED TV.

So, there you have it from my side in this article. Hope you guys liked this post and by following the above methods or fixes, you were able to overcome this issue if you were facing one. Please let us know in the comments if this post helped you in any way and also, do share with us the fix your OLED TV manufacturer provided you to prevent this issue.