Huawei has a colossal market share for its smartwatches apart from being the third-largest smartphone manufacturer in the world. Of the total 45 million units sold in Q3, 2019, Huawei managed to score 13% of the market share which although is less than what Xiaomi or Apple have reported, but it is still a huge share. However, with the commencement of the year 2020, some things may have turned on the uglier side for the Chinese juggernaut.

On January 2, 2020, several reports from enraged users started popping up regarding sleep data syncing issues with Huawei wearables and the Huawei Health App. The reports were found across various forums including XDA and Reddit.

Fortunately, as soon as the reports about the issue went public, Huawei made it official that the sleep data syncing issue was detected on January 2nd, 2020, and that the Chinese juggernaut has equipped its R&D team to search for the bug and deploy an update to patch it up and continue syncing the data. 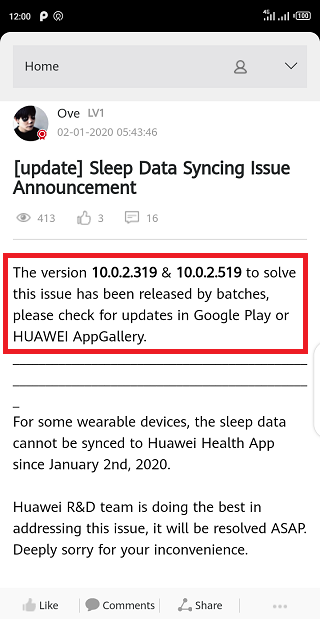 Soon after the statement was made public, Huawei managed to roll out the update for Huawei Health app with version 10.0.2.319 or 10.0.2.519 based on the region you live in. Note that users can check out if they have received the said update via Google Play Store or Huawei App Gallery or they can simply get an APK version to download and install right away.

Since Huawei will be sending over the update via OTA in batches, some of the regions will be receiving the update earlier than others. You can install the update and the app will sync with Huawei wearables restoring any lost data including sleep data from January 2nd or whenever you recorded the problem this year.

If you are looking for the APK version, check it out here → APK Mirror or wait for the OTA update that must arrive soon.