New updates are added on August 13, 2020: Finally, the MIUI 12 Global Beta Stable update is rolling out for the Poco F1 users. Notably, the update is available for the Mi Pilot testers. The update is based on Android 10 and the official post also reminds that if the users have not yet received the update, then they have to wait for the official release of the update. The update is hitting the select Mi Pilot users with version number v12.0.0.3.QEJMIXM. It will be arriving via OTA in batches so, keep an eye on the software update section. For more information, you can go head over here.

New updates are added on August 8, 2020: Another day another sad news for all the Poco F1 or Pocophone F1 users who were waiting for the MIUI 12 update. As per a latest announcement by the Poco F1 Telegram group, the MIUI 12 update has been delayed further. Note that just yesterday we came out with a report that the same Telegram group stated that the update will start in the coming weeks.

But the bugs and glitches present in the current MIUI 12 update does not allow the company to push the update. However, it is expected that the bugs will be fixed in August itself. Here is what the Telegram message about Poco F1 MIUI 12 update reads:

Poco F1: planned to release next week(might get postponed, don’t blame me), due to some bugs and stability issues update has been postponed again and again, hopefully everything will get fixed by August.

New updates are added on August 7, 2020: Previous reports suggested that the Poco F1 or the Pocophone F1 would be getting updated with the MIUI 12 stable update pretty soon. However, new reports have come up stating the update might take more time than expected.

It was expected that the MIUI 12 update for Poco F1 would arrive somewhere in August, but now it seems like it has been pushed by a week or so. In an official Telegram post, Xiaomi has stated that the pilot program for MIUI 12 Poco F1 would most likely be testing the next week.

What’s more frustrating is that the message also adds, that this pilot testing might get delayed in the future again. Besides, the same message also confirms that if the pilot program goes underway as planned, the stable version of the MIUI 12 update will hit the Poco F1 only after the testing ends, which we expect to be 2-3 weeks.

So, nothing is clear as to when the update will arrive on the Poco F1. We will keep you posted about this, once there is any further development in this regard.

Ever since the launch of MIUI 12 happened in April, it has been one of the most talked-about topics for all the Xiaomi smartphone users. Users across all the regions were excited to know when this new featureful MIUI 12 update will arrive on their devices. After releasing an updated roadmap for China, Xiaomi finally came up with the Global update roadmap. To date, a bunch of Xiaomi phones is already running the latest MIUI 12 update, but thanks to the OEM’s presence in multiple regions and a huge portfolio under its belt, Xiaomi is yet to make this custom skin update for a number of phones.

As far as the global MIUI 12 rollout is concerned, officially it started off in June for a list of devices. You can head over here to know about all the Xiaomi phones that have received the stable MIUI 12 ROM, globally. Later on, a new piece of information emerged in the official MI community website, which depicted the Phase 2, 3, and 4 of the MIUI 12 rollout, at least for Chinese phones. Poco F1 which is one of the rocking phones from Xiaomi launched back in 2018, is still waiting to get updated with MIUI 12. Notably, the phone is running on Android 10 meaning that the path is clear for the phone to get MIUI 12 stable update. 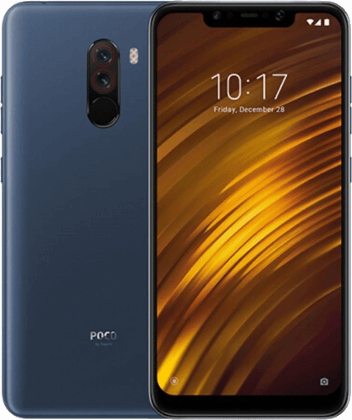 And a piece of good news is now available for Pocophone F1 (Poco F1) MIUI 12 hopefuls, because as per a forum moderator on the official Mi community platform, the stable update might arrive on the phone somewhere in August. Here is what the exact statement of Mi moderator reads:

Well, MIUI 12 will initially launch with Android 10. Even Google haven’t released Android 11 yet – except for Betas. We could expect MIUI 12 by next month (hopefully), since Mi Pilot program has already begun for POCO F1. But as for Android update, we can’t be sure as we have already received the two promised updates (Pie and 10) – so anything that comes out now is gonna be a bonus. Stay tuned. 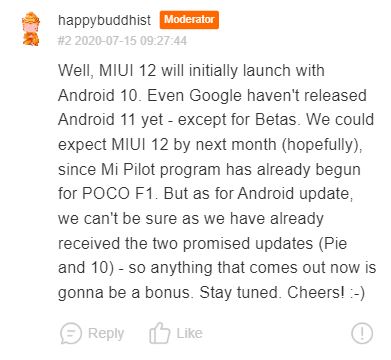 Taking a cue from the above statement, it is still not clear as to when the update will arrive as the moderator also shied away from telling the exact date of Poco F1 (Pocophone F1) MIUI 12 stable update. But, we would be optimistic here and expect the update to be made available for the phone in August. We will keep our eyes glued to any further developments and will report it once it is available to us.