A waterproof smartphone is very important in today’s era as many people are engaging with shower calls, swimming selfies, and underwater photography. Thsi new trend has increased the popularity of waterproof smartphones. So LG has launched its latest device – LG V50 ThinQ with official IP68 water and dust resistant technology. Apart from that, the device is also MIL-STD 810 military grade certified. However, today in this article, we will check whether you can take underwater photos or go swimming with this device in our LG V50 ThinQ waterproof test. 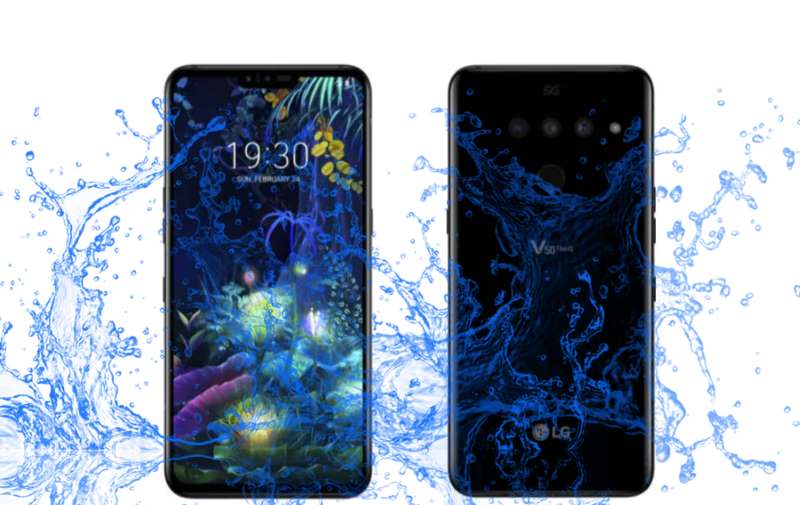 Many smartphone buyers check the waterproof rating of a smartphone before buying the product. A waterproof device can’t get any liquid damage while swimming, in rain or in the shower. This is why the modern generation demands a waterproof smartphone. When it comes to certifications, then LG V50 ThinQ is IP68 certified waterproof. However, we will test this to its extreme in our LG V50 ThinQ waterproof test. But before that, have a look at device specifications.

There are a couple of tests we can perform to find whether how long LG V50 ThinQ will survive under water. Usually, a waterproof smartphone can hold up to 30 minutes while submerged into water. However, we will test this to its mark in our LG V50 ThinQ waterproof test.

In this test, we are going to put the device in water for 30 seconds. After that, we will test whether the device has got any damage or not.

After performing the quick immersion test we didn’t find any signs of damage on the device. Since the device is IP68 certified, it’s great that the device can withstand underwater for 30 seconds.

After testing LG V50 ThinQ in artificial rain condition, we came to know that there are no complications in the device. Also, the user can easily make or receive calls during a shower or rainy environments.

In this test, we are going to immerse the device with a bucket full of water for 30 minutes and will see whether it survives this or not.

After water immersion test, we came to now that the device holds perfectly fine under such conditions. This means that you can also do underwater photography with this device.

After the dustproof test, no dust was found in the internal parts fo the device. This shows that indeed LG V50 ThinQ is dustproof.

LG V50 ThinQ is an amazing device with waterproof and dustproof capabilities. Apart from that, it also comes with military grade protection. So you don’t need to worry about little bumps or dumps. You can use this device underwater to take beautiful shots or can talk with your loved ones while it’s raining. LG V50 ThinQ comes with official IP68 waterproof ratings. So you don’t have to worry about getting your device damaged by water.