Nokia X6 Waterproof test: Nokia used to be one of the biggest feature phone manufacturers in the world. However, they quit a long time ago, but now they are planning a huge comeback. Nokia just launched their new Android smartphone Nokia X6 in may 2018. This device comes with a 5.8-inch wide touchscreen display with an amazing resolution of 1080 by 2280 pixels. As Nokia was known for their long-lived, durable phones, so customers want to know whether Nokia X6 is waterproof enough to buy in 2018. So without a further do, let us check it out. 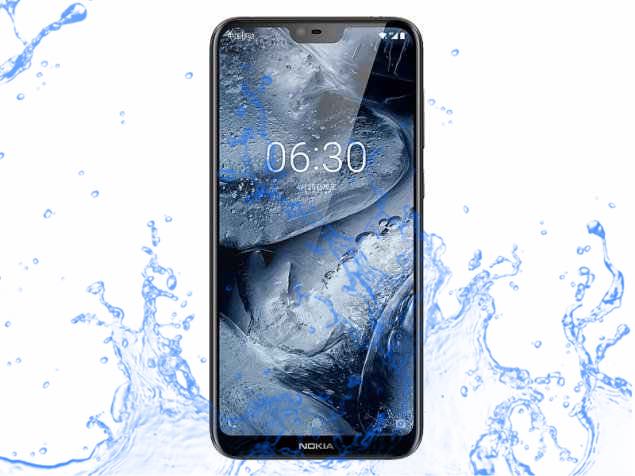 Nokia X6 is dual sim smartphone by our beloved company Nokia. It is powered by octa-core processor, and it is packing 4GB of RAM with 32 GB of internal storage. However, there is nowhere mentioning of official IP68 rating of this smartphone. So people are curious whether Nokia X6 is waterproof or not. Considering Nokia pasts, they always tried to make their phones durable. So it is pretty usual to think the same when judging New Nokia X6. But is it true? Let’s check it out!

When Nokia X6 is subjected to water droplets, the device starts to behave abnormally. It stops responding to touches and starts opening random apps and triggers various quick settings automatically. This is a primary hint that this device is not waterproof. But we will test it to its full extent. Few more water droplets are subjected on the device which seems to make the conditions even worse. Later on, we cleaned the device with a microfiber cloth, and it came back to its original condition. It seems like this device does not have good relationships with water. Moving on to our next test.

Another test which reveals the waterproof capabilities of a smartphone is the washing test. In this test, we are going to wash Nokia X6 in water for approx 1 minute. Later on, we will inspect the device for any water damage.

When Nokia X6 is subjected to water in washing test, it becomes non-responsive to touch inputs. This indicates that the touchscreen does not have any waterproof coating over it. moreover, this triggers many ghost inputs, and the device starts behaving randomly. This makes it impossible to operate the device in moisture or slightly water environments. So it becomes impossible to take pictures or to accept calls under showering conditions.

In this test, we try to check whether the water will go inside the device or not. Most smartphones come with a waterproof coating over their I/O ports. After I/O ports water test, it appears that Nokia has done nothing in this department. The water goes through the speaker, screen, earpiece, and buttons as well. The charging point also seems to malfunctions due to severe water damage. This indicates that this device is not going to withstand any water damage.

When Nokia is subjected to water immersion test, water droplets were observed from I/O ports and from areas near the screen. This means that the device is not completely sealed from inside and does allow water droplets to pierce through. So it turns out that Nokia’s latest flagship Nokia X6 is not waterproof at all. So customers are requested to take note not to use this device in moisture environments as it is going to get water damage pretty easily.