After breaking up with Ericson, Sony found a new lease of life after introducing its Xperia lineup ranging from devices in the high-end premium category to low-end budget category and much more. Sony Xperia currently has a wide range of smartphones in the variety of genres although it has suffered from decreasing sales with a recent report suggesting that the smartphone giant has only 1% market share when compared to the overall sales.

Similar to a majority of smartphone brands, Sony hasn’t yet revealed the list of Android Q Supported Sony Xperia Devices. Thus, here’s what we could decipher based on the eligibility and other factors that could impart an idea of which smartphones could and couldn’t get the update although there could be changes in lieu of an original list of smartphones that Sony will release soon. 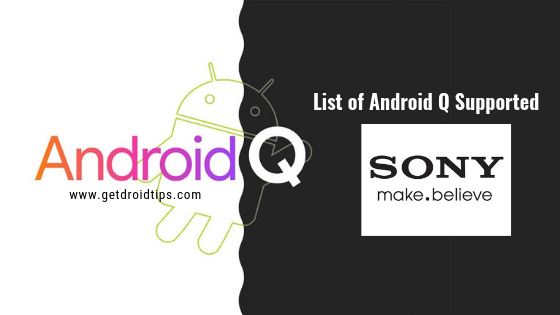 Android 10 is the tenth iteration of the popular Android OS which when combined, has more than 1BN smartphones spread across different specs sheet and price ranges. Android 10 is the latest and will bring more features upon the last released Android Pie such as it will support 5G smartphones, foldable displays, and will feature a new permission-based system that will require users to check out permissions being asked and grant if needed which eliminates apps using any permission by themselves.

Next up, we have improved navigation-based gestures and of course, a fully revamped UI which includes new icons and a system-wide Dark Mode to name a few. Android 10 will also feature a Live Caption feature that transcribes videos on multiple supported video streaming apps. Google introduced Android 10 on September 3rd officially and since has started rolling out on Pixels and Essential Phones while phones listed under Project Treble will be the first to get their hands on the update accordingly followed by other smartphones throughout the year.

Dark Mode: One of the most awaited features on the OS is the Dark Mode. It changes the theme which is healthy for the battery and keeps it going for longer while pulling the excess strain that bright light puts on the eyes especially during the night.

Security Updates: This one for the users. Unlike other Android OSes, the Project Mainline that comes with Android 10 promises easier, faster delivery of security updates and not via OTA but it will be via Google Play Store. This will eliminate the middleman & reduce the time it takes for monthly security updates & bug fixes to reach the users.

Gesture Navigation System: Welcome the new swiping gesture-based navigation system. It uses your finger movements to do stuff such as going backward in an app or any other service you are using. Slide the slider at the bottom to drive between the apps or pull it slightly up to visit the Home screen.

Sound Amplifier: The built-in feature reduces the background noise when you are using wired headphones with or without noise-canceling feature. It increases the sound while decreasing the noise & provides a Visualizer so you can tweak it a bit.

Focus Mode: An excellent execution on Android 10 is the Focus Mode that sits within Settings >> Digital Wellbeing. It puts manually ‘selected’ apps in a zone where they won’t buzz or go off as they would so that you can complete doing what you wanted without any distraction.

Presenting the Sony Xperia XZ3, the only smartphone from Sony to be listed under Google’s Project Treble which means it has already received a number of Android 10 beta and will get the Android 10 stable version soon after it releases for sure. Xperia XZ3 was launched last year with SDM845 + Adreno 630 chipset and a 4GB RAM onboard with 64GB internal storage.
Status: Eligible (Already received Android 10 beta)
Date: To Be Announced (Estimated – Q4, 2019 or Q1, 2020)

Xperia Ace sports a mid-range Snapdragon 630 chipset with Adreno 508, 4GB RAM and 64GB internal storage onboard. The device has a 5-inch IPS display with a small 2,700 mAh battery and a dual rear camera setup. The device runs on Android 9.0 Pie out-of-the-box which means it is likely to get Android 10 although we mention that it isn’t officially committed yet.
Status: It is likely to get Android 10
Date: To Be Announced

Next in the series is Xperia L3 which has a 5.7-inch display and it is a mid-range phone running on MediaTek Helio P22 octa-core processor paired with 3GB RAM and 32GB internal storage as well. Since the device was launched this year, we could say it might get Android 10 update although even if it does, it wouldn’t be so early i.e. sometime in 2020.
Status: It could get the Android 10*
Date: To Be Announced

Another device from Sony i.e. Xperia 10 Plus that was introduced this year has a mid-range specs sheet with 4GB RAM and 64GB ROM onboard along with Snapdragon 636 octa-core and Adreno 509 GPU mounted on its chipset. Since the phone is introduced this year, it is also in tow to get Android 10 although it is not a commitment but a rather predictive based on its release date and specifications.
Status: It is likely to get Android 10
Date: To Be Announced

The next is Sony Xperia 1 and it does have some impressive specs to list. It runs on Snapdragon 855 octa-core processor with 6GB RAM and a 128GB internal storage. The device with its 6.5-inch P-OLED display runs on a 3,300 mAh Li-Po battery with Android Pie 9.0 handling it as its OS. Since Xperia 1 is undoubtedly a flagship phone, it is no doubt that it will get Android 10 for sure.
Status: It will get Android 10 update
Date: To Be Announced [Estimated – Q1, 2020]

This handset was launched under the flagship category by Sony brand in October 2019. It has a 6.1-inches OLED display with the Corning Gorilla Glass 6 protection and also offers HDR BT.2020, Triluminos display, X-Reality Engine features. It’s powered by the Snapdragon 855 SoC, 6GB RAM, 128GB internal storage (expandable up to 1TB via hybrid slot), a triple 12MP rear camera setup, and a single 8MP selfie camera on the front.

Xperia 10 is the last phone in this list to be released in 2019. Introduced with a 6-inch IPS 1080 x 2520 pixels resolution display, the device runs on Android Pie 9.0 and feature SDM630 SoC on top of 3GB RAM and 64GB ROM. It could get an Android 10 update although this list could change since there’s no official list of Android 10 supported Sony Xperia devices available yet.
Status: It is likely to get Android 10 update
Date: To Be Announced

Xperia XA2 Plus is a mid-range device that packs in a Snapdragon 630 octa-core processor bundled with 4/6GB RAM and 32/64GB internal storage. The device comes with a 6-inch display with 3,580 mAh Li-Po battery and runs on Android 8.0 Oreo out-of-the-box. This means it is likely to get Android 10 although we don’t commit to it as of now.
Status: It could get Android 10 update
Date: To Be Announced

Xperia XZ2 Premium is a flagship smartphone with 6GB RAM, Snapdragon 845 SoC with 64GB built-in storage. Although it was introduced with Android 8.0 Oreo, it is no doubt that it will be bumped to Android 10 citing its specs sheet which is impressive.
Status: It is likely to get Android 10 update
Date: To Be Announced

The compact version of XZ2 features a 5-inch display with the high-end Snapdragon 845 SoC that was the fastest in 2018. It has a 4GB/6GB RAM options with 64GB internal storage and runs on Android 8.0 Oreo. The device is likely to get Android 10 update as well since it is a flagship phone.
Status: It is likely to get Android 10 update
Date: To Be Announced

The standard Xperia XZ2 features 5.7 in IPS display with a 1080 x 2160 pixels resolution. The device holds 3,180 mAh battery and runs on Android 8.0 Oreo. Since those running on Oreo are likely to get bumped to Android Pie, Xperia XZ2 could get the update as well.
Status: It could get the Android 10*
Date: To Be Announced

The Xperia XA2 Ultra features a 6” IPS display with SDM630 and Adreno 508 GPU. The device was originally launched with Android Oreo 8.0 out-of-the-box which hints that it could get Android 10 although we aren’t sure until an official list is published by the smartphone maker as early as next month.
Status: It could get Android 10
Date: To Be Announced

What to do if your device is not Android 10 Supported?

Unless your Sony Xperia smartphone is attuned to get Android 10, you are left in peril as you wouldn’t be able to get the update. The eligibility criteria is your device must be within two years of its original release running the latest OS while it must run on competent specifications released as the prerequisite to update the device to the latest OS which means, majority of devices launched within the last two years of major support period is also cut off from getting the update.

This leaves a very small number of smartphones to get Android 10 but here’s a way you can use a custom variant of Android 10. Apart from the stock Android os customized Android (via your OEM), there are plenty of custom ROMs available on the internet that allows users to get extended security patches while tweaking the device to get a revamped UI and introduction of a variety of features and more. LineageOS is currently developing LineageOS 17 which is an Android 10-based OS. It will support a much larger number of Sony Xperia smartphones than stock Android.

You can actually check out the official list of supported Sony Xperia devices that will be out in a jiffy. You can check out other custom ROMs available such as Resurrection Remix OS, Paranoid OS, Pixel Experience, Havoc OS, etc. We hope this answers any queries you might have or you can ask us on GetDroidTips and we will answer ‘em all. Also, this list of tentative and not an official one since Sony hasn’t propagated such a list of Android 10 Supported devices yet so you will have to take it with a pinch of salt as well.