Lenovo was founded on November 1, 1984, in Beijing, China by Liu Chuanzhi. The Lenovo Group Limited which is shortened to Lenovo sells a wide range of products such as tablet computers, smartphones, computers, servers, etc. Lenovo started manufacturing smartphones in 2012 and introduced phones with Android OS since 2013 and has catered a number of series such as S-series, A-series, K-series, Z-series, and more. It recently introduced its first-ever 5G smartphone named as Lenovo Z6 Pro 5G.

Basically, when it comes to mobiles, Android and iOS are the undisputed leaders with more than 1bn units each. Android was introduced 10 years ago and Google (parent company) is currently testing out the next iteration of the OS and that’s Android 10 Q. This version has a string of features on-board that were either improved from the last version or introduced as a whole new taking inspiration for Apple iOS 13 and of course, user suggestions and feedback. 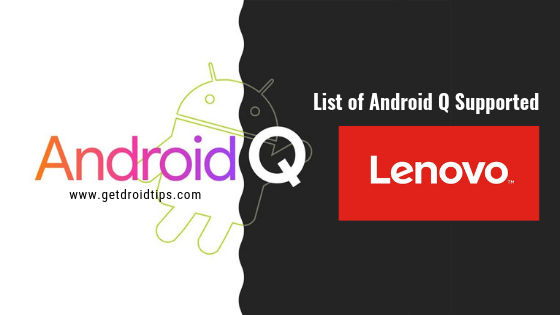 The latest OS will be officially named as Android 10 after its release on September 3rd which squashed certain suggestions such as Quiche, Quesadilla, Quince, Quintim, and a bunch of others that mushroomed on the web. Google will skip the universally obstructed dessert nomenclature. Henceforth, Google will continue naming its upcoming Android OSes with numbers starting with Android Q as Android 10, Android R as Android 11 and so on.

Apparently, Android 10 is jam-packed with a tonne of features such as Live Captions, support to foldable devices with different form factors, support to 5G networks and a native system-wide dark mode. Apart from this, Android 10 also has an enhanced permission-based system in order to prevent apps from collecting unwanted data from the system as well as blocking any unauthorized access or so.

Dark Mode: You might have seen apps opting to go dark for a couple of months now. Well, Android 10 now brings it as a system-wide feature with all Google apps compatible with it while there are copious third-party apps that have integrated this feature that saves both battery life and the excessive strain that bright light puts on the eyes.

Gesture Navigation: No matter how contentious it may be, Google didn’t fail to make a slam dunk with the new Gesture-based Navigation where the phone uses edges of the display to carry stuff like bottom edge can be used to proceed to the Home screen or toggle between apps or you can use the left & right edges to go backward.

Smart Reply: It was already in works on Gmail but Android 10 officially welcomed the feature across all messaging apps. With the feature active on Android 10, users will get suggestions of what they could reply based on the context of the email or message. Smart Reply reduces the time it takes to punch in the response. Also, you’ll need an action button if the received message contains any actionable stuff like a video or site link or location, etc.

Privacy Controls: The Android 10 brings stringent privacy controls on-board such as now you can access an option that goes with the same name within Settings that’ll contain everything from permissions to personal data, web and app activities, and more.

Sound Amplifier: Works with wired headphones at the moment, the feature reduces background noises and adds bass to the sound to create a mind-boggling experience.

Focus Mode: Got a “distractive app” that buzzes off every minute or the notifications goes off whenever you are trying to do something? Focus Mode is at your rescue as it wouldn’t take a second to simply list that particular app into the Focus Mode where it will temporarily stop the app until you take it out.

Security Updates: One of the best features that have rolled out with Android 10 is the ease of updating the system with the latest security patch which releases monthly. Google will push out these monthly releases via Google Play Store thus, eliminating the middleman i.e. either the OEM or the carrier and therefore, it will effectively lower the time it takes for updates to reach the phones.

List of Lenovo Devices That Aren’t Eligible For Android 10?

These are the smartphones that aren’t supported by Lenovo and thus, it won’t get an Android 10 for sure. Note that there could be an exception since one or more smartphones/tablets could get the update.

Why doesn’t my phone supports Android 10?

There are many layers that define if any smartphone will receive an update or not. First up, Google develops a new Android version which has minimum requirements that the phone must carry in order to support the new OS. Usually, Google supports smartphones for two years from its original release date where they could receive up to two major upgrades although it could vary.

On the other hand, the OEM’s end is rather complex. Google sends out Android updates to its Pixel devices directly which means it won’t take even a day to resonate on these devices including Essential Phones. However, Google sends out stock Android updates to OEMs that can either release the update as stock or they can customize it by applying their own skin which is a lengthy process in its own senses. Also, smartphone makers usually release a number of phones in a year which means, it is not practical for the OEM to simply support all the phones with major updates. Thus, they would restrict updating only a handful of devices for a maximum of two years which depends on the release date, specifications, and other variables.

You need to check out the above mentioned list and keep this above-given definition to understand if your phone supports Android 10 at all.

What could I do in case my phone doesn’t support any further updates?

As you have already read, you can deduce if your phone could get any further updates or not. Note that those receiving any major Android updates which are not Android 10 isn’t included here. In case your Lenovo smartphone doesn’t support Android 10 or any further updates, if you still want to try the new OS, you can actually buy a new phone or lease or even buy a comparatively new second-hand device which supports further updates.

Apart from this, you can also check out from the various custom ROMs where you need to dive into their list of supported devices if you want to install any custom ROM. This includes Havoc OS, Paranoid Android, Pixel Experience, LineageOS, etc where each custom ROM developers create a new version based on stock Android where it allows users to get constant updates, new features, and UI which keeps the phone safe from any unwanted intruders.