With each region, there are native apex predators to look out for, like giant squids, alligators, and even other sharks. Winning against these predators will earn players additional rewards. Another element to look out for are the bounty hunters. Maneater hosts several bounty hunters who will attack and kill the shark once the players reach a certain level. In this guide, we are going to look at some locations of golden shores in Maneater as well as landmarks, license plates, and caches. But before everything, let’s talk about the game a little.

Maneater is an action RPG released from Tripwire Interactive. It is released across all major gaming platforms like Microsoft Windows, Xbox One, Playstation 4  in May 2020. The Nintendo Switch will receive the game in the latter part of 2020. The game is set in an open world and features a female bull shark that exacts revenge on a shark hunter. Played in a third-person perspective, players assume the role of a blood-thirsty bull shark that explores the seven regions of the open-world and complete the missions. The shark is equipped with a few attack modes and can charge and whip at enemies. It can even use the surrounding to its advantage, like using a swordfish as a spear. Pretty neat huh? Additionally, the shark can also wreak havoc on humans along the coastline and destroy boats and yachts. Now without any delay let’s get started with our guide.

The players can roam around as the shark and feed off other animals in order to grow. As the game progresses, players will be able to evolve from a baby shark to a complete megalodon. The shark can be upgraded with several advanced abilities like external bone plates and some dangerous electromagnetic spikes.

Golden Shores is one of the maps in Maneater that shows all the collectibles locations. All in all, there are about 35 of them with 8 landmarks, 10 license plates, and 17 caches. Like always, most of them are fairly easy to locate but there are a few that are much harder. Not to worry, that’s what this guide is all about.

Compared to other areas, there are fewer landmarks in Golder Shores. All 8 of them can be seen marked as pins in the map below. 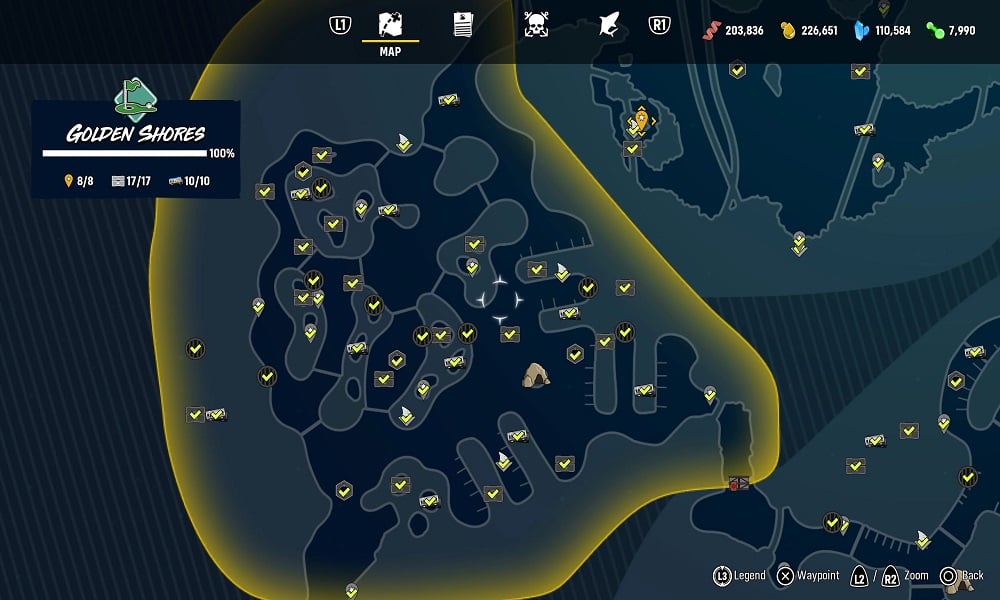 In Golden Shores, there are 10 license plates in total. Each of them requires that the player jump out of the sea and smash them. The license plates are marked with the small license-plate icon on the map.

Remember to keep the angle of approach and speed in mind when smashing the license plates.

Unlike other areas, there are more nutrient caches in Golden Shores. Specifically, there are 17 of them.  The caches are marked with the greyish chest icon in the map and are fairly easy to spot, as they are decked out with red lights.

So there you have it. All you need to know about all the Golden Shores map with its landmarks, license plates, and caches.

GetDroidTips works seamlessly for you people day and night to offer the best iPhone Tips and Tricks, PC tips and tricks, Games and Android Tips and Tricks. So it does become your duty to subscribe to our YouTube Channel. Moreover, there, the benefit is yours. We are offering a $150 giveaway contest for all our subscribers who watches our videos there. Now signing off here, to prepare another best guide for you. Happy Hunting!