Progressing through the level in Minecraft Dungeons, you’ll encounter different bosses and enemies. Each of them that you face will have some kind of a hard battle planned for you. While you can run past some of them, the Nameless One boss just won’t leave you alone. You’ll fight this boss in the Desert Temple Level and a win against this boss is vital.

In this guide today, we’ll take you through the most definitive strategy that’ll help you defeat the Nameless One boss in Minecraft Dungeons. Although the boss is pretty hard to deal with, combining the right strategy with the execution will help you overcome this madness. So without any further ado, let’s look further into the Minecraft Dungeons The Nameless One boss battle guide.

The first thing you need to do is take care of the loadout. So before entering the battle, we suggest you to take with you the loadout that we recommend for this boss fight. These are the Fireworks Arrow, Boots of Swiftness, and Death Cap Mushroom. With these in your loadout, we’ll combine them with quite an effective strategy that will easily bring down The Nameless One Boss.

Having your loadout set, the next thing to do is acknowledge how powerful the Nameless One boss is. Although this boss can be a little hard to defeat, he’s just another average boss if you manage to combine the above loadout with the fighting strategy below. This boss will use three different attacks against you. Our goal is to know what these are, and how to not get damaged as we do the damage.

The first attack of this boss is a ranged fireball attack. With this attack charged, the boss will summon some green spheres against you. The best thing we can do here is to avoid getting hit by these deadly spheres. For this, it’s best that you dodge the spheres, managing not to get damaged. 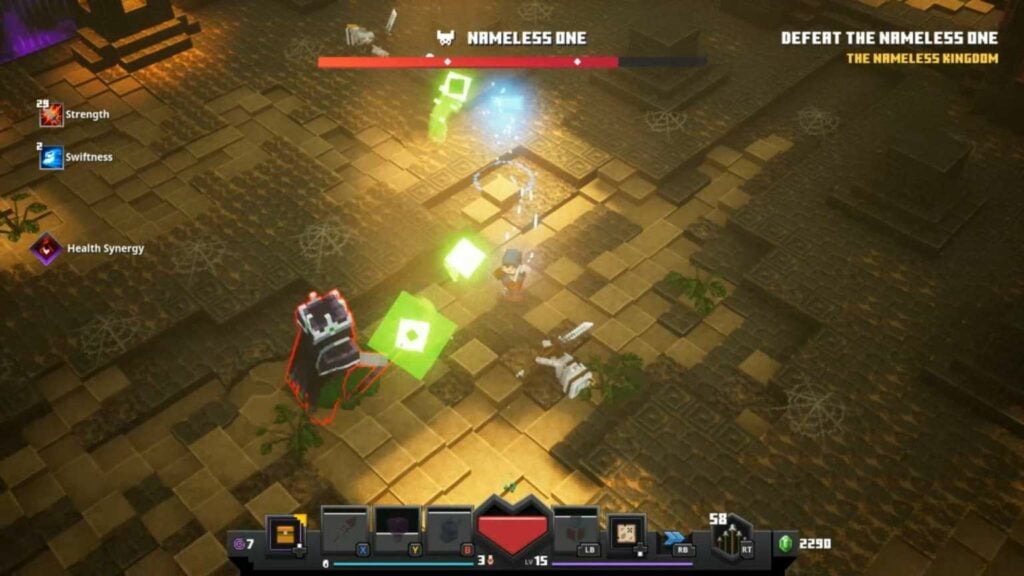 The next attack that this boss has up his sleeves is summoning the skeletons against you. At times, you will find the boss swinging the staff that he holds. This is the preparation for summoning the skeletons and this is a great opportunity for you to strike. As he is swinging the staff, activate your Death Cap Mushroom and strike him as many times you can. The Death Cap Mushroom will deal a larger amount of damage to the boss at this point. Then when the swinging is done and the skeletons rise against you, do some attacks and break their shields. Once they’re vulnerable, lure them into a group and use the Fireworks Arrow to take down multiple enemies at once. 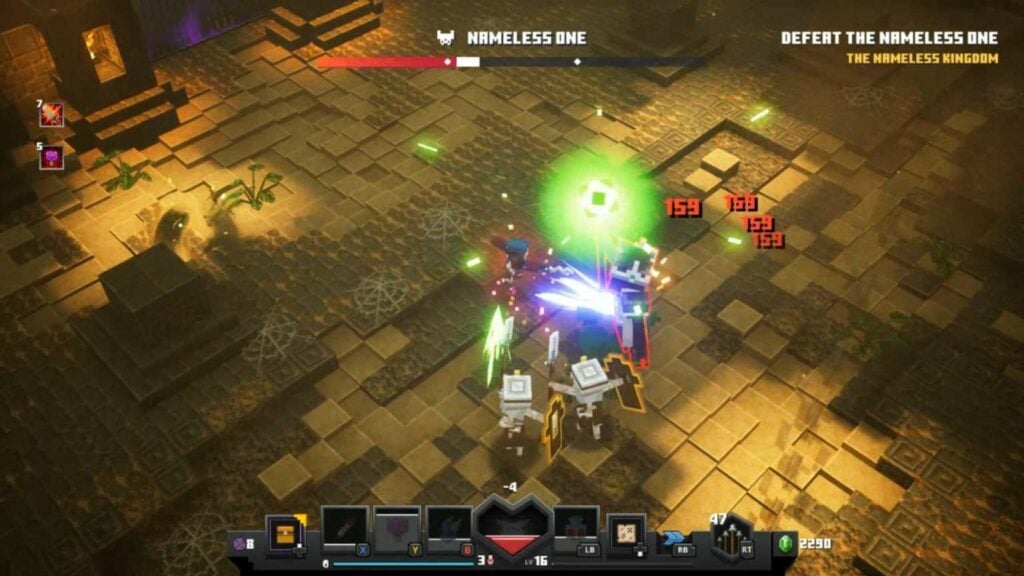 Finally, this boss will summon multiple versions of himself against you. These cloned versions of the boss will circle you down. Right as they surround you, you’ll see all of them casting fireballs at you simultaneously. At this point, you need to make use of your Boots of Swiftness and dodge whatever they cost your way. Keep repeating this process until you manage to kill the boss. It is a bit hard to bring this boss down so we must make sure not to get hurt ourselves in order to stand a chance against him.

Summing up our guide, the best thing you can do is to choose the loadout that we recommend in this guide and then take on the battle. By combining the loadout with the fighting strategy as we went through above in this guide, you’ll be able to stand a chance to win against the Nameless One boss. This is an effective strategy so you sure do not want to pass it away. That said, we hope reading the guide above has brought some valuable information and help to you. Please let us know by commenting down below if you have any further queries regarding the same.