New Update on July 15, 2020: According to the Motorola US official Twitter handle, the Moto G7 is expected to receive the Android 10 update pretty soon. However, there is no specific timeframe available yet due to the pending approval of the partner. So, it can take further time as well. All the interested Moto G7 users should wait for the Android 10 update.

Hi, thanks for reaching out. While we never share timing information, yes, the G7 is expected to receive Android 10, pending partner approval, if that's required. -Erwin

Currently, the update is live in Mexico, Europe, Canada, the UK, Netherlands, Argentina, and more regions. The OTA update is waving in a phased manner and will soon arrive on all the units completely. Now, some of the US Unlocked Moto G7 users have mentioned about the arrival of OTA update recently which is a good sign for the users. The software version is the same QPU30.52-16-2.

Although the firmware update bundled with an outdated April 2020 Android Security Patch Level for the US Unlocked Motorola Moto G7 model. Additionally, it brings all the native Android 10 features and improvements like the dark theme, gestures navigation, improved notification management, privacy enhancements, visible UI changes, and others.

Just got the update in the US West. from MotoG

The Motorola Moto G7 came with Android 9 Pie out of the box and a decent mid-ranger that houses the Snapdragon 632 chipset coupled with 4 GB of RAM and a 3000 mAh battery. The Android 10 update will be the device’s first major OS update. As far as all the features are concerned, Android 10 brings dark mode, new gestures, new animations, new icons and fonts, Digital Wellbeing, smart reply, live caption, new parental controls, etc. Notably, the official OTA will be pushed via OTA in batches, however via this post, you will be able to manually upgrade your Motorola Moto G7 with the latest Android 10 update, as we will provide you with the download link as well. 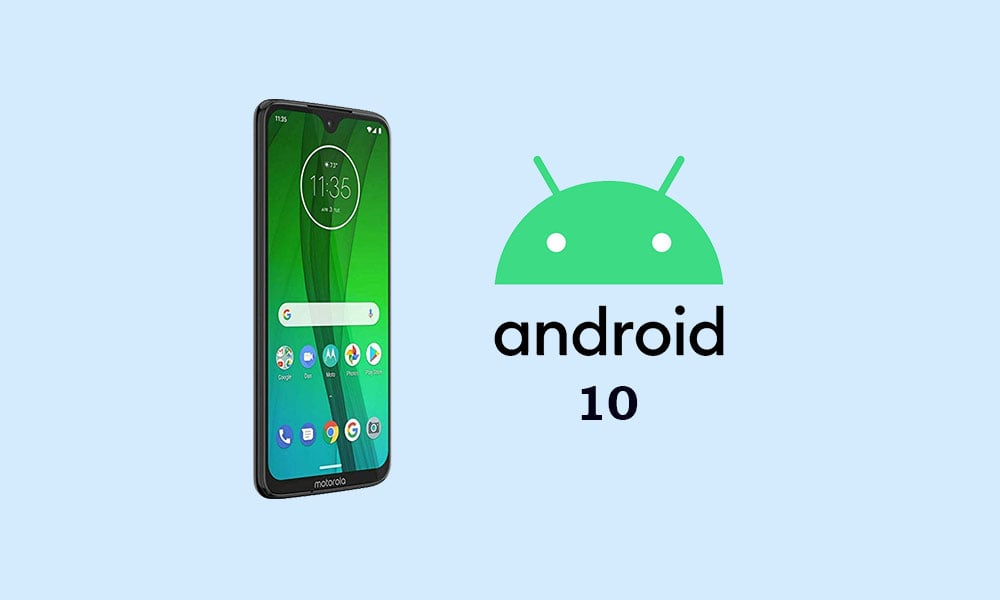 The update will soon arrive in other regions in batches. All the interested Moto G7 users should wait for the update and keep checking the software OTA update notification from the Settings menu.

Here is the download link for the latest Android 10 update that brings in all the latest and greatest Google has to offer for the Motorola Moto G7 device:

QPU30.52-16-2: The update started reaching Netherlands Moto G7 users with the same build number. Here is the screenshot shared by a user

Appearing in the Netherlands! from r/MotoG

Here is the complete guide on how you can download and install the latest Android 10 OS update on your Motorola Moto G7 smartphone.

So, there you have it from my side in this post. I hope you guys liked this post and were successful in installing the latest Android 10 on your Moto G7. Let us know in the comments below if you come across any issues while following any of the above-mentioned steps. Note that this guide is strictly for the Moto G7 only. Until the next post…Cheers!