According to the leaked report, the Moto G7 smartphone will come with a 6.4-inch display which is a big upgrade for the Moto G series smartphone, the Moto G6 series smartphones have a 5.7-inch display. The display of the supports 1080×2340 pixels of resolution and very small notch on top of the display. The phone powered by Octa-Core CPU on board along with unknown chipset. It will come with 4 GB of RAM and 64 GB internal storage under the hood. 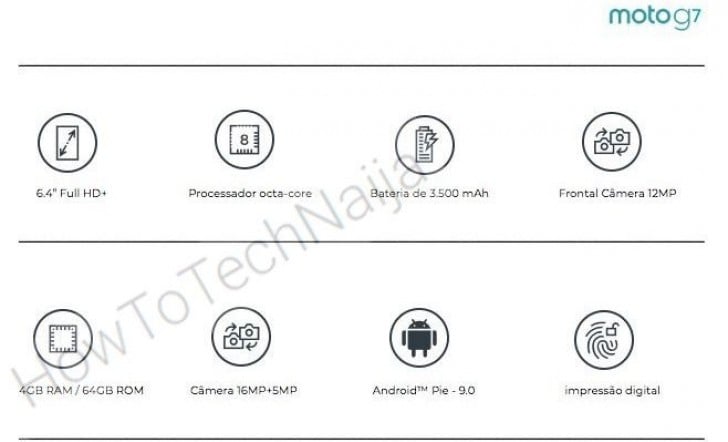 In terms of camera, previously leaked showed the dual camera setup on the back side, latest specs leaked reveals that the phone will come with the 16-megapixel main camera and 5-megapixel secondary camera on the back side. On the front side, it will have a 12-megapixel camera for selfies and video callings. The Moto G7 will run on Android 9.0 Pie operating system out of the box. It will have 3,500 mAh capacity battery inside the body. The phone expected to come with the company’s TurboPower fast charging technology feature on board. The Moto G7 will feature with a fingerprint scanner on the back side.