Users of Huawei devices were having a difficult time accessing its official page for generating bootloader unlock codes. The page disappeared into thin air overnight giving users a  404 Not Found error. Addressing the issue the company mentioned the issue via its Honor USA( @Honor_USA) Twitter handle. The tweet did not give out any specifics of the issue, the company asked for 24hrs of turn around time.

We’re looking at around a ~24hr turn around time when you submit your request. It is not ideal, we know. But want to continue to give users the ability and make the process easier versus reaching out to support. Thank you again – Tweet from Honor USA( @Honor_USA) mentioning the issue.

In the interim, they provided support for bootloader unlock codes via google docs. And people thought this was just temporary until Huawei fixes the issue. Instead, Huawei has put the final nail into the coffin for unlocking bootloaders starting with this event on 24th of May.

We're aware of the bootloader unlock page being down & apologize for the inconvenience it has caused. We have setup a form in the interim to request bootloader unlock codes. We thank you for your patience through all this. @xdadevelopers https://t.co/sF3JAtB3JL

So the hard truth about the issue is still unknown. But the outcome was coarse and unexpected. Huawei and Hornor devices have been favored by the developers and custom ROM  enthusiast because of its easy unlocking policy. You register up in EMUI forum, punch in your device details and you get the unlock code. It was that simple to unlock a Huawei branded device until now.

The Official Chop off

The Chinese manufacturer officially confirmed that it will end the support for unlockable bootloaders on May 24. The racket hits the devices that are launched after 24th of May 2018. Followed in 60 days for the devices released prior to that date. 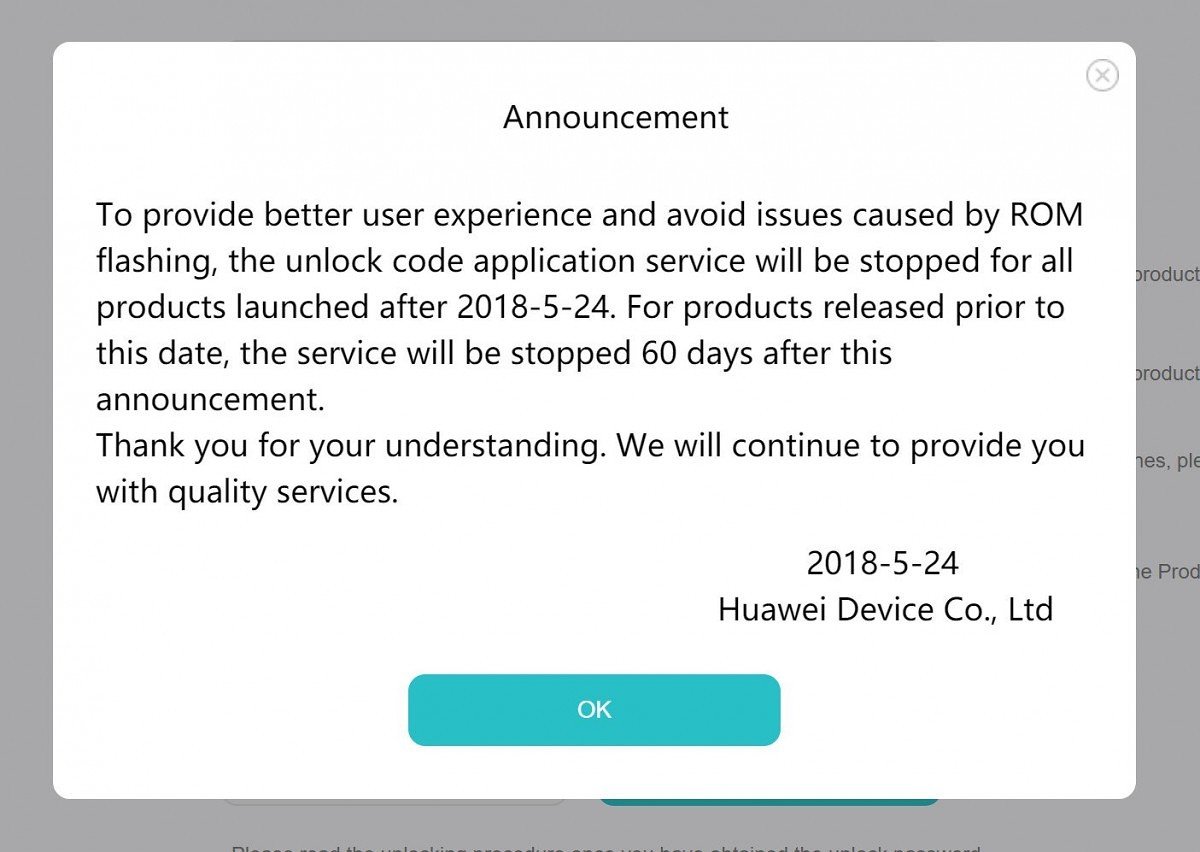 The above was the unexpected message from Huawei in the forum. Users were “greeted” with this message while trying to access Huawei unlock page. This happened on 24th and the company kept mum until androidauthority got the official response from Huawei on 25th.

In order to deliver the best user experience and prevent users from experiencing possible issues that could arise from ROM flashing, including system failure, stuttering, worsened battery performance, and risk of data being compromised, Huawei will cease providing bootloader unlock codes for devices launched after May 25, 2018. For devices launched prior to the aforementioned date, the termination of the bootloader code application service will come into effect 60 days after today’s announcement. Moving forward, Huawei remains committed to providing quality services and experiences to its customers. Thank you for your continued support.

As you can see and read, the announcement and the statement gives the same content. Committing to deliver the best user experience is always commendable. But what good sense does it make in cutting off the support suddenly?

Altogether, the bottom line is you have 60 days to do whatever stuff you wanna do to your Huawei or Honor device. You can unlock the bootloader, go ahead and install TWRP, custom ROM if you have. Provided it is launched before May 24, 2018.